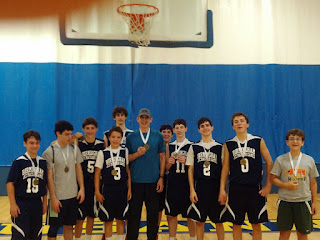 The Memphis Maccabi Games ended last night, and the Birmingham and New Orleans teams are bringing home some hardware, and some medals are also going to Jackson.

Birmingham’s Levite Jewish Community Center received its first-ever team gold medal yesterday, in boys’ 16-under basketball. The squad was seeded 12th after the preliminary competition, fourth out of six teams in the “Blue” bracket.

In the White division for seeds 1 to 8, 7-seed Mid-Westchester edged top seed East Hills/Sid Jacobson for the gold, 48-47.

The New Orleans 14U boys baseball participants were in two teams — paired with Atlanta and St. Louis. The Atlanta/Nola team took a silver medal, losing the title game to Ft. Lauderdale, 10-0. The St. Louis/Nola team lost in the bronze medal game to Memphis, 6-0.

In girls 16U basketball, Sarah Averbuch of Huntsville competed as Birmingham’s entrant on the St. Louis/Birmingham team. They placed fourth, losing to Israel in the bronze medal game, 47-31. Seeded third, they beat Philadelphia, 54-25, in the first round, before losing to eventual champion Boca Raton, 64-45.

The New Orleans/Phoenix/Chicago 16U boys soccer team lost the bronze medal game to Greater Washington/Ann Arbor, 8-4. They had lost to champion Philadelphia, 6-1, after defeating Dallas, 2-0.

A joint St. Louis/Atlanta/Birmingham 14U boys soccer team lost its first tournament game, 5-1 to eventual bronze medalist Memphis. The team, which included Gabe Ivker, was seeded last after going winless in the preliminaries, losing to LA-Milken, 7-0; Boca 7-1 and Mexico 6-4, and tying Memphis, 4-4. They did win the gold in the consolation kickball tournament.

The New Orleans/Greater Washington team lost to Peninsula, 5-0, in the 16U girls soccer tournament, but in a consolation kickball tournament, they won the gold medal. Seeded sixth, the team beat Memphis2, 9-0, but lost to Ft. Lauderdale1, 8-0, and Ft. Lauderdale2/Orlando, 3-2.

Birmingham’s Seth Cohen won gold in table tennis, going 10-0 in the preliminaries; and bronze in doubles table tennis after going 5-1.

New Orleans’ Emma Barron was on the bronze-winning Mixed 15-16 400-Yard free relay team with swimmers from Dallas and Ft. Lauderdale, and competed in the 50-yard freestyle, U14 girls.

In the second-sport 5×100 relay and 4×400 relay, Raphi Walker of New Orleans was part of the gold medal teams.

In girls’ 16U tennis, Stephanie Saag of Birmingham lost her first round match to eventual bronze medalist Alison Clarke. Saag and Owen Averbuch of Huntsville competed for Birmingham in doubles tennis. Birmingham’s Grant Ginsburg placed 4th in tennis after starting 2-0. 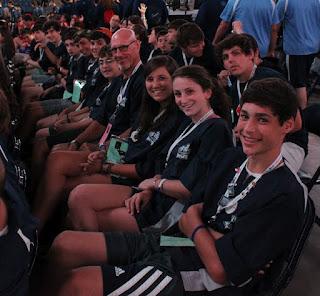 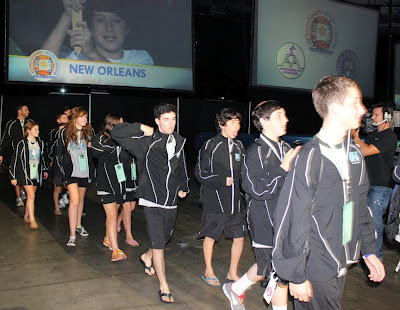 The week got underway on Aug. 5 at the FedEx Forum with an Olympic-style march of each delegation. About 1100 competitors from 30 delegations took part in the week-long event.

As part of the ceremony, organizers of the very first JCCA Maccabi Games were recognized. The first competition took place in Memphis in 1982, with about 300 athletes. The games returned to Memphis in 2002 for a 20th anniversary, and this year for the 30th. In all, about 3500 teens participate in three venues — this year’s games were also held in Houston this past week, and in Rockland, N.Y. this coming week.

Among the speakers was Josh Pastner, head coach of the University of Memphis basketball team, who said he had a couple of needs for this season. In a bid for solidarity with a team that has a Jewish head coach, he got the delegates to shout “Go Tigers!”

Uri Sheffer, head of Israel Sports and one of the 1982 Maccabi organizers, spoke after coming directly from the London Olympics, where he admitted that the Israeli squad wasn’t doing as well as hoped.

David Wottle, who won the 800-meter run at the 1972 Munich Olympics in a stunning finish against a Soviet sprinter, spoke of his experiences at the Games. He also introduced Oshrat Romano Kandell, daughter of Yosef Romano, one of the 11 Israeli athletes killed by Palestinian terrorists at the 1972 Games. Kandell said she was six years old when that happened, and spoke of the efforts to get the International Olympic Committee to recognize the attack. 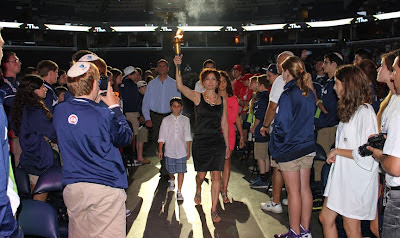 She and her family lit the torch starting the Games. Members of fellow slain Olympian David Berger’s family were also in attendance. Berger was a graduate of Tulane University.