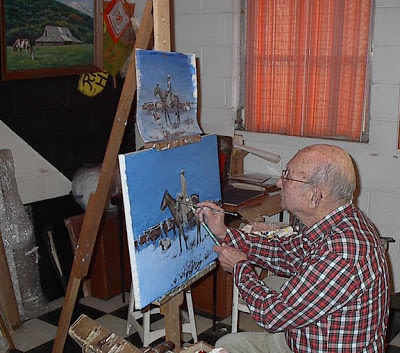 Nathan Glick, who had an illustration career spanning over 90 years, died on Monday in Birmingham at the age of 100.

His best-known work, aside from his combat artistry in World War II, is the set of bronze doors at the Alabama Department of Archives and History, where eight scenes from Alabama history are depicted.

Glick said a great deal of research is a key component to completing his works.
In 1918, at age six, the native of Leeds was already having illustrations published in the Birmingham News.

Glick said his mother, whose family was from Manchester, read to him “profusely.” In high school, he once again gravitated toward art, illustrating themes for the yearbooks at Sidney Lanier High School in Montgomery. Even then, he would research the themes so his illustrations would have accurate portrayals.

“I decided I wanted to be an illustrator,” he said. “I wanted to illustrate magazines and books.” His father wanted him to work in the auto parts business, but wound up accompanying him to New York as he began art school in 1928, at the age of 16.

His mother was more encouraging of his artistic career, he noted in a 2003 interview.

In New York, he sought out classes taught by Eric Pape. Pape brought him to the Players Club, where he met such luminaries as Charlie Chaplin and Basil Rathbone. He soon started designing costumes and hiring models.

When he completed art school, the country was in the depths of the Great Depression. When magazines were hiring illustrators, they looked at the “old-time professionals.” He had steady work in the theater, designing costumes for $35 a week.

Still, Alabama called, and he decided to return home to become the art director at Paragon Press. The company was starting a new phase of printing, and sent Glick back to New York to learn about the new technology, the photolithographic process, becoming one of its pioneers.

At night, he illustrated books on Alabama history, especially those written by Marie Bankhead Owen, director of the Alabama Department of Archives and History.

In 1940, Owen commissioned him to design the bronze doors for the Archives building. Glick said Owen chose him to do the doors because she felt he had done more research on Alabama history than just about anyone. “If you take the time,” he said, “you will find sources for your work.”

World War II soon brought another element to Glick’s work. He served as a combat artist for the Ninth Air Force, making illustrations for such publications as “Yank,” “Stars and Stripes,” “Life” and “Parade.”

Unlike many World War II journalists who stayed at the bars in Paris, then rewrote dispatches brought to them from the front by a military representative, Glick had to see what he was illustrating. On D-Day, he was on a B-26 bombing the beaches. “I came back that day and did a painting, which is exhibited somewhere.”

He also would do watercolors on the hood of a jeep. “You would get some of the background dirt that you wouldn’t otherwise get.”

After the war, Glick became associate art editor and illustrator for Progressive Farmer, a position he held for over 20 years. He was hired to replace four freelance illustrators.

Since his retirement in 1977, he has continued a wide variety of endeavors. He illustrated two books on Southern Indians, and painted 12 murals for the Forestry Museum in Broken Bow, Okla.

At Childersburg School, there is a mosaic of one of his drawings of Desoto. Glick noted there was a great deal of source material when he researched the subject.

Two or three journalists traveled with DeSoto and wrote about his adventures in detail. Later, others made careful drawings of the period, so when it came time for Glick to design the backdrops for the town at the Birmingham Museum of Art for a 2003 show, “there were any number of (Creek) town plans these people made in the 1700s” for him to draw from.

There are many elements to any illustration, he noted, such as clothing styles and the way people interacted. Looking at a piece he did entitled “Canterbury Pilgrims,” he said the armor for that period was different than for other periods.

Noting another piece in his collection, “Moguls destroying Baghdad,” Glick said “we forget Baghdad has been destroyed about seven times.”

He rarely did landscapes, but did one of a barn at Mount Ranier because the shape of the barn was unlike those back home.

His world travels are also chronicled in maps he drew after each journey.

One element missing from Glick’s illustration work? Judaic art. Aside from an illustration of a man wearing a tallit and tefillin, he has done very little Jewish-themed work. “In my particular field, there just wasn’t any call for it.”

In Alabama history, he has discovered a treasure of material for his illustrations. “We’ve got so doggone many cultures,” he said. Alabama has French, Spanish, British and Indian influences. “We have quite an interesting background here. People don’t realize it.”

He is also a Civil War buff. “You couldn’t help that if you’re interested in Alabama history.”

In 2008, the Southern Museum of Flight honored him at their first Southeastern Aviation Art Expo, and presented him with a lifetime achievement award, which was named after him for subsequent years.

Glick was preceded in death by his parents, Jane Klein Glick and Leo Glick. He is survived by his wife, Esther Weil Glick; daughters, Stephanie Lee and Roseanne Glick; son-in-law Leon Van Gelderen; and grandchildren Jenna and Will Van Gelderen. His life will be celebrated Oct. 18 with 1 to 2:30 p.m. visitation at Ridout’s Valley Chapel in Homewood, followed by graveside services at 3 p.m. at Elmwood Cemetery. A gathering of friends and family will occur at the Glick home after the service. Memorials may be made to the Birmingham Museum of Art.

(Editor’s Note: Much of this piece was adapted from an article we ran in April 2003).