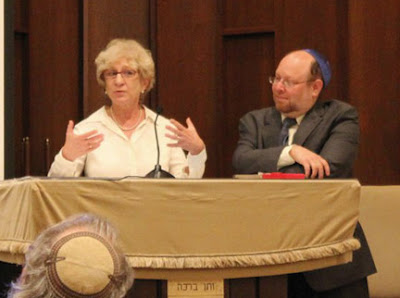 When journalist Jeff Lunden visited his parents in Silver Spring, Md. in 2005, and his mother told him about a Torah being dedicated at their congregation, Shaare Tefila, he figured there was an interesting story there. He didn’t expect that it would become a five-year odyssey that would result in a fraud conviction for the Torah supplier following a long series of his selling Torahs with fascinating rescue stories.

But that is exactly what happened as he and Martha Wexler wound up reporting “Rabbi to the Rescue” in the Washington Post Magazine in January 2010, exposing Rabbi Menachem Youlus and his Save A Torah organization.

The U.S. Attorney for the Southern District of New York would later describe it as an operation “which purported to ‘rescue’ Torah scrolls lost or hidden during the Holocaust,” and accused Youlus of “allegedly defrauding the charity and its donors of hundreds of thousands of dollars.”

In February, Youlus pled guilty in Federal court to mail fraud and wire fraud, admitting that stories of finding these hidden Torahs were made up, and that he diverted funds from the foundation to his personal use.

On Sept. 8 during Selichot services at Birmingham’s Temple Beth-El, Lunden and Wexler spoke about their role in exposing the fraud. This was a month before Youlus’ Oct. 11 sentencing, where he received 51 months in prison. He is to report on Dec. 17 to start serving his term.

Lunden was friends with Temple Beth-El Cantor Daniel Gale during their time as students at Oberlin.

Two Torahs that Youlus sold in recent years, each with their own incredible rescue tale, are now in use in Louisiana congregations (see related story).

When Lunden was told in 2005 about how the Silver Spring congregation’s new Torah had been lost at Auschwitz and surfaced six decades later, “it struck me as a made-for-radio story.” He contacted Wexler, who was a senior editor at National Public Radio, and they interviewed Youlus, who gave a “nail-biting adventure” of being told about an Internet ad offering a Torah for $17,000, but if nobody bought it within two weeks the seller would burn it and post pictures on the Internet.

According to Youlus, he rushed to Germany and met the seller, who had been a guard at Auschwitz. He beat a man who had brought the Torah on the train to the concentration camp and confiscated the scroll. Though Youlus had the funds, the seller demanded gold. Youlus arranged for gold through a friend in Russia, with the clock ticking away the final hours on the two-week deadline.

After several hours of waiting for the arrival of the required gold to purchase the scroll, Youlus ran out of the building, tossed the Torah to his associate, who took off in a different direction, then Youlus was attacked several blocks later and beaten by three men who were looking for the scroll. He and the associate met up later, left Germany immediately and started working on restoring the scroll.

“The story strained credulity,” Wexler said. Many details were missing. Youlus wouldn’t say what city he visited, even when it happened. He had not reported the attack to the police or the U.S. embassy, nor sought medical aid. “It seemed like a pretty extraordinary adventure. You’d remember it.”

They found no record of the reported eBay ad, and the German embassy had no record of a complaint filed against the attackers, which Youlus said he did after returning to the U.S. He hadn’t gone to the embassy or to German police after the attack, he said, because he just wanted to leave the country as soon as possible.

With extreme skepticism regarding the story, Wexler killed the interview and it never aired, though they played segments during their talk at Beth-El. She contacted the Maryland congregation to tell them they could not confirm the story and would not be running it, but they couldn’t authoritatively say it wasn’t true.

“We just dropped the matter,” Wexler said, but the two journalists kept an eye out for news about Youlus, building a library of articles about his adventures and more Torah dedications.

“It seemed there was a great similarity to a lot of them,” Lunden said, but there was “never a name, date or independent eyewitness to any of these events” in Europe. The breathtaking adventures to rescue Torahs gave him the nickname “the Jewish Indiana Jones.”

In 2008, when the famous Central Synagogue in New York City was set to dedicate a scroll that had been rescued from a cemetery in Auschwitz, donated by billionaire David Rubenstein, Wexler knew Youlus was involved “even before I read the name of the man who discovered the scroll.”

(An aside: Central Synagogue is currently working with the Institute of Southern Jewish Life in Jackson, many of their professionals are making trips to smaller Southern Jewish communities over this year).

Supposedly Youlus found it in a metal box, buried in the pre-war cemetery, in 2004. It was missing four panels, the story went, so he placed an ad locally looking for “parchment with Hebrew letters.” The next day, a Catholic priest came forward and said he had the missing sections.

Lunden said Rubenstein was looking for exposure in New York with the donation, “and exposure is what it got.” The story Youlus told “galled us,” and Lunden contacted the New York Times reporter who did the original story. The reporter admitted not fact-checking Youlus’ story and was not interested in pursuing it further. “That lit the fire under us,” and they decided to uncover the mystery.

They followed Youlus’ stories, including those in his own fundraising video, and figured they needed “the smoking Torah” that they could prove could not possibly have been obtained the way Youlus claimed. Actually, they needed three, and two of them came from the fundraising video.

Lunden said “He spun dramatic and thrilling tales about his adventures in Europe,” finding Torahs in cemeteries, hidden in church walls, and paying bribes to smuggle them out.” In 2004, donors contributed $1 million to Save A Torah “to underwrite his adventures.”

Wexler worked on the story that Youlus had stepped through a rotted floorboard of a barracks at the Bergen-Belsen concentration camp and found a hidden Torah underneath. Officials at Bergen-Belsen said there had been no such discovery in recent years, and besides, such a story was impossible. The entire camp had been burned by the British in May 1945 to stop a typhus epidemic. “There was no rickety barracks to fall through.”

Another rescued Torah was claimed to have been used by prisoners at Dachau, but the archivist there said there was no record of a Torah being used there during the war. Youlus also claimed to have found two Torahs in a mass grave of Holocaust victims. In their research, “congregation after congregation had one of the two Torahs — at least six of them,” Wexler said.

Another Youlus story had foreign policy repercussions. Youlus claimed to have smuggled a 400-year-old Torah out of Iraq through Jordan after a Jewish serviceman in the 82nd Airborne found it buried in the sand while digging a hole for a latrine. When the story came out, Iraqi officials were incensed, having recently been stung by the looting of artifacts at museums across the country after Saddam Hussein was toppled.

Army officials questioned Youlus, who then said the incident occurred when Hussein was still in power. Regardless, the 82nd Airborne was not in Mosul during either version’s time frame.

Then Wexler and Lunden started working on the Auschwitz story for the Central Synagogue Torah. Nobody in Poland was able to corroborate the story. Youlus had mentioned speaking to priests who had been at Auschwitz, but all priests who were around during the war had died long before Youlus’ presumed visit.

Wexler said it was “obscene” to exploit “communal grief over the Holocaust and communal love for the Torah.” Armed with their information, they went to interview Youlus for three hours. It was difficult for Lunden, as Youlus’ Judaic bookstore has been a fixture in Maryland for decades — it was where Lunden got his Bar Mitzvah tallis and his family got their Passover Hagaddahs.

Youlus was “maddeningly evasive” on specifics and claimed not to have kept any documentation of his trips — except for records of who had purchased scrolls. The only paperwork he submitted to Save A Torah was the invoice for each Torah.

Youlus had claimed he could restore 90 percent of rescued Torahs to a usable condition, far more than the Torahs that had been gathered by the Nazis and stored in good conditions in Czechoslovakia for a planned museum. Those Torahs were sent to England after the war, and are now on permanent loan to congregations around the world, including many in this region.

According to other scribes, it is impossible to restore a Torah that has been buried, because the ink would not stick to the parchment. And for a small operation like his, it was not physically possible that he could have restored 1100 Torahs, as he had claimed.

When asked about the Bergen-Belsen Torah, Youlus was happy to talk about it “at first,” but when they confronted him about the story, “he claimed the rabbi of that congregation (where it was dedicated) said Bergen-Belsen, but it really was from a different camp.” Which one? Youlus didn’t remember.

His passport records also showed that in the years he had been supposedly making all of these trips to Europe and the Middle East, he had never left the United States.

Wexler said they then approached the rabbis at the congregations where those Torahs were now. Many of the rabbis “had embraced the stories in meaningful ways.”

Lunden figures Youlus got a kick out of attending the dedication ceremonies.

After the initial story came out, Rubenstein hired one of the premiere experts on the Holocaust to explore the story about the Central Synagogue Torah he had dedicated — he brought in Michael Berenbaum, former director of the United States Holocaust Memorial Museum’s Holocaust Research Institute.

When Berenbaum could not confirm Youlus’ story, Rubenstein had Berenbaum obtain a Holocaust Torah that was beyond question, and it was dedicated at Central Synagogue in 2010.

Where did Youlus’ Holocaust Torahs actually come from? Wexler said many Torahs are sitting in defunct congregations across the United States. During the immigration boom a century ago, small congregations sprang up everywhere, they needed Torahs, and the place to get them was from Eastern Europe. The Torahs Youlus sold were pre-Holocaust Eastern European Torahs, “written before the war, but it is more likely they survived the Holocaust in Brooklyn rather than Bialystok.”

Many Torahs and pieces of scrolls are also easily available online. In recent years, a great many congregations have been using in-scroll microperforation identifiers with the Universal Torah Registry because of Torah thefts. This month, a rabbi on a moshav was indicted on Torah theft. In July, a scroll was stolen from a St. Louis congregation.

Wexler said the Youlus con “has caused us no end of reflection” on their responsibilities as journalists who happen to be Jewish.

“It sickened us that Holocaust denial websites picked up on this story,” she said, but “we have to preserve the integrity of this history.”

Menachem Rosensaft, vice president of the American Gathering of Jewish Holocaust Survivors and Their Descendants, told JTA. “There is very little if any difference between a Holocaust denier and someone like Youlus who exploits Holocaust memories in order to enrich himself.”