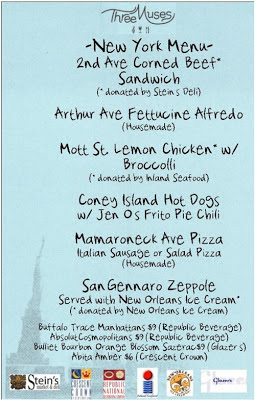 Forced to relocate to his native New York after Hurricane Katrina, New Orleans chef Daniel Esses knew he could not just sit by when Hurricane Sandy hit the northeast.

The Bronx native has put together a special menu that pays tribute to the New York of his childhood, and every Thursday this month — except Thanksgiving Day — it is available at Three Muses, with all of the proceeds going to City Harvest of New York.

“I know how they feel,” Esses said, having been through it in New Orleans. Before Sandy hit, he was on the phone to friends and relatives, calming them down and giving advice on how to prepare.

When the storm hit, “I was obviously distressed,” he said. He knew they were going to need help, “and we knew what help they are going to need.” He started to look at which charity “was going to do the best and help the way I wanted.”

He started talking with his partners at Three Muses about how they could help. “New York is a big part of who I am,” so he wanted to “show tribute to the city I grew up in.”

Three Muses “is a small place,” he said, “but I couldn’t not help.”

Esses grew up in the Riverdale section of the Bronx in a “fairly observant household.” He went to Jewish schools through high school, and after college set out to travel the country and start cooking.

He found himself in Napa in 2000, having a difficult time finding a place to live. Friends in New Orleans suggested that he join them “and bring the dog with me,” since “it’s a good food town” and much more affordable.

He got a job at Peristyle, “fell in love with the city and stayed.” He worked for John Besh at Café August and was sous-chef at Café Degas, then worked at The Bank Café. As the Bank Café was starting to make a name for itself, Hurricane Katrina hit and he wound up back in New York.

After a year and a half in New York, he spent seven months in France, then came back to the states looking for work. “My heart was more into New Orleans,” so he came back and worked at the Marigny Brasserie, getting back into the local culinary scene. After a while he started doing private catering and started a fresh pasta business.

Two years ago, Three Muses “needed a partner to take the reins of the food,” he said, and he has been there ever since.

Today, he said, people think of New York as the center of cutting-edge cuisine with some of the best restaurants in the world. That’s not what he wanted to highlight with his menu. “I grew up in the New York of the classics, the Jewish, Italian and Chinese neighborhoods.” Corned beef sandwiches and pizza were what he grew up with.

The special menu remembers “some of the neighborhoods I spent the most time in,” and some of those places were among the harder-hit. The Second Avenue Corned Beef Sandwich is a tribute to the Second Avenue Deli. The Arthur Avenue Fettuccine Alfredo is named for a street in the Bronx where there are many Italian restaurants; it’s also one of the few items he could eat in those restaurants since his was a kosher home.

The menu also includes a Coney Island hot dog, and the pizza is named for Mamaroneck Avenue, where his favorite pizzeria was. There’s a San Gennaro Zeppole, for the San Gennaro festival his family attended in Little Italy each year. It is served with New Orleans Ice Cream.

Rounding out the menu is Mott Street Lemon Chicken with Broccoli, a favorite of his for late nights at a restaurant in Chinatown.

Most of the ingredients for the menu have been donated. For example, Stein’s Deli donated the corned beef, New Orleans ice cream donated their products. That allows Three Muses to give the entire proceeds to City Harvest. “There’s a lot of generosity going on,” Esses said.

The New York menu is being offered in addition to the regular menu, he said, so some customers can have their regular items and perhaps select something from the New York menu to help out.

The first special menu day was held last week, and they have already sent the proceeds to New York, since City Harvest takes donations online by credit card. A public relations firm has donated time to spread the word.

He recalls the widespread “outpouring of support I got from strangers” after Katrina. He remembers seeing a girl selling lemonade on the sidewalk in front of a restaurant in Manhattan, with proceeds going to Red Cross. He approached her and told her that he had been displaced by Katrina, and how much what she was doing meant.