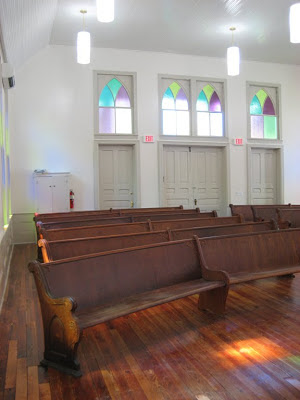 Though the Jewish community of St. Francisville faded into history long ago, the community’s effect on the Louisiana town is still celebrated today.

Local author Anne Butler will do a presentation on the history of Temple Sinai and the Jewish community of St. Francisville. A reception will follow at Grace Episcopal Church.

The St. Francisville Jewish community dates back to the 1850s, as the town became a cotton distribution hub. The first Jewish immigrant was Julius Freyhan, who would leave a large legacy. He opened Julius Freyhan and Co. dry goods, and after the Civil War he became a real estate speculator and opened cotton gins, opera houses, saloons and stores.

When he died in 1904, Freyhan left $8,000 for the establishment of the town’s first public school, which was named in his honor and was used until the 1950s. The original building burned in 1907 but was quickly rebuilt. It is located next to the Temple.

The successful businesses owned by Jewish immigrant families ran the gamut from Moritz Rosenthal the shoemaker to Max Dampf’s general merchandise store selling “dry goods, clothes, shoes, staple and fancy groceries,” from Abe Stern’s livery stable selling horses and mules to the fancy Meyer Hotel, from Morris Burgas whose dry goods store offered the highest prices for cotton and moss, to Freyhan & Co. which became the principal source of supply for dozens of Louisiana parishes and Mississippi counties, in a single year selling upwards of a million dollars worth of goods and handling some 14,000 bales of cotton.

Freyhan purchased land that would become the Jewish cemetery in 1891. Two years later, a group of Jewish merchants gathered to establish a synagogue, but it was not formally incorporated until 1901. Temple Sinai acquired title to the cemetery and began a campaign for its own building.

In January 1903 Temple Sinai was dedicated at 4740 Prosperity Street with a large interfaith crowd on hand. The congregation would be relatively short-lived. Temple Sinai had trouble attracting a full-time rabbi, and not much more success bringing in part-time rabbis from elsewhere in the state. When Rabbi Max Raisin left in January 1905, that marked the end of rabbinic services in the town.

Also affecting the community was a typical affliction of small communities. Many Jews left for opportunities in larger cities, and the children of those that stayed also moved on. In 1921, the Temple Sinai building was sold to the local Presbyterians, who used it until 1994, when it was transferred to the West Feliciana Parish Police Jury. The only known meeting of Temple Sinai after the building was sold was in 1940, to sell part of the cemetery property.

There are no Jews in St. Francisville today. Hannah Rosenthal Woods, a Catholic woman whose father was Jewish, took care of the Jewish cemetery until she died a few years ago. Her son now has taken it on.

Around 2005, the West Feliciana Historical Society Museum in the visitor information center added an extensive display about the Jewish history of St. Francisville. They also have a map with several sites including historic Jewish homes.

Around that time, Freyhan’s granddaughter, Pauline Friedman, died in California, leaving cornerstone funding to restore the Freyhan school. Joanna Sternberg, director of the Julius Freyhan Foundation, said the school project will be roughly $2.3 million.
In 2009, the Freyhan Foundation received a Save America’s Treasures grant that enabled the Temple Sinai restoration. Because it was a Federal grant, there was a lot of paperwork, which lengthened the process. “We’d just been waiting to get started,” Sternberg said.

The foundation partnered with Holly & Smith Architects in Hammond for the restoration. Sternberg said “They have been mindful about maintaining the character and details of the original structure and we think everyone will be pleased with the end result.”

The Temple building will be used as a multipurpose, non-denominational space for events and programs.

Though it will serve as a reminder of the Jewish community’s presence, items in the museum — such as the Temple’s marble cornerstone — will not be transferred to the building. Sternberg said the facility’s usage as a multi-purpose space makes that impractical, as there would not be a good space where the items can be displayed.

When the school building is restored, there may be space dedicated for memorabilia, but for now it will remain in the visitor’s center, where it is secure.

With the Temple finished, Sternberg hopes there will be renewed enthusiasm for the school project. “We still have money to raise.”