“You’re from where?” Southern Jews recall the 1987 March on Washington for Soviet Jewry 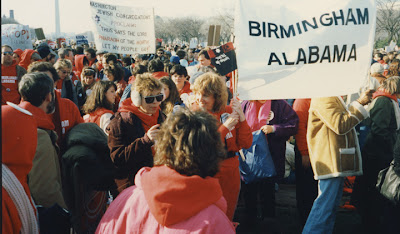 Shortly after it was announced that in December 1987, Soviet Premier Mikhail Gorbachev would visit Washington for a summit with President Ronald Reagan, a coalition came together to organize a mass rally on Dec. 6 on behalf of Soviet Jewry. Around 250,000 showed up for what has been called “the largest, best-organized protest rally in American Jewish history.”

Efforts are underway to recall the rally as its 25th anniversary approaches — especially because the movement’s success means the issue of Soviet Jewry has faded to history.

The movement to assist Soviet Jews started slowly in the 1960s and picked up momentum in the 1970s. Jews in the Soviet Union were discriminated against and could not leave the country. Applying for permission to leave generally meant losing one’s job and becoming seen as a traitor, and few applications were approved. Those who were turned down were called refuseniks, and they were open to charges of being social parasites, spies or traitors.

In the late 1970s, the number of Soviet Jews allowed to leave numbered in just dozens per year. High profile refuseniks included Ida Nudel and Anatoly (now Natan) Sharansky. Bar and Bat Mitzvah students in America would “twin” with Soviet Jewish teens, celebrating by proxy for those who were forbidden to observe Jewish rituals.

Sharansky recalls that in the Soviet Union, Jews were deprived of freedom, but also of their identity, as Hebrew schools, Yiddish schools, and Jewish theaters were all closed. “When I was growing in the Soviet Union… there was nothing that you can touch in your past, in your heritage, in your culture, in your religion — nothing,” he said.

The 1987 rally occurred during a backdrop of slow movement by Gorbachev to open up the Soviet Union, and the Jewish community wanted to be sure he got the message about Soviet Jews.

Birmingham had a delegation of roughly 85 that traveled to Washington together, and on that frigid day they were decked out in matching red sweatshirts that drew a lot of attention, including from Washington Post reporters. Steve Brickman told the Washington Post that “everything is matching, including our commitment.”

Sally Friedman, who heads the Birmingham Jewish Foundation, recalls that several people in the community expressed interest in going to the rally, and “we thought it would be a wonderful thing, to show our solidarity.”

One aspect she found exciting was that several children went on the trip. “Their parents thought it was important to participate,” and today the rally was an important influence on them.

A large contingent traveled to Washington from New Orleans, coordinated by Rabbi David Goldstein. He was already very active in the Soviet Jewry movement, having visited refuseniks in 1981, 1983 and 1986. Because he and his wife, Shannie, spoke Hebrew they were sent to groups of refuseniks that openly spoke Hebrew as a symbol of defiance. They weren’t concerned about getting into trouble, since in Moscow there were approximately 100 different languages on the street.

Some of the refuseniks the Goldsteins had visited had been released by 1987 and were at the rally, which amazed him. “People you never would have dreamed would be standing on the Mall in Washington” were there.

About 100 from New Orleans made their way to the rally. He noted that for several years Tulane University had been a hotbed of activity on behalf of Soviet Jewry.

Another person who had visited the Soviet Union before the rally was Judy Borisky Metzger of Birmingham, who had been there one month earlier. She told the Washington Post “You’re so much a part of it having been there.”

She recalls becoming “very emotional at my opportunity to actually ask that Gorbachev let new friends and ‘ my people’ leave the Soviet Union.” A family she had visited later wound up emigrating to California.

Jews came to the rally from literally everywhere. Holding the Mississippi banner was Janis Rabin, a New Orleans native then living in Jackson. She had gone to the Soviet Union for 17 days in 1984 with five other women, bringing suitcases filled with medications, Judaica, magazines, clothing, long underwear and sweaters.

In Washington, she recalls marching with Senator Tom Harkin of Iowa, and friends from Kentucky and Ohio. “To be part of this giant, really dynamic program was overwhelming,” Rabin said.

Margot Garon traveled from New Orleans with her friend Ann Fishman. Her husband was critically ill, but insisted that she go.

While at the march, a student from “one of the impressive universities” asked her why she was participating. She responded that she had been born in Germany and escaped the Holocaust at age 10 in 1937. “Just imagine, I told him, had people marched in those years and chanted ‘Let my people go,’ perhaps the world would have listened and responded,” she said.

Years later, on one of her trips to Israel she was in a Jerusalem synagogue for Simchat Torah, and “there in a middle of a circle I watched Natan Sharansky dancing with a Torah. I could not believe this miracle. I went up to him and had a warm few words with him and expressed my gratitude for his release.”

Vicki Lewis of Birmingham said it was a “most incredible Jewish experience, to be on the mall with thousands of other Jews from across the country, listening to Sharansky.”

Phyllis Nitzkin, now living in New Orleans, traveled from Rochester with her children with other members of their synagogue. “I was overcome by seeing so many Jews in one place and by the placards expressing our protest,” she said. This was her children’s first exposure to political protest, and they told her they were protesting a human rights issue, not a religious one.

Rabin and many in the Birmingham delegation still remember encountering a great deal of surprise from people who had no idea there were Jews in Alabama and Mississippi. Rabin said it was “an eye opener” seeing how many people thought that way.

After the rally, two prominent refuseniks who were finally able to leave went to New Orleans with Goldstein. Misha and Ilana Kholmyansky spent a week in the city, speaking at Tulane and other venues. Goldstein said about 100 members of the community who had not gone to the rally met them at the airport.

A community program marking the 25th anniversary will be at Tulane Hillel, Dec. 4 at 7 p.m., with Jerry Goodman, founding director of the National Conference on Soviet Jewry.

The rally “was a moment to make our voices heard. It was important to be there and be heard as a community,” Friedman said. While the raw numbers from Birmingham couldn’t compare to the delegations from New York and Washington, she figures that per capita, Birmingham likely had the largest turnout.

At the General Assembly last month in Baltimore, Sharansky said he was “puzzled” that there is little mention of the Soviet Jewry movement in religious schools.

“American Jewry lived through this, actively participated in this,” he added. “They did it. That is what is so surprising [about its lack of presence in Jewish education].”

It is said that the rally, coupled with Reagan’s repeated mentions of Soviet Jewry during the summit, irritated Gorbachev. Message received.

After the rally, the Soviet Union continued to disintegrate, with Eastern Bloc countries achieving their freedom in 1989, and by 1991 there was a full-blown exodus of Jews from the former Soviet Union. Roughly 1.5 million Jews would relocate to Israel, the United States and other parts of the world.

(With reporting from Jacob Kamarans/jns.org)