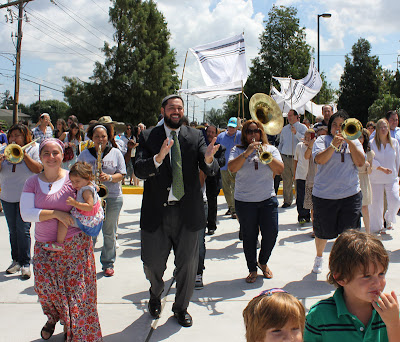 Rabbi Uri Topolosky, who has led Beth Israel through its post-Katrina rebuilding process in Metairie, announced that he will be leaving New Orleans this summer.

He informed the board on Jan. 1 saying he would not seek a contract renewal, and sent a letter to the congregation saying “It is with a broken heart” that they have decided to leave this summer “to seek a different educational and social environment” for their children. He noted that he is exploring several options, including being closer to family in Maryland.

This is a typical concern for Orthodox, and even Conservative, rabbis in many communities. In Birmingham, for example, many Orthodox rabbis would leave for larger communities when the oldest child graduated from the Jewish Day School.

Topolosky said “our hearts are broken because we understand how special this place is and we will miss it, and all of you, dearly.”

Topolosky came to the New Orleans community in the summer of 2007, less than two years after post-Katrina flooding inundated the Orthodox congregation’s building in Lakeview. It was the only synagogue in the New Orleans area that had to relocate and build anew from flood damage.

As part of the cooperative spirit in New Orleans’ Jewish community post-Katrina, the Orthodox congregation found a new home inside a Reform congregation, Gates of Prayer, until the dedication of a new building last August on land purchased from Gates of Prayer.

Topolosky is a native of Sharon, Mass., and also grew up in Silver Spring, Md. He studied in a yeshiva in Israel before attending the University of Maryland, where he was president of an Orthodox student group. He worked for Isralight, a birthright Israel group, before starting rabbinic studies.

He came to New Orleans after being an associate rabbi at the Hebrew Institute of Riverdale in New York. He was ordained at Yeshivat Chovevei Torah in 2005, and YCT founder Rabbi Avi Weiss came to New Orleans in late 2007 to install him in a ceremony that also marked the dedication of a fourth Torah, donated from families across the country to replace ones lost in the flood.

During his tenure, the congregation raised funds for the new building, negotiated the purchase of land next to Gates of Prayer, and dedicated five new Torahs.

When Topolosky arrived, he felt that different groups within Judaism should respect and learn from each other. He holds regular study sessions with Rabbi Robert Loewy of Gates of Prayer and Rabbi Ethan Linden of Shir Chadash, the community’s Conservative congregation. Recently, he and Linden spearheaded a learning weekend for Orthodox and Conservative rabbis from across the country, held in New Orleans.

This month, the three rabbis are teaming up for a three-part session on the Holocaust, held at the three Metairie congregations.

The Beth Israel dedication weekend was seen as a symbol for the Jewish world of cooperation among denominational lines, as the Torah procession started at the Reform congregation and wound up next door at the Orthodox congregation.

Topolosky also embraced New Orleans, even certifying the kashrut of one of the city’s symbols, the Café du Monde beignet.

Wife Dahlia, a psychologist, heads the New Orleans Parents Club for Jewish Family Service, which is now registering participants for the February to April workshop.

While the Topoloskys arrived six years ago with two sons, they added two daughters during their time in New Orleans.

“I am so proud of all this community has accomplished and I am honored to have played a small part in our great story,” he said, but added there is still unfinished work. The daily minyan needs to be strengthened, the Day School “bolstered” and a community mikvah established.

“I will assist in any way I can to ensure a smooth rabbinic transition period,” Topolosky noted. “We want you to know how much we love you and cherish this Beth Israel family.”