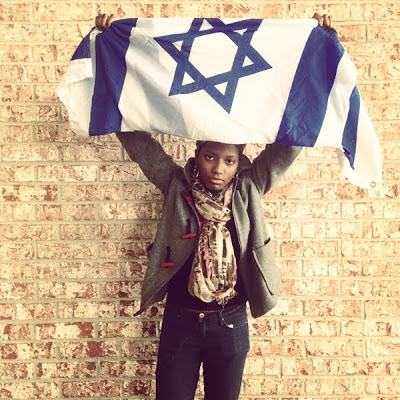 Unlike Tulane University across town, the University of New Orleans has a tiny Jewish student population and hasn’t seen a lot of pro-Israel activism. That is about to change in a major way, thanks to a 19-year-old UNO student — who isn’t Jewish.

New Orleans native Chloe Valdary, a sophomore majoring in International Studies, formed Allies of Israel last summer, and while the group currently has just nine members — though there are about 200 followers on Facebook — it is set for its first big event on Jan. 28.

“Declare Your Freedom” will be a “pro-Israel, pro-America” event, Valdary said. Daniel Pipes, executive director of the Middle East Forum and Campus Watch, will be the keynote speaker for the noon event at the UNO amphitheater. Long before the Sept. 11, 2001 terror attacks, Pipes was sounding the alarm about the threat of global jihadists.

Jazz great Kermit Ruffins is scheduled to start the event by playing the National Anthem, and jazz pianist Stephen Roberts will perform “Hatikvah.”

York Forsyth of the UNO College Republicans, Denny Schaffer of WRNO, Maor Shapira and Tulane University for Israel president Yoni Kaplan are scheduled to speak. Evan Sayet, a stand-up comedian who was the first creative consultant on “Politically Incorrect” and whose 2007 performance at the Heritage Foundation went viral, will also speak. He is author of “The KinderGarden of Eden.”

Valdary said the speakers will discuss “the importance of having a strong pro-Israel stance and also combatting anti-Semitism through innovative ways.”

Valdary grew up with an awareness of Israel in a spiritual sense. Her family is among a small group of Christians who keep Biblical laws, including Shabbat, the festivals and the dietary laws. That helped give her an affinity for the Jewish people and is “part of the reason why I do what I do today.”

Exposure to Middle East politics came much later. The first R-rated film she was allowed to watch was “Schindler’s List.” She read several of Leon Uris’ works, including “Exodus” as she finished high school.

A graduate of the New Orleans Center for Creative Arts filmmaking program, she started working on a script about the Middle East. Meeting another filmmaker who had done a project on Israel further kindled her interest, and she began studying international relations at UNO.

Last spring, “when the opportunity presented itself to do a research paper” on the Arab-Israeli conflict “I just jumped on it.” As she worked on it, she discovered the prevalence of anti-Semitism in the conflict and “it really began to terrify me.” She saw the “Orwellian” effort of those who “bow to the feet of Hitler” then turn around and compare Jews to Nazis.

She started Allies of Israel to advocate for a strong Israel, but also to fight global anti-Semitism, which is on the upswing and is at the root of the conflict.

As part of this effort, Valdary has launched “Once And For All,” which aims to take the fight against anti-Semitism into popular culture. She is currently trying to raise $10,000 to launch the campaign through “film, music videos, mixed media and other artistic measures” and take it worldwide from New Orleans.

“Film has the power to spark revolutions, change minds, and improve the lives of many for generations to come,” she said.

The first planned video will convey “the resilience of the Jewish people in the face of violent bigotry utilized by malevolent ideologues, such as those representing Hamas, the PLO, the PA, and various other groups holding the same malicious intent.”

She has a director who is interested in working on the project, and has partnered with a pro-Israel group in Britain to take it worldwide.

On the Jewcer website where the fundraiser is hosted, the highest-level donation of $3,000 or more is referred to as “Hamas’s worst nightmare.”

At the Jan. 28 event, a “Once And For All: The NOLA Campaign to End Anti-Semitism” poster, signed by New Orleans Saints quarterback Drew Brees, punter Thomas Morestead and several others, will be auctioned.

To fund the video, they will also sell T-shirts and bracelets that remember terror victims in Israel. Valdary wears a bracelet that reads “St. Sgt. Ehud Efrati. Killed by Terrorists 10-29-07. Age 34.” She said the victims of terrorism have often gone unnoticed.

General donations to the group are also welcome.

Recently, the American Israel Cooperative Enterprise did a study on anti-Israel activities on campus, and listed UNO as a place with an anti-Israel student group but no corresponding pro-Israel group. Valdary said she hasn’t seen an organized opposition to Israel at UNO, but there have been individuals who have approached her or otherwise registered their opposition.

She has met with local rabbis and others in the Jewish community, who have become involved with the group.

She noted that the African-American community has a lot in common with the Jewish community “in terms of our history” and “can advance each other’s interests if we work together.”

It is important for Jews and non-Jews to stand together in a united front, she said. “The world is filled with cold, callous people who do not give a damn about you or your well-being and would much rather see a whole nation-state perish than to live with his brother in peace,” she said.