It’s Southern clockwork: Every few years there is measurable snow in the Deep South. Every few years, a hurricane hits somewhere along the Gulf Coast. And every few years, some of our Baptist neighbors make a big deal of trying to convert us.

The latest manifestation came in the Jan. 24 issue of the Alabama Baptist, which had a cover story, “Sharing Jesus with Jews.” Much of the feature interviews an “Alabamian who serves as a Christian worker among the Jews,” who gives his view of how best to reach us. He speaks at length about the messianic movement, and the piece notes two Southern Baptist Messianic Fellowships, in Bessemer and Tarrant. In the article, his name was changed “for security reasons.” 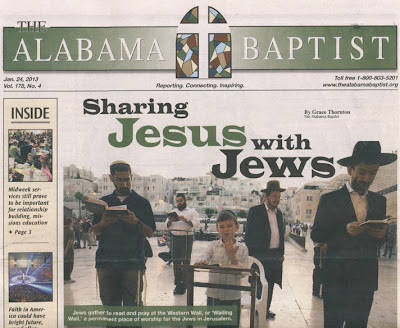 The piece lists Jewish populations in Alabama not only by county but by denomination.

One sidebar starts, “Jews in Alabama and the rest of the United States haven’t heard the gospel enough, and that’s because sharing with them is hard,” because we don’t see the gospels as divine. That shouldn’t be any more of a surprise than the Baptist rejection of the Book of Mormon or the Koran.

Haven’t heard the gospel enough? Anyone who thinks Jews in the Deep South are unfamiliar with the story of Jesus is clearly out of touch.

One way to supposedly appeal to us is to point out the Jewishness of Jesus and the apostles, appealing to our sense of mishpocha (family) since the Holocaust supposedly made us so distrustful of outsiders. Again, we know full well that Jesus and his early followers were Jews, but that doesn’t make him the Jewish messiah, any more than Bar Kochba, Shabbatei Zevi or Rabbi Menachem Mendel Schneerson, who also claimed or were believed to be the messiah and were all Jews.

In a particularly chutzpadik statement, the piece claims Jews must see belief in Jesus as acceptable in Judaism. To that end, it states groups like the messianic movement are becoming more accepted in the Jewish community — but that ignores reality. No Jewish community lists messianic groups as part of the community resources, nobody who professes belief in Jesus as divine counts toward a Jewish prayer quorum. It’s up to us, not the Christian world, to define who is a Jew and what is Judaism. With almost 2,000 years of precedent, we’ve made our view on the subject clear.

How can there be Jewish atheists and not Jewish believers in Jesus, the piece wonders. Simple — an atheist is regarded as struggling over or questioning the existence of God (which is acceptable in Judaism) but has not left the Jewish people. The believer in Jesus has adopted a separate belief system that is foreign to Judaism.

There is a fallacy that the only difference between Judaism and Christianity is over whether Jesus was messiah. Judaism does not allow for belief in a human being as God, or that God can be divided into parts. Jews have a direct relationship with God and are not to separate ourselves from God by putting an intermediary in between.

We do not hold that people are born sinners because of Original Sin, which is a cornerstone in Christianity of why man needs Jesus to intercede on our behalf. While there is a sacrificial system in ancient Judaism, a blood sacrifice has never been a requirement for forgiveness. Good and evil both were created by God; there isn’t a cosmic battle of God versus a different, evil entity — in Judaism, the rarely-mentioned figure of Satan is subject to limitations God imposes.

The article is critical of the notion that Jews still have a special relationship with God and need not be saved through faith in Jesus, but that is precisely the direction where more Christians are going today.

A decade ago, Southside Baptist Church in Birmingham opened its doors to Temple Emanu-El for over a year while Emanu-El’s sanctuary was being renovated. Rev. Steve Jones caught a lot of flack from colleagues, who were astonished he wasn’t using the opportunity of having so many Jews in his building as a chance to spread the Gospel.

John Hagee, who founded Christians United for Israel, has said it is “fruitless” to target Jews for evangelism. While he does not go out looking to convert Jews, he states that if a Jew were to walk into his church and inquire about Christianity, he would certainly answer — which is to be expected, and nobody should argue with that.

Many on the Christian Right now say that it is up to God, not them, to “turn the heart” of Jews and others toward Jesus, and the best witness is simply to set a good example.

Hagee has said that if he were walking in Jerusalem with an Orthodox rabbi and the messiah walked up the street, he knows one of them would have to make a radical theological transformation — but until then, we should work together on where we agree.

The article quotes a messianic lawyer in Jerusalem who bristles at the criticism that missionizing to Jews is a spiritual Holocaust. One must be careful to invoke Holocaust metaphors, but the end goal is the same — no more Jews. Of course, the missionaries are coming from what they consider extreme benevolence, since they are trying to share the ultimate truth and provide eternal salvation, not commit genocide. They say it is anti-Semitism not to try and reach Jews with the gospel, and their faith requires sharing the good news.

From our perspective, saying our faith, our very core of being, is deficient and needs to be replaced isn’t exactly being respectful. These same missionaries would have choice words for any Muslim who made a similar effort toward them.

Trying to reach us through redefining our faith and replacing it with a form of Christianity that wears a yarmulke and sprinkles in Hebrew words is identity theft (ironically, Birmingham’s messianic congregation is holding a program on identity theft in April. Insert your punch line here).

It is that hubris of having the only truth, and believing that everyone else must accept that truth, which led to centuries of persecution. Not far down the slippery slope was the rationalization that a few hours of torture in this lifetime is worth it to convince someone away from eternal torment in the next life.

But even with all the bluster, one fact remains: There are few Jews who formally convert to Christianity. A far greater drain on Jewish numbers is apathy and assimilation into nothingness.
So in a sense, stories like this one in the Alabama Baptist are a blessing in disguise — they remind us that we are different, they force us to pay attention to who we are and why.