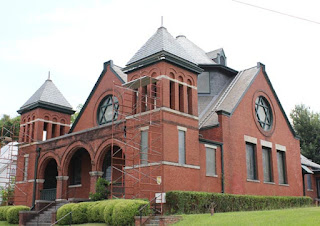 For this year’s Historic Selma Pilgrimage, there is an emphasis on the city’s Jewish heritage.

Many sites of Jewish interest are on the roster for the 38th annual event, which takes place March 15 and 16. The Jewish community, which now is but a handful of members, dates back to the 1830s.

They arrived on the bluffs of the Alabama River and established a variety of retail and wholesale stores. The newcomers contributed their time and skills to help build Selma into the “Queen City of the Black Belt,” and their names remained prominent.

A formal community was established just after the Civil War with the establishment of Mishkan Israel. In the early 20th century, an Orthodox congregation would also be established.

It is said that on the High Holy Days back then, one could roll a bowling ball down Broad Street and not hit anyone, since so many stores were closed.

The tour will include Mishkan Israel, which was built in 1899 and is known for its stained-glass windows, including one depicting Ruth, a rarity as synagogue windows generally do not depict human figures.

An effort is underway to raise money to preserve the Mishkan Israel building and eventually turn it into a museum and meeting space.

Also featured will be the Harmony Club, which used to be the Jewish social club. Located just steps from the Edmund Pettus Bridge, the club was founded in 1867. The current building was built in 1909 and later became an Elks Club. After years of being abandoned, it was purchased in 1999 by David Hurlbut, who started renovating it into a public space and private residence. It has been featured in the New York Times and HGTV, and he and Bill Tomey are continuing the restoration.

The building now also houses an Italian restaurant, and this summer will be the venue for a Bar Mitzvah party for the first time in decades.

Down the street, the Adler building will also be featured. It housed a Jewish-owned wholesale grocery and cotton business. Also on the list is the Kayser-Turner-Searcy House, an Italian Renaissance Revival home built by Jewish businessman Isadore Kayser. He owned Kayser Department Store, and this house incorporates ideas from his many travels.

The Koenigstahl-Williamson-Luker House is a handsome Queen Anne home that was owned by the family of Jewish businessman Levi Koenigstahl. The unusual mural on the parlor ceiling has been beautifully preserved.

New to the pilgrimage this year are the Downtown Walking and Shopping Tour and The Tin Man’s Gallery, studio of renowned folk artist Charlie Lucas.

Tickets and information will be available at the Vaughan-Smitherman Museum or online.