“Passover Pilgrimage” zips around the South 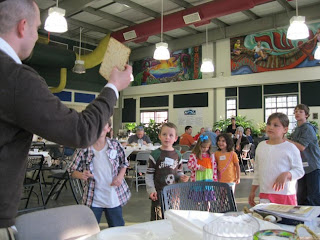 Above: On a previous Passover tour, Rabbi Marshal Klaven at Shalom B’harim in Dahlonega, Ga.

Nobody attends more Seders each year than Elijah, but the Jackson-based Goldring/Woldenberg Institute of Southern Jewish Life is giving it a try.

In their week-long journey across six states, Klaven and Zerwekh will conduct services, lead Seders, offer educational programs and facilitate dialogue for Jews and non-Jews in 14 small and often under-served communities throughout the South.

“Passover,” said Rabbi Klaven, “is a yearly reminder of how we must use our blessed freedom to enhance the lives of all, redeeming those still oppressed by forces large and small, internal or external. Collectively, we engage in this yearly reminder around the table, sharing God’s bounty with friends and family, neighbors and strangers alike.”

Klaven starts on March 21 at St. Phillips Episcopal Church in Jackson, then visits B’nai Israel in Natchez on March 22 and 23, Auburn’s Beth Shalom on March 24, and Beth Tefilloh in Brunswick, Ga., on March 25.

On March 26 he will be at B’nai Israel in Panama City, followed by Albany, Ga., on March 27. He will spend the weekend at Temple Shalom in Lafayette from March 29 to 31, finishing his tour on March 31 at Gemiluth Chassodim in Alexandria.

Zerwekh will start at Anshe Chesed in Vicksburg on March 25, followed by Beth Israel in Jackson on March 26 and the University of Mississippi on March 27. He will then travel to the Upper Cumberland Jewish Community in Crossville, Tenn., on March 28; then finish at B’nai Israel in Fayetteville, Ga., on March 29 and Rodeph Sholom in Rome, Ga., on March 30.

Passover starts at sunset on March 25 this year.