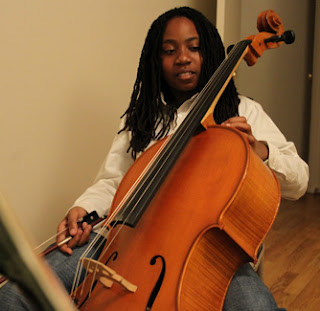 At the age of 11, Birmingham’s Malik Kofi is drawing a great deal of attention for his skills with the cello, as well as his academic and public speaking record. His musical talents have attracted the ear of Uri Bar-David of Philadelphia, who will be in Birmingham this week for an event centering on Kofi.

On April 23, the Birmingham Change Fund will host a sneak preview of “Little Music Manchild: The Malik Kofi Story.” The “against all odds” documentary was put together over the last few months by Malena Cunningham, former local television news anchor, after she saw him at a December fundraiser.

The 5 p.m. event at the Harbert Center will also feature a performance by Kofi and Bar-David.

Bar-David, a native of Israel who started training in classical music at age 7, is one of Kofi’s mentors. “He’s an extremely talented cellist, very creative, mature, has stage presence, is open to learning and has strong ideas of his own,” he said.

Bar-David joined the Philadelphia Orchestra in 1987. Inspired by visits to Jewish, Arab and Buddhist villages, in 2003 he founded Intercultural Journeys, a non-profit that is committed to presenting performances, conferences, master classes, lectures, and other interactions that provide opportunities for musical dialogue and understanding among a variety of cultural traditions.

Kofi was born in Birmingham and is being raised by his grandmother, Ruby Cox. She said Kofi was able to speak in sentences at eight months and read fluently at the age of two. He started cello lessons at age five with Craig Hultgren, cellist with the Alabama Symphony. He is also self-taught on keyboard, saxophone, guitar and African drums.

Cox home-schools Kofi. “”I tried sending Malik to school when he was six years old to first grade; it did not go well at all. In five short weeks, it was over.”

The April 23 event is to raise funds to further Kofi’s education and advanced musical training. Cunningham said “Birmingham is known for its rich musical heritage. Malik is an amazing talent destined to put a new focus on the Magic City in the classical music arena.”

Kofi hopes to attend Johns Hopkins or the Curtis Institute of Music, so he can pursue both his music and an outside career.

Tickets to the April 23 event are $50, and are available here.