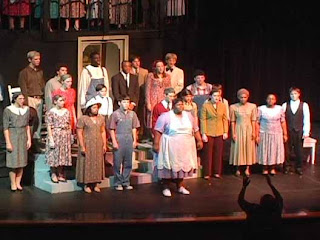 As part of the 50th anniversary commemorations of the civil rights struggles in Birmingham, the local Hadassah chapter is partnering with several local organizations to present “Our Mockingbird,” a documentary about the classic novel “To Kill A Mockingbird.”

The film will be screened at the Carver Theater on April 28 at 3 p.m. The date was selected because it is the 55th anniversary of a much lesser known chapter in Birmingham civil rights history — the attempted bombing of Temple Beth-El.

Boston filmmaker Sandy Jaffe returned to her native Birmingham to film the documentary, which centers on a production of the stage version of “To Kill A Mockingbird” by two high schools — predominantly white, suburban Mountain Brook, and predominantly black, urban Fairfield. Mountain Brook also has the vast majority of the area’s Jewish high school students.

Jaffe left Birmingham for college in Boston in the 1970s, where others immediately jumped to conclusions about her because of where she was from. She later rediscovered “To Kill A Mockingbird” as a reminder that “there were people ‘not all like that’ on the right side of history who would work to make things better.”

She filmed a Boston class that was doing a three-week project on the Harper Lee novel, then decided to visit Lee’s hometown of Monroeville, where since 1991 a local group has put on a stage version of the book. This year’s run goes through May 18.

The Monroeville version, done entirely by locals, begins on the lawn outside the county courthouse, then moves inside for the courtroom scenes. The 1962 film version modeled its courtroom after the Monroe County Courthouse.

The first time the Monroeville group performed outside the county was after a visit by the Israeli consul general from Atlanta in the mid-1990s. He invited them to perform at the Khan Theater in Jerusalem, where they had sold-out performances in 1996.

After seeing the play in Monroeville, Jaffe researched other venues that were doing the play. “On the Dramatic Publishing website I discovered that Mountain Brook High School was doing the play and I got in touch with Pat Yates, the drama teacher and director, who informed me about the collaboration with Fairfield. I knew that this experiment in crossing the divides of residential segregation would be something I wanted to include in my film.”

She said there are three themes to the film. First, how the novel itself still resonates “in our public discourse on race, class and justice.” Second is the view of Alabama, then and now. Third is the story of two very different schools coming together in what Yates described as “an exercise in empathy.”

Jaffe has previewed the film in Birmingham before, but being in the Boston area she has been invited to show it several times there. “Of course, I was curious about how audiences in the Northeast would react versus audiences in Alabama and what they have most in common is how intrigued they are by the high school collaboration.”

She hopes the film “will inspire similar collaborations like the high school production, not just in Alabama but around the country – that communities will create opportunities for students to actively experience “the other” in whatever context that might be.”

She hopes the film will be at film festivals and eventually broadcast. She is also planning a shorter version for educational uses.

“Mockingbird” is intertwined in Birmingham’s 1963 commemorations because though the film was released in 1962, it did not debut in Birmingham until April 1963, on the same day Martin Luther King Jr. launched the famous demonstrations.

The bomb that failed

This screening also commemorates an earlier chapter in the city’s struggle. On April 28, 1958, a satchel was discovered in a window well leading down to the social hall on the 21st Way side of Birmingham’s Conservative synagogue. The fuse on the 54 sticks of dynamite inside the satchel stopped just short of detonation, and at the time it was said that the bomb was large enough to level a city block.

Though fingerprints were obtained from the bag, the case was never officially solved or prosecuted. Sol Kimerling, whose father was president at the time, recalled a police officer standing in their living room stating that they knew who did it, but couldn’t do anything about it.

The day before, the Jacksonville Jewish Center was bombed, and the Jewish Community Center in Nashville had been bombed a month before.

Later that year, two men yelled at a janitor at Temple Emanu-El that they would be next. That same month was the most famous bombing of a Jewish house of worship, at The Temple in Atlanta.
Jaffe said she has little memory of those days, “but do recall that even as a child I was aware of the idea that those who hated blacks also hated Jews; that there were areas of town where Jews lived and areas where Jews were not welcome.”

Hadassah is coordinating with the YWCA, the Southern Literary Trail, the Birmingham Pledge, the Levite Jewish Community Center, P.E.A.C.E. Birmingham and City of Birmingham 50 Forward. There is a suggested minimum donation of $5.