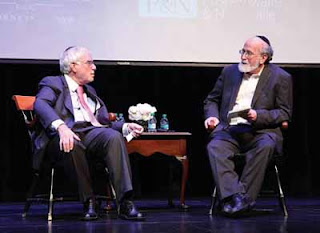 Professor Richard Stone and Rabbi Joseph Telushkin in New Orleans this past January.

Professor Richard Stone, a New Orleans native, is nearing the end of his two terms as chairman of the Conference of Presidents of Major American Jewish Organizations.

On April 22, the conference’s nominating committee named Robert Sugarman, the immediate past national chairman of the Anti-Defamation League, as its incoming chairman. The members will vote on the nomination this month, for the term beginning June 1.

Sugarman was a partner at the Weil, Gotshal and Manges law firm in New York City for more than 30 years until his retirement in 2007.

Stone became chairman on June 1, 2011. He is on the faculty of Columbia University Law School, where he has held the Wilbur Friedman Chair in Tax Law since 1991. He is also a venture capitalist. He is the chairman of NCSJ, which advocates for the Jewish communities in the 15 republics that emerged from the Soviet Union.

He has served as Vice President and on the Executive Committee of the New York JCRC and currently chairs its Government Relations Commission. He was the chairman of the Institute for Public Affairs, the public policy arm of the Orthodox Union, from 1992 to 2002 and served on the board and Executive Committee of JCPA from 2005 to 2009. He also served as Mayor Rudy Giuliani’s representative from Manhattan on the board of the City University of New York from 1997-2000.

In January, he and Rabbi Joseph Telushkin held a dialogue as the kickoff event for the Jewish Federation of Greater New Orleans’ centennial celebration.