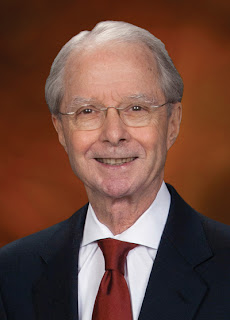 On Friday, heavy rain forced the 50th anniversary celebration at the University of South Alabama indoors, but that could not dampen a major announcement.

The anniversary celebration included Abe Mitchell’s announcement of a $50 million gift to the university, bringing the support by the family of local Jewish philanthropists to $93 million in total giving.

Half of the gift will support the Mitchell College of Business, while the other $25 million will endow an academic scholarship program for students in all fields of study.

The $25 million for scholarships is a challenge gift. It will match contributions by other donors on a dollar-for-dollar basis. Donors who make gifts of at least $10,000 will be able to name their scholarships. Should the entire challenge be met, this would mean $50 million to endow scholarships.

Mitchell announced that it would be called the Mitchell-Moulton Scholarship Initiative, in honor of retiring University President Gordon Moulton.

The university currently awards approximately 3,600 scholarships per year. The new $50 million would add up to 2,000 additional scholarships.

Students from the Mobile area who have an ACT score of 21 or 22 and 3.0 or better grade point averages would receive a one-time $1500 scholarship.

Mitchell said his decision to establish the new scholarship initiative was based, in part, on President Moulton’s expressed wish to create more academic scholarship opportunities before retiring from the University.

“Given the rising costs of attending college and the pressure this puts on students and their families, President Moulton told me it was his fondest wish as he completed his career that even further efforts be made to create additional academic scholarships,” Mitchell said.

“This new scholarship program is about ensuring that a quality higher education remains within financial reach of all our citizens. The emphasis is not only on the highest academic achievers who have many opportunities here and elsewhere, but also on those solid middle-achieving students, who traditionally might not receive academic scholarships.”

“Even before this latest gift, Abe Mitchell’s philanthropy in support of the University of South Alabama’s missions to enhance education, health care and the quality of life throughout the Gulf Coast, the state of Alabama and beyond, was almost incomprehensible,” said Moulton.

Moulton noted the gift is a record in the history of Alabama public higher education and would have “a transformational positive impact on USA’s ability to provide pre-eminent educational opportunities for countless people today, tomorrow and forever.”

“When I consider my investment in USA and the people it serves, I remain certain that I have received far more than I have given,” Mitchell said.

The Mitchell family has long been a major supporter of South Alabama. In the 1950s, Abe Mitchell and his late brother, Mayer Mitchell, formed a family partnership that became a highly successful residential and commercial real estate business throughout the Southeast. They sold their firm in the mid-1980s and it continues to thrive today.

Together with Mayer’s wife, Arlene, the three Mitchells have been involved in a wide range of philanthropic endeavors.

Mayer Mitchell was national president of the American Israel Public Affairs Committee, was active with the Jewish Theological Seminary and spearheaded the fundraising that led to the opening of the Ramah Darom summer camp in Georgia.

Mayer Mitchell served on the USA Board of Trustees for 32 years, including a term as chairman. After his death in 2007, Arlene Mitchell assumed his seat on the board.

The campus’ 10,000-seat basketball arena opened in 1999, and was named the Mitchell Center in recognition of their over $1 million gift.

The Mitchell College of Business’ library, dedicated in 2007, is named the Joseph and Rebecca Mitchell Learning Resource Center, in honor of their parents. Abe Mitchell gave $500,000 toward that project and met with other donors during the fundraising process.

In 2008, the USA Mitchell Cancer Institute opened one year after Mayer Mitchell’s death. In 2006, the Mitchell family gave $22 million to support the Institute, which had been a dream of Mayer Mitchell’s. In 1969 he had been diagnosed with Hodgkin’s and was given six months to live. He beat the odds by receiving cutting-edge treatment at the University of Rochester, and vowed that his hometown of Mobile would one day have a cancer center.

In December 2011, Arlene Mitchell made one of the largest donations to the USA athletic program, funding the Mayer Mitchell Quarterback Endowment.