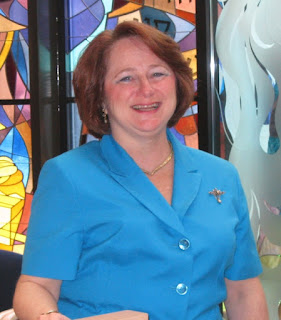 Cantor Sharon Kunitz, a native of Huntsville who was ordained as a cantor in 2009, died suddenly on May 22 during a visit home. She was 55.

Temple B’nai Sholom, her long-time congregation, was planning an oneg in her honor for this coming Shabbat evening. Instead, her funeral will be on May 24 at Laughlin Funeral Home in Huntsville at 10 a.m.

Kunitz was cantor at Ohev Sholom in Harrisburg, Pa., where she had served as student cantor during her final year at Hebrew Union College – Jewish Institute of Religion. Upon ordination she became the full-time cantor there. She is believed to be the first native Alabamian to be ordained as a cantor at HUC-JIR.

Kunitz’s family moved to Huntsville when she was one year old. She earned a degree in music therapy at Florida State University and a master’s in clinical and counseling psychology from Alabama A&M.

For many years, she was cantorial soloist and choir director at Temple B’nai Sholom in Huntsville, and was a vocal coach and music therapist. She was also active in local theater and the Huntsville Community Chorus.

Around 1990, she was asked what she wanted to do with her life, and she said she wanted to be a cantor but that could never happen, because she would never leave Huntsville.

Times changed, and a decade ago she decided to follow her dream and go to cantorial school. She consulted with B’nai Sholom’s rabbi at the time, Jeffrey Ballon, to start the admissions process at HUC-JIR. In June 2004 she left for Jerusalem as a member of that year’s incoming class, spending the year in Israel that is required as part of the studies. Many of her classmates were also in their 40s and 50s, looking for a second career.

At the time she noted that she would be 52 upon ordination, which would be its own challenge. Many congregations “want young and peppy. Well, I can do peppy, but can’t help the young part.”

While in cantorial school, she had an internship with the Goldring/Woldenberg Institute of Southern Jewish Life, Temple B’nai B’rith in Kingston, Pa., and The Jewish Home and Hospital in the Bronx.

In April 2012, she visited Huntsville to lead a women’s Seder. She arrived for this visit on May 18.

Last night she was taken to the hospital after an apparent heart attack. In the last couple of years she had heart problems, including surgery last December for a valve replacement.

Shortly after her passing, her Facebook page was filled with recollections from classmates, colleagues and friends from far and wide.

Rabbi Elizabeth Bahar and Rabbi Steve Jacobs will officiate at the funeral, and burial will be at Maple Hill Cemetery. There will be a memorial service in Harrisburg at a time to be announced.