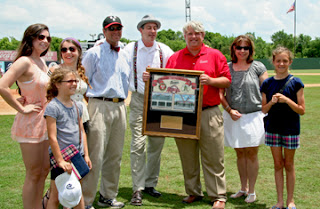 
With the initials and a nickname of “CB,” Curt Bloom was destined for the radio. The longest-tenured radio broadcaster in the 130-year history of the Birmingham Barons, the team honored Bloom this past Wednesday at the Rickwood Classic with induction into the Barons Hall of Fame.

“The Birmingham Barons have a lot of history and it is truly an honor to be inducted into their Hall of Fame, especially with a couple of players I have admired and with a good friend Ben Cook, who I worked with for years on radio shows,” said Bloom, who is Jewish and originally hails from New York.

He joined the Barons prior to the 1992 season, coming from the Huntsville Stars, also of the Double-A Southern League. Bloom was the broadcaster during the 1993 and 2002 Southern League championship seasons and the wild 1994 season when Michael Jordan was a Baron, and has twice been named Broadcaster of the Year.

“When my wife and I first moved to Birmingham in 1992, we felt very welcomed by the city and thought it would be a nice pit-stop. Like many others, early in my career the goal was to make the majors,” he said.

“Lauren and I started having kids. We quickly realized what an ideal place this was to raise the children. The city, along with the Jewish community, is so warm and generous. This is our home.”

Daughter Chloe will be a sophomore at the University of Alabama this fall where her mother teaches Early Childhood Education, and Alexis will be a junior at Pelham High School.

CB broadcasts every one of the Barons’ 144 games each season and his busy travel schedule makes it difficult to attend services during the season. But just about every Friday night during the off-season you can find him and his family at Temple Beth-El. “I am very proud of my heritage and the support we all have gotten,” he said. “Involvement in the Jewish community is very important to me and my family.”

Bloom is on the nominating committee for the Barons Hall of Fame and has a vote. The Hall of Fame also includes baseball legends Willie Mays, Reggie Jackson, Frank Thomas and Rollie Fingers. He said he did not vote for himself and was surprised at the nomination.

“I would be lying to you if I told you I didn’t at least have an idea that this might happen one day, especially considering my years of dedication to the team and the organization. I was hoping it would happen, but I thought it might still be a few years down the road. I am honored and humbled that it was my time,” he said. “It’s a team effort. This is dedicated to all the people who allowed me to be me and to come into their lives.”