“Kick that damn Jew out”: Meyer took heat for pro-integration editorial at Bama 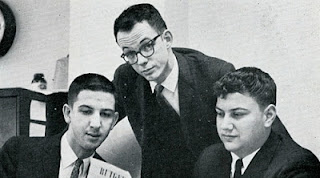 Editor’s Note: This is part of an ongoing series, Not Just Black and White: Civil Rights and the Jewish Community.

On June 11, 1963, one of the most famous bits of historical theater from the civil rights era played out in front of Foster Auditorium at the University of Alabama. Governor George Wallace, who five months earlier had vowed “segregation forever” in his inaugural address, made a symbolic stand in front of the auditorium door in an attempt to keep two black students, Vivian Malone Jones and James Hood, from enrolling and integrating the state’s flagship university.

Wallace eventually moved, on the order of Deputy U.S. Attorney General Nicholas Katzenbach, and the students were admitted. One student who was not there that day was Melvin Meyer, a rising senior who had already taken the brunt of inflamed passions over the issue of integration.

A Jewish student from Starkville, Miss., Meyer was editor of the Crimson White, Alabama’s student newspaper. On Sept. 27, 1962, he published “A Bell Rang,” an unsigned column calling for James Meredith to be admitted into Ole Miss, stating there was no moral grounds for not admitting a black student to the university, and court decisions had made integration inevitable. “If the bigot or the demagogue can muster a majority to turn on the Negro, will he necessarily stop there? Or will he next turn to the Catholic and the Jew, or the member of any other minority group?” the piece stated.

Meyer, known today as Murshid Wali Ali Meyer, said he had been approached by fellow Honors students Robbie Roberts and Richard Bouldin with a first draft of a piece Roberts had written. They told Meyer he could do whatever he liked with it.

“When I read it I felt a strong response to publish it because it felt right to do so,” Meyer said. “The idea hadn’t occurred to me but once seeing it I knew I wanted to go forward with it. My experience growing up in a small town in Mississippi as a Jew had somewhat shaped me as an outsider looking in on the society as an observer and not being totally absorbed in its values.”

They figured the column would stir some controversy, but Roberts was afraid that his father, who worked for the university, could be harassed or lose his job if his name was on the piece. Meyer “told him that as the editor I was glad to take the heat for it and he was never identified as being the main writer of it until many years later.”

They had no idea how vociferous the reaction would be.

On the one hand, Meyer was praised across the country for his courage. The New York Times interviewed him, he was invited to speak at a Columbia University symposium and the U.S. Student Press Association — headed at the time by Roger Ebert — named him college newspaper editor of the year.

The reaction back home wasn’t anywhere near as positive. “We received hundreds of hate mail letters at the paper which we printed with a liberal sprinkling of (sics),” he said. “The Ku Klux Klan burned a cross on the lawn of the Zeta Beta Tau house. They called me to let me know; I had an apartment off campus.”

Meyer was told that George Wallace, who would be inaugurated as governor in January 1963, called University President Frank Rose to demand that the university “kick that damn Jew out of school.” That did not happen, but armed guards were assigned to him and to watch his activities. They “certainly were a lead weight on my life and that of my friends,” he said, “frisking people, not letting me start my car without checking for bombs, telling me where not to go, reporting to the University on my activities, and cooperating with the University’s efforts to censor the newspaper.”

The university asked him to retract the editorial, which he refused to do. There was a discussion of stripping him of his position or even shutting down the paper.

The guards filed reports of his activities every day. The reports are now available at the university’s archives, detailing the mundane daily life of a typical student.

Meyer did not trust his bodyguards. “They were retired detectives from Bull Connor’s Birmingham police force,” which was filled with Klansmen, “and they were supposed to be protecting us from the Klan. But they were bigger than life size characters that we generally found more humorous than dangerous.”

A visit home for Spring Break further “broke the shell of my isolation from people of different races and customs and increased my empathy for the suffering of others,” he said.

Klan sympathizers had burned a cross on his mother’s rose trellis as a warning. His father, Henry, who had bought the Starkville News with his brother in 1946, also faced repercussions. Along with the paper, he had a printing and business supply company. Years later, Henry Meyer finally let his son know that when the controversy raged, the county board of supervisors asked him to stop his son from making trouble, and when he refused they stopped giving him the county’s printing business.

“It was probably a big factor in him deciding to sell his business a few years later, some time after which he started the journalism department at Mississippi State,” Meyer said. The student media center was named in Henry Meyer’s memory in 2003.

Another incident while visiting home also “cracked my shell.” There was no real social interaction between whites and blacks, so it was a shock when, while making a delivery to a black woman who did their laundry, “she felt emboldened to show her true feelings — something that just wasn’t done.” She was crying joyfully at the news that Meredith was going to be re-admitted to Ole Miss.

“After that time I was always interested in really getting to know those who seemed very different but that I didn’t really know firsthand,” he said.

While the national ZBT was celebrating Meyer’s stance, there was resentment at the all-Jewish Alabama ZBT house for the negative attention Meyer brought. One fraternity brother who was particularly “pissed off” at the disruption was Joseph Levin, Jr. But the Montgomery native, who had previously just seen himself “as a white Southerner” had an awakening. “I had not experienced that kind of naked hatred. Once my eyes were opened, I couldn’t ignore others who were persecuted around me.”

Levin says the controversy over Meyer motivated him to be a co-founder of the Southern Poverty Law Center in Montgomery — and part of the SPLC’s successes over the years has included putting the United Klans of America out of business through a lawsuit.

While Meyer is receiving a lot of attention on the 50th anniversary of university integration in the South, he said “ It is people like (Levin) who stayed in the South and worked to transform things that deserve the publicity and credit for societal changes.”

By winter break, things had settled down for him in Tuscaloosa and he could leave his guards behind. The following June would be the Stand in the Schoolhouse Door, and as the time drew near “the university arranged things so that I wouldn’t be there” as a possible lightning rod. They offered him a plum internship at the Peace Corps in Washington, and “I was happy to accept it. I had no plans to stick around for the summer to be a part of the choreographed proceedings of Wallace’s stand.”

He did meet with Hood and Malone, wished them well “and that was sufficient for me.”

Looking back, Meyer feels racial progress came not through the legal battles over integration but through that most Southern of things — sports. While there was resentment over “forced integration” being imposed, “integration led to integrated sports teams, and rooting for your team and its really good black players changed people’s attitudes a lot.”

Meyer also experienced many changes in the 50 years since the battle for integration. As a senior he stopped working for the Crimson White and pursued philosophy. He was vocal in opposition to the Vietnam War, and went to Vanderbilt to study graduate-level philosophy.

His dissertation was to be on “Cosmic Laughter,” but he wanted to find mystical experience, not philosophize about it. In 1968, he became a disciple of Murshid Samuel Lewis in San Francisco, soon becoming Murshid Sam’s esoteric secretary. Murshid Sam initiatied Meyer as a sheik on the Sufi path in 1970. Lewis, who died in 1971, was the son of a Levi Strauss vice president.

For 40 years, Meyer has taught Sufism — a mystical form of Islam that welcomes “all spiritual seekers on all paths toward God” — at camps, retreats and workshops around the world. He headed the humanities department at the Tandem School in Virginia for eight years, then returned to Khankah Sam, a residential community of practitioners in San Francisco.

Meyer now serves as director of the Esoteric School of the Sufi Ruhaniat International.

He no longer has any family in the Deep South and has not been back in many years. Thirty years ago, he visited Starkville and was asked by his father what he noticed that had changed. U.S. Highway 82 had been renamed for Martin Luther King Jr., where it was previously named after Robert E. Lee.

“Such a change had pretty much passed unnoticed,” he reflected.