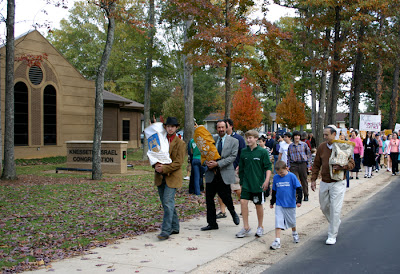 Three weeks ago, the Knesseth Israel team at the Temple Beth-El/Piggly Wiggly When Pigs Fly Kosher BBQ Contest in Birmingham used a disco theme with the name “Staying Alive.”

After months of having a “for sale” sign outside its new building, Birmingham’s Knesseth Israel synagogue announced that it is indeed staying alive, in its current building.

On June 5, Rabbi Eytan Yammer and President Leslie Kahn announced that the congregation “has a home for the foreseeable future,” which will become the Fred and Brenda Friedman Center for Jewish Life.

“The exact details of the arrangement are still being worked out,” they noted. The building will also be “a place for Birmingham’s Jewish organizations to hold events, communal and educational programming.”

A congregational meeting will be held on June 16 at 12:15 p.m. to vote on the proposal. It will be followed by KI’s already-planned Father’s Day event at the Birmingham Barons, with a cookout at KI at 1 p.m., followed by the Barons game at Regions Field downtown at 3 p.m.

The news was greeted with great relief throughout the community, as the congregation’s financial struggles had been a subject of conversation for quite some time.

Jimmy Filler, who just finished a four-year term as president of the Birmingham Jewish Federation, said in a report to the community on June 6 through Federation’s Update that two weeks ago he “got a funny feeling” as he saw the “for sale” sign, knowing that the congregation was running out of time and options with the bank.

He asked if Birmingham would “still be a great community if we lost our Orthodox congregation and part of our community’s soul?”

Filler added that he is the first to admit that “many financial mistakes were made by Knesseth Israel” during the process of building and moving to the current location.

The project’s cost exceeded that of two other similar-sized or somewhat larger regional congregations that have built in that time-frame — Beth Israel in Gulfport and Beth Israel in Metairie, both of which were replacing buildings made unusable by Hurricane Katrina and its aftermath.

After discussing the situation with his wife, Filler called Brenda and Fred Friedman, who “have been extremely interested in Knesseth Israel for years as well as the future of our overall Jewish community.”

After a lengthy meeting, they determined that they could “pull off this mitzvah” and would create the center, which would allow KI to use areas of the building “in perpetuity.”

There are no firm plans yet regarding other uses of the building, and there is work to be done to formalize the arrangement.

The state’s only non-Chabad Orthodox congregation, Knesseth Israel moved into the new building in 2007 after several years of planning.

Extensive roof leaks were just part of the huge maintenance problems in the previous building. At first, the plan was to rebuild at its former location on Montevallo Road, where a pillar had stood in the middle of the yard as a cornerstone for the future permanent building that would replace the temporary sanctuary that wound up being used for half a century.

In 2004, a groundbreaking was held and the sanctuary and office wing was torn down, with the congregation dividing the remaining social hall into three sections as a temporary home.

Drainage issues on the property threatened to add greatly to the cost of rebuilding, and the lack of affordable housing in the neighborhood around the Birmingham Country Club, necessary for expanding the congregation by attracting young families, led to exploring a location on Overton Road, just down the street from the Bais Ariel Chabad Center.

For the congregation where many members walk on Shabbat, this also meant many congregants had to move to the new neighborhood.

The congregation voted three-to-one in December 2005 to move to Overton Road. Site work began in September 2006 for the new building.

Founded in 1892 as the city’s first Orthodox congregation, Knesseth Israel was the last of the city’s congregations to leave the “old neighborhood” on the Northside, moving to Montevallo Road in 1955. The congregation currently has fewer than 100 families.

There was a fundraising campaign for the new building, bringing in over $5.4 million from congregants and the broader Jewish community. In addition to rising project costs, the congregation had anticipated a large sum from the sale of its previous property due to its prime location, but after the congregation moved in 2007 the real estate market collapsed. The Montevallo Road property finally sold in early 2012 for much less than was originally envisioned.

After struggling to make payments on the building and reworking the debt, the congregation was forced to make dramatic steps last summer. In a letter to congregants a year ago, it was stated that “about $8 million” was invested in the Overton Road property, and the bank was owed over $3 million.

For a year, the building has been on the market for $5.5 million as part of an arrangement with the bank, though the congregation has been able to remain in the building in the hope that a solution would be found. There were attempts to entice other Jewish community organizations or a business to purchase the building and let Knesseth Israel remain as a tenant, but that did not happen.

If the building had sold and the new owner did not want to keep KI in the building, the plan was to use proceeds from the sale to pay off the debt and relocate in the immediate area, possibly a house that could be used as a synagogue.