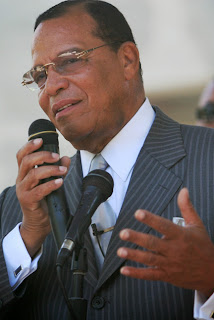 (Updated June 26 to reflect court decision, add NOI reaction) The issue may have been preservation of Section 5 of the Voting Rights Act, but the buzz at a series of rallies in Alabama today was clearly the presence of Nation of Islam leader Minister Louis Farrakhan.

The controversial figure, who has a history of anti-Jewish, anti-gay and anti-white statements, was brought in by the National Coalition of Leaders to Save Section 5, a coalition of mainstream civil rights organizations to boost their caravan protesting a case currently before the U.S. Supreme Court.

Jewish groups, which have generally supported Section 5, voiced their discomfort at Farrakhan being brought in for these rallies, and at stops in Birmingham and Montgomery, Farrakhan and supporters fired back.

Though Farrakhan generally brushes aside the notion that he has an obsession with Jews, shortly after his appearance many leaders in the Birmingham Jewish community were emailed “Birmingham Jews Attack the Honorable Minister Louis Farrakhan,” which contained an extensively-researched, if misleading, report, “The Secret Relationship Between Alabama’s Blacks and Jews.”

The title is similar to a set of books published by the Nation of Islam which tries to prove that Jews controlled the slave trade.

In the Alabama report, the history of many prominent Jewish families in the state was described as proof that “Jewish history of anti-Black hate and terror goes back to the Alabama slave trade.” Names listed included Proskauer, Moses, Lehman, Engel, Sterne, Denaburg, Hanan, and Rabbis Newfield and Grafman, among several others.

The Nation of Islam newspaper, Final Call, also wrote in terms of Alabama Jews versus Farrakhan in the article “Farrakhan is right, Jewish interference is wrong.”

In Montgomery, Farrakhan criticized Birmingham Jewish Federation Executive Director Richard Friedman, who wrote an op-ed prior to Farrakhan’s appearance. “Those are the real haters, Mr. Friedman, that you should be talking about. They are your brothers who worked us on the plantation from ‘can’t see morning to can’t see night.’ That’s why you are rich and powerful because you worked us. So don’t talk to me about hate! Go look in the mirror because you hate the fact that my people are growing to love me in spite of you wanting them to hate me!”

He also stated that Jesus said “God will take the kingdom from you and he will give it to another and he didn’t just say another, he said another nation that would bring in the fruits thereof.”

The legal issue revolves around Shelby County vs. Holder, which was heard at the Supreme Court in February. Shelby County, just south of Birmingham, seeks a ruling that Section 5 “preclearance” provisions are unconstitutional. For 16 states that have a history of issues regarding voting access for blacks prior to the 1965 Voting Rights Act, any changes to voting must be cleared with the Justice Department. That includes changes from district borders to the location and hours of voting precincts.

Congress reauthorized the provision in 2006, but Shelby County says that level of bureaucracy is no longer needed to eliminate voting discrimination.

On June 25, the court did not strike down Section 5, but instead struck down Section 4, which is the formula for determining which jurisdictions would be subject to preclearance — ending preclearance unless Congress takes action.

At the rallies, the issue was framed in terms of “rolling back the clock” to 1963 and that overturning Section 5 would result in efforts to take away the vote from blacks.

The rallies began at Kelly Ingram Park in Birmingham, where the 1963 civil rights demonstrations took place. The park is diagonal from the Sixteenth Street Baptist Church, where caravan organizers originally said the rallies would begin. However, church leaders said they were never consulted and hosting Farrakhan would be contrary to the church’s position as a symbol of reconciliation.

Many of the speakers still invoked the name of the church and the four girls who were killed in September 1963 when the church was bombed.

The caravan then continued to the Shelby County Courthouse, the Edmund Pettus Bridge in Selma and the State Capitol in Montgomery.

When the announcement of Farrakhan’s visit was first made a week earlier, the Birmingham Jewish Federation reached out to black leaders in the region and urged them to not embrace Farrakhan, and wrote to caravan organizer State Sen. Hank Sanders stating that while the Federation respects “your efforts to draw attention to the important issue… we regret that Farrakhan has been chosen to help lead this effort.”

Sanders responded to the Federation that “We welcome everyone who will stand with us to protect this basic right — the right to vote, which is under great attack.” He noted that Jews were not prevented from voting for 100 years “as our people were. It is a terrible thing that I hope Jewish Americans never have to suffer.”

Sanders said the Federation was trying to bar Farrakhan because of his exercise of free speech. “The words you attribute to him are offensive, but it is his constitutional right to speak. (Additionally, he has denied many of the allegations.) I do not fault you for objecting to offensive language.”

He noted that the Jewish community has not stood with the group in its series of events regarding Section 5, but “Now you ask us to reject someone who believes in our fight for the constitutional right to vote and is coming to stand side by side and fight.”

Bill Nigut, Southeast regional director of the Anti-Defamation League in Atlanta, said while the ADL has frequently spoken out in favor of extending Section 5, “the inclusion of Louis Farrakhan in this campaign is a terrible mistake.”

The Southern Poverty Law Center in Montgomery, which monitors hate groups, considers Farrakhan a “black supremacist” and lists the Nation of Islam as a hate group. The SPLC does support Section 5.

According to Federation Executive Director Richard Friedman, who attended the Birmingham rally, “particularly frustrating… has been the unwillingness of black elected officials to step forward and distance themselves publicly from Farrakhan” and condemn his anti-Semitism as Michigan Rep. John Conyers recently did days after attending a Farrakhan speech in Detroit.

One local elected official told the Federation he would not associate himself with Farrakhan, but would “remain publicly silent.”

Many of the speakers at the Birmingham rally, noting the Federation’s initiative, spoke derisively of “scared Negroes” who did not want to be seen with Farrakhan.

While several speakers alluded to the controversy, local activist Frank Matthews, known as “God’s Gangster,” met it head-on. “We don’t care what Jewish Foundation or Federation or no house negroes that didn’t want us to have the minister here… (Farrakhan) has a home, as long as he lives, in Birmingham.”

Some media reports erroneously stated it was the Birmingham Jewish Foundation, instead of the Federation, that was concerned.

State Rep. Mareka Coleman said “some folks are scared because Minister Farrakhan is here today. I stand before you to tell you that I ain’t scared.”

She noted that 50 years ago, her mother stood in the same place “fighting for the exact same thing,” which means “something is wrong here.”

Farrakhan said that white people are “not happy with the rise of our people in America” and “don’t have the will to allow you to vote uncontested.”

Farrakhan stated that having a law like the Voting Rights Act without any sort of enforcement mechanism makes a “mockery” of law. Overturning Section 5 would lead to long, expensive court battles as “recalcitrant” individuals try to take away voting rights. “We want laws enforced. We want justice,” he said.

In Montgomery and Birmingham, he stated that he was not an anti-Semite, but “I just don’t like the way they misuse their power.”

“I did not deprive any Jewish person of the right to worship God in the manner that they choose,” he said. “But to bomb a church is the epitome of hatred and total disrespect. That did not come from Louis Farrakhan.”

In Montgomery Farrakhan directly addressed Friedman’s appeal for others to disassociate themselves from him. “How arrogant that sounds from someone that lives in Alabama,” he said.

Charles Steele, CEO of the Southern Christian Leadership Conference, whose first president was Martin Luther King Jr., introduced Farrakhan. Were it not for Farrakhan, he said, “SCLC would be out of business.” Steele said the organization was out of money and the lights were off. He called Chicago and visited Farrakhan, who “prayed for us. He blessed us,” and then wrote the SCLC a check. After that, the organization was able to raise $20 million, Steele said.

Tuskegee Mayor Johnny Ford, one of the caravan organizers, said Farrakhan “is the honorary mayor of Tuskegee for life.” Farrakhan spoke in Tuskegee in March.

When they were organizing the caravan at the SCLC offices, Ford said, the feeling was that “we cannot really have a movement until we reach out and invite Minister Farrakhan, who is the only black man in America who was able to bring 1 million black men” to Washington.

Among the introductory speakers in Birmingham were Rep. Mary Moore, who said the park should have been as full as it was in the 1960s, and Rep. John Rogers, who said that those opposing Section 5 were “going to turn the clock back on you.”

Noting recent budgetary controversies, Sheila Tyson said “They are attacking our school system, our health care. If you want to depopulate a race of people, take their education and health care, and they will soon die.”

Rev. Scott Douglas, who heads Greater Birmingham Ministries, urged the crowd to remember the civil rights martyrs killed in Mississippi in 1964, Andrew Goodman, Michael Schwerner and James Chaney, two of whom were Jewish, and mentioned that the only white clergy member to visit the Scottsboro Boys in prison was Rabbi Benjamin Goldstein of Montgomery.

Gregory Giles spoke on behalf of Birmingham Mayor William Bell, whose mother was in the emergency room. He stated the city supports Section 5, and said “for Minister Farrakhan to lend his name and credibility to this is very important to us.”

About 250 attended the Birmingham rally, and several hundred were in Montgomery.

In Selma, Farrakhan marched across the Edmund Pettus Bridge, site of the Bloody Sunday demonstrations in 1965. He was joined by Selma Mayor George Evans.