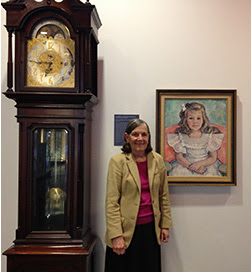 As a fifth-generation member of one of Huntsville’s first Jewish families, Margaret Anne Goldsmith had a great deal of collected history.

Now, much of that family history can be seen at the National Museum of American Jewish History in Philadelphia, where she donated a treasure trove of memorabilia and archival material, over 1000 items.

Claire Pingel, Chief Registrar and Associate Curator, said “this family’s Southern experience improves our holdings by providing a meaningful counterpoint to the more well-known stories of the Jewish communities of the big cities, especially those on the East Coast.”

Goldsmith said it was difficult to decide where to give her collection, “as not only the NMAJH and the Breman (Jewish Museum in Atlanta) wanted the collection, but there were also other interested parties in Mississippi and Alabama.”

While the Colonial Jewish and Eastern European immigrations were well represented in the museum, the German Jewish immigration to the South was not. “My family collection will fill an important gap at the museum which is why I decided to donate it there,” she said.

Goldsmith noted the collection “represents a classic story of German Jewish immigration to the South in the mid 1800’s. Our family’s experience was repeated in town after town throughout the South where Jewish families helped build those towns economically, civically, culturally and philanthropically.”

Though Jewish immigrants of that era were successful in assimilating, she noted with pride that “although we experienced a great deal of acculturation, all three of my children are Jewish, my son became religious and lives in Jerusalem.”

The Herstein, Bernstein, and Schiffman families arrived in Huntsville in the 1850s, and Oscar Goldsmith arrived shortly thereafter. In time, the four families were united by marriages.

A centerpiece of Goldsmith’s collection is a grandfather clock that Solomon and Bertha Schiffman purchased in Cincinnati between 1885 and 1894. Goldsmith thinks her great-great-grandfather Morris Bernstein, who had a watch and clock shop on the courthouse square, reassembled the clock when it arrived in Huntsville.

As with many of the artifacts, Goldsmith wrote a history of the clock and how it relates not only to the family, but to Huntsville history.

The clock followed the family through several homes until Lawrence Goldsmith built the Russel Erskine Hotel in the late 1920s. The clock was moved to the lobby of the hotel.

At one point, the clock stopped working. Among the Schiffman businesses was a Dodge dealership, and the head of the service department, Buck Sublett, loved to tinker with clocks. He could not get it to work, Goldsmith said.

Arriving at work early one morning, Sublett was attacked by a fellow employee who knew Sublett generally carried a lot of cash. Sublett died from his injuries and the robber received a life prison term. But the day Sublett died, the clock mysteriously started working again.

The hotel was in operation as the city grew from a small town to Rocket City, and the hotel housed the Federal site selection team that established what would become Redstone Arsenal. “I would imagine that the grandfather clock marked the events that literally ‘took us to the moon’,” Goldsmith said.

After the hotel closed in 1973 the clock returned to the family home, then became Goldsmith’s when her father died in 1995. It came “full circle” as she moved it to the I. Schiffman building on the courthouse square. The building where Tallulah Bankhead was born had been purchased by her great-grandfather in 1905.

On the museum’s blog, Rabbi Ruth Abusch-Magder wrote that Goldsmith’s donation of the clock “is a means of honoring the memory of her grandfather. With this action, she keeps his story alive and passes it on to future generations.”

The museum currently has pieces from Goldsmith’s collection on the first floor and in the core exhibition upstairs, with more to be installed in the coming months.

Pingel said the items now on display “are the tip of a wonderful Alabama iceberg” that is currently being catalogued.

While much of the family history went to Philadelphia, there were some items that she kept local. When she was growing up there were three portraits of black individuals on the wall of their home. When she was older, she found out they were painted by Maria Weeden, who painted portraits of freed slaves and lived near her great-great-grandparents. Two of the portraits were likely of slaves that had been in her family.

Weeden’s home is now a city museum. Goldsmith donated the three portraits to the Huntsville Museum of Art, doubling their collection of Weeden’s work. According to the museum, Weeden pieces are rarely available and the last one they found was in poor condition — but still cost them $10,000.

Goldsmith felt the Huntsville museum would be the better place for the three portraits, which are currently on display in the “recent acquisitions” exhibit through July 28.