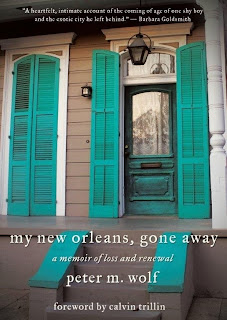 Peter Wolf, a sixth-generation Jewish New Orleanian, is returning home this month with a newly-published memoir about “loss and renewal.”

“My New Orleans, Gone Away” describes the New Orleans he knew and grew up in. Though part of a deep-rooted family in New Orleans, he grew up on the periphery of the Jewish community, something he discovered when he went north for school.

Wolf is a nationally recognized architectural historian, and authority in land planning, urban policy and asset management. He founded the Thomas Moran Trust, and his writings have been supported by the National Endowment for the Arts; the Ford Foundation; the American Federation of Arts: and a Fulbright Fellowship.

He will be in New Orleans for a launch event at Octavia Books on July 10 at 6 p.m., then at the Jefferson Parish Library on July 11 from 7 to 8:30 p.m. The book is scheduled for nationwide release on July 9.

He will return to the region in November, appearing at the Louisiana Festival of the Book in Baton Rouge on Nov. 2. New Orleans Hadassah will have an event and book signing on Nov. 4 at 6:30 p.m., and there will be an event in conjunction with the Yale Class of 1953 mini-reunion on Nov. 5.

The Hadassah event is of particular significance, because his aunt, Ida Weis Friend, was founder and first president of New Orleans Hadassah. Her father was the second president of Temple Sinai, and many relatives had been very involved in the “social side” of the Jewish community.

Though his ancestors were among the founders of Temple Sinai, he had very little Jewish exposure growing up. He and his parents lived far from the rest of the community, in the suburb of Metairie, where there were very few Jews — something that is difficult to imagine today.

“We weren’t part of New Orleans,” he said. “I didn’t know Jewish kids until I was 15, 16 years old.” He spent much more time in Pass Christian, Miss., at his paternal grandparents’ weekend home.

When he was enrolled for Confirmation at Temple Sinai — he was eventually asked to leave the class — it was only the second time he had been in the building. Not that the congregation was a bunch of strangers. He noted that every year his parents would put on a Christmas brunch that half the congregation, including Rabbi Julian Feibelman, would attend.

As the only Jew in Metairie Park Country Day School, he was class president and a tennis champion, but was soon sent north to Exeter, followed by Yale. It was at Yale that he developed three close friendships, including a Kansas City native named Bud, who would later be known as Calvin Trillin.

His Yale friends could not believe his lack of Jewish knowledge, and took it upon themselves to educate him. “It was illuminating, to say the least,” he said.

Being around students from other regions who were “more openly and joyously living Jewish lives” was a new experience for him.

When he brought fellow student Henry Geldzahler, who was from a Holocaust survivor family, home for the annual Christmas party, “he was completely stunned at the world he is introduced to.” Conversely, Wolf attended Seder with Geldzahler’s family. “This was an eye-opener for me, an education and transformative.” Not that he is “particularly observant” now, but he is “much more knowledgeable.”

In doing the book, he examined what was going on in New Orleans to make the part of the community he was in “so unwilling to be more expressive as Jews.”

He noted that it was shortly after World War II and the establishment of Israel. Segregation was still legal. He figures the feeling of being an outsider may have led to “really didn’t want to be very obvious as Jews. They weren’t denying that they were Jews, but it still seemed dangerous.”

Long before the storm, Wolf started writing short stories for his own “pleasure, after finishing a couple of other books that were long research projects.” He wanted to experiment with the short story form, using events in his life as the subjects.

After Katrina he looked at the collection of writings to see what they amounted to.

“I never intended to write a memoir, ever,” he said, but Christopher Lehmann-Haupt of the New York Times Book Review “saw the writings I was doing and said, ‘Peter this is a memoir, and I’d like to be your editor.’ I was so flattered and stunned.”

Scott Cowen, president of Tulane University, said the book is “beautifully written and descriptive of what it was like up to grow up Jewish in New Orleans in the mid-20th century.”

Writing an honest family account can obviously be tricky. “It’s inherent in the process of trying to write a faithful and honest piece of work that there will be some feelings that are upset,” he said, “but if you stick with the truth and tell the story in a plain way, things settle out all right.”

He noted that “a few family members have seen parts of it and were cautious about me saying some of the things I said, but in general are very appreciative that I’ve put it down and tried to make a coherent narrative.”

At times, it was a struggle for him to decide whether to stay in New Orleans, with all his family history, or move on to a different path. The book is about the questions “Do we leave home, can we leave home, what does it mean to leave home?”

He said the “vision and love of New Orleans has allowed me to be living in two worlds.”

The book closes in the late 1960s, but in an epilogue he discusses with relatives during a 2004 visit how the names Wolf, Godchaux and Weis have virtually disappeared as many more in recent generations have moved on to other places.

Then in March 2006 he and his family arrived in New Orleans for the first time since Katrina, to dedicate a pavilion in Audubon Park, a permanent reminder of those names and physical presence in a city that he left but never really left him.