Zimmern: All cultures want to share their food experiences 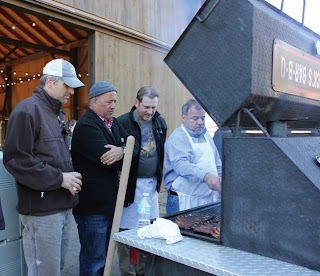 It’s a common story — Jews and food. So many jokes, so many stories.

But just ask a guy who grew up in that environment and then branched out to sample things nobody else would attempt to try — it isn’t unique to the Jews.

Andrew Zimmern, host of the Travel Channel’s “Bizarre Foods America,” said that all over the world, “people are falling over themselves to share their food and their culture.”

That’s because it is one love that everyone has in common. “At the end of the day, if we share a meal with each other, magical things happen,” he said.

As an example, he described being in Syria, about 20 miles from the Israeli border. Acknowledging his Jewish background, he said that it was “as close as I can find to someone who would not want to have anything to do with me” when he visited a family that makes goat milk cheeses.

Instead, he said, the hospitality was tremendous, with the husband saying “try this, try that.” He added that “the sense of pride people have in their food is massive.”

Zimmern was in Birmingham for several days in January to film an episode, “Birmingham: The New South” that will air on July 29 at 8 p.m. (Central).

In 2006, “Bizarre Foods” premiered, showing him traveling the world to find unusual and exotic local delicacies. “Bizarre Foods America,” which began in January 2012, is more of an ode to regional cuisine that might be unique to a particular state or city. For example, one item he sampled at Miss Myra’s BBQ in Birmingham was white barbecue sauce, a North Alabama specialty that is primarily used on chicken.

He said “Bizarre Foods” is a show “the whole family can watch and does watch,” since there is a lot of reality television that is not family-friendly.

And it has an unexpected benefit. In the grocery store, mothers come up to him and say things like “thanks to you, my kid eats Brussels sprouts.” He added, “If Andrew Zimmern will eat that fermented fish anus, you can eat your broccoli.”

Part of his reach with children was the publication of his book, “Andrew Zimmern’s Bizarre World Of Food: Brains, Bugs And Blood Sausage.” He also wrote “The Bizarre Truth: How I Walked Out the Door Mouth First… and Came Back Shaking My Head.”

He never thought that “I’d be the guy to eat giraffe beetles in Madagascar on TV,” but there is one place on the planet where “they know how to cook them, have been doing it for 1,000 years and do it right.” And he wants to be the person to try them, and do it where the art was perfected, not in some big city with someone doing a pale imitation.

By the way, he says they taste like shrimp.

It’s all a process of discovery. He does not want to be told about the next great restaurant, “I want to find it first.” He wants to be the first person to talk to that next superstar Japanese chef.

“There is great stuff happening everywhere,” he said, but there is “something special happening in the Southeastern U.S.,” which he described as “the most easily identifiable America.”

Louisiana, in particular, is “one of the places where everyone knows how to cook and the food is righteously good.”

In 2011, he educated the world about Southern Jews during a visit to Savannah that coincided with Sukkot. At an assisted-living facility next door to B’nai B’rith Jacob synagogue, he prepared kosher dishes with Chef Matt Cohen and sat in the sukkah with congregants.

In a sense, being in the Jewish South is a reconnecting with Zimmern’s roots. He said the Zimmerns were kosher butchers in Atlanta until the Civil War, and after the South lost they went to New York and started making furniture.

He credits his father with introducing him to the love of food and travel, but says his taste for the unusual comes from his grandmother. He would stay with her most weekends while growing up, and says she made a dish of sour tongue on red cabbage.

In the Jewish community, he said, “everyone thinks their grandmother made the best latkes or soup.” He started working from his grandmother’s recipes and “will put my matzoh ball soup up against anyone’s.”

When serving Jewish food, the audience matters. Non-Jewish guests, he said, think it’s great. The Jewish guest’s reaction? “Ehhh… Even if you love it, you can’t say” out of family loyalty.

The same goes with things like barbecue — everyone has their own idea about what is best.

After graduating from Vassar Zimmern worked at some top New York restaurants, but had an addiction to drugs and alcohol. It landed him homeless on the streets of New York for a year, stealing purses to feed his habit. In a Nightline interview he said addiction causes you to do things “that crater your soul.”

After an intervention, he received treatment in Minnesota and wound up as a dishwasher in a Minneapolis restaurant, Café Un Deux Trois. One day he replaced a line cook who was sick, and in less than two months was executive chef.

He quickly became a fixture on local television and wrote for magazines, developing a national and international reputation. In 2010 he won the James Beard Award for Outstanding TV Food Personality.

While traveling the world, he maintains his home base in Minneapolis, with his wife Rishia and son Noah. He also has a food truck that travels the country, AZ Canteen.

While Zimmern has been all over the world, there are three places he really wants to visit but has not been to yet — Ireland, Poland and Israel. They have been on the board since the first season but haven’t come to pass.

“I’m dying to get to Israel,” he said. Ironically, he said, whenever he goes to New Orleans, “John Besh is always in Israel.”

Besh was one of four New Orleans chefs that went to Rosh Ha’Ayin, the New Orleans Partnership 2Gether community in Israel, on a culinary exchange in the summer of 2011. Zimmern said experiences like that are a “game changer for people — both ways. Those chefs will never think the same.”

Last summer, Zimmern called out another Minneapolis chef who posted a map of the Middle East that didn’t include Israel, initiating a dialogue on his blog.

Zimmern was supposed to visit Ireland and was on his way in 2010, but a volcano eruption in Iceland that closed down much of Europe for a week prevented the trip.

A few weeks after his Birmingham visit, he was in Saint Louis to film, and was asked about a favorite city to visit. After mentioning three or four he said “I love Birmingham,” but admitted he’s a “bright-shiny-objects guy” that falls in love with places where he has just been.

Of course, he visited the granddaddy of Birmingham meat-and-threes, Niki’s West, where he sampled the succotash and stewed tomatoes.

He also visited a lesser-known family-run place nearby, Eagle’s, where “the neck bones are ridiculous” and he declared them the best he’d ever had. They were accompanied by oxtails and collard greens.

The Eagle’s owner gave Zimmern a demonstration of his technique for carving neck bones on an electric saw.

He sampled braised goat on couscous at the Shindigs food truck, bean pie from Z’s restaurant downtown, dined at Red Pearl Restaurant and Super Oriental Market, and spent a lot of time with the team at Jim ‘N Nick’s BBQ.

He also visited George Sarris at The Fish Market on Southside and had a pigskin noodle bowl at Hot and Hot Fish Club, home of James Beard Award winner Chris Hastings.

He also visited the University of Alabama at Birmingham to see a pilot program for sustainable sea urchin. “This stuff is incredible,” he said. “Game changer.”

The week ended with a farm shoot with Nick Pihakis and John Michael Bodnar of Jim ‘N Nicks, and friends from Cochon in New Orleans.

As Pihakis tended several types of barbecue and some additional items from Cochon, such as boudin, Zimmern filmed segments on Jim ‘N Nicks’ sustainability efforts and the making of some Cochon classics with Executive Chef Donald Link.