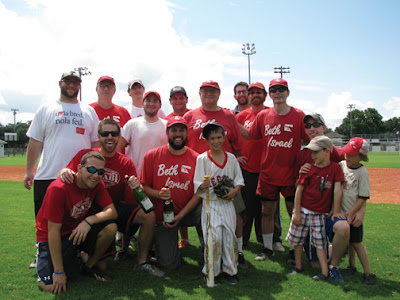 Starting slow but finishing strong was a trend for BIASCHA, but it worked as the fourth-seeded team won the New Orleans Synagogue Softball League championship.

The combined efforts of Beth Israel, Anshe Sfard and Chabad took the title in a come-from-behind 11-7 win over Beth Israel neighbor Gates of Prayer in front of a record crowd on July 14 at Girard Playground in Metairie.

Beth Israel and Gates of Prayer had hosted a forum on local Jewish sports personalities the previous Wednesday, at which time there was some back-and-forth in anticipation of the championship game.

BIASCHA took an early lead with a run in the top of the 1st inning, courtesy of a fielder’s choice RBI by Austin Kirzner.

In the bottom of the 3rd, Gates scored two unearned runs to take the lead. Gates added to its lead in the bottom of the 4th on a Chris Williams double, a Jeremy Jacobson RBI single, and a Jared Davidson sacrifice fly, resulting in two runs and a 4-1 Gates lead.

Gates cut the lead to 8-5 in the bottom of the inning with a Chris Williams RBI. In the top of the 7th, BIASCHA continued the onslaught with three insurance runs, on a Dylan Laventhal 2-RBI double and a Napoli RBI single. Despite the 11-5 challenge, Gates tried to come back, with Michael Finkelstein Max Michaels each driving in a run, but the rally fell short.

BIASCHA scored 11 runs on 17 hits and had two errors, while Gates scored seven runs on seven hits and four errors.

In the semifinal on June 30, BIASCHA took out top seed Shir Chadash, which had the best regular season record at 8-1-1. Again, BIASCHA had to come from behind, spotting Shir Chadash a 3-0 lead. In that game, Austin Kirzner had an over-the-fence home run.

For Shir Chadash, it was a bitter end to their season with a mission, having been on the losing end of a controversial finish to the 2012 championship game.

The 2012 champion, Touro Synagogue, was pounded by Gates of Prayer in their semifinal, 21-6. During the regular season, Touro had won both games against Gates, 5-0 and 9-5. In the semifinal, Designated Hitter Seth Shear set an SSL record with three over-the-fence home runs, driving in five runs.

Missing the playoffs this year were Temple Sinai, the combined Baton Rouge team of B’nai Israel and Beth Shalom, and Northshore Jewish Congregation.

Sinai had a 5-5 record, losing some very close games this season, but the season was highlighted by two upset wins over Touro, 12-7 and 11-6.

The Baton Rouge team, playing in its third SSL season, had a 3-7 record, highlighted by a 10-8 upset win over eventual champion BIASCHA in the last week of the regular season. Northshore had a 1-9 record, primarily the result of having to play a significant number of games short-handed. Theseason highlight came on opening day with its sole victory, 7-6 over Sinai.

The seven teams represent 10 Jewish congregations in New Orleans, Metairie, the Northshore, and Baton Rouge, with a total of 140 participants, including one female. The season runs from March through July with all games being played in Metairie at Girard and Miley Playgrounds on Sunday mornings.

The 2014 season will commence in early March. There is a discussion that Shir Chadash might field two teams next year, one to go for the title and one to develop younger talent. Gates of Prayer used this model following its 1994 championship.