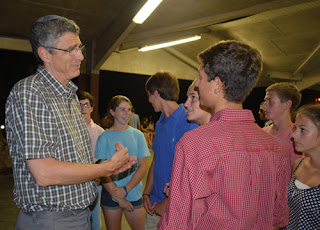 Along a stretch of road from Memphis to Utica, Rabbi Rick Jacobs saw a wide range of congregations and communities as he toured the Deep South for three days.

Jacobs, president of the Union for Reform Judaism, undertook the three-day tour to become more familiar with the Deep South and its unique issues. He visited Reform congregations in Memphis, Greenville and Jackson, and made the first visit by a URJ president to the Henry S. Jacobs Camp since 1989.

In Memphis, he saw “one of our largest and certainly most active congregations,” Temple Israel, for Shabbat services on July 19. The next morning he traveled to Hebrew Union Congregation in Greenville for morning services and a lunch discussion that included members of the interfaith clergy association.

“There you have one of our smaller congregations in a beautiful jewel of a building with a wonderful history,” he said. Making the morning even more special, he said, was that they had a baby naming during the service, which is rare for the small community.

A lot of the congregations in the Deep South are charter members of the URJ, dating back to 1873.

They were “forces for Jewish engagement and leadership,” he said. During his trip, he saw “the incredible devotion of Reform Jews in the South, some of whom have been in the congregations for generations.”

But “their struggle is, where are the new members going to come from,” he noted.

“You don’t want to be only about the past, you want to be about the present and the future,” but these congregations have to deal with the reality of a dwindling pool of possible members. He said such communities have to be “very creative in how they engage every person who is remotely interested.”

Leaders from Anshe Chesed in Vicksburg drove to Greenville for his presentation and told him that they have 100 percent attendance at their Shabbat services — but that still is a very small number. “Everyone in the very small (congregations) knows that their participation is critical” and that has made them stronger and more creative leaders.

After Greenville, he went to Beth Israel in Jackson, a“wonderful mid-sized congregation” for an afternoon discussion. There, he encountered members that routinely travel as much as an hour to attend services.

From there he headed to Utica for Havdalah at Jacobs Camp, and then observed the camp in action that night and the next day.

He noted that Jacobs Camp has a unique role among the Reform camps. It “serves the Southern Jewish community in ways that are quite inspiring,” because the campers often are from tiny communities where they have no idea what it means to be in a large group of Jewish kids. “When they come to Jacobs Camp they’re in this large, proud Jewish community.”

At other camps, the students come from larger communities where it isn’t unusual to be able to sit in a circle with 30 other Jewish kids. For many Jacobs campers, such a notion is impossible in their home towns.

He told the counselors that they were “keeping Judaism alive in a most beautiful and compelling way.”

“Rabbi Jacobs had no problem endearing himself to the Jacobs Camp Family,” noted Camp Director Jonathan “J.C.” Cohen. “As soon as folks in camp met him, they knew Rabbi Jacobs had something special to share.”

Discussions touched on the evolution of the Reform movement, youth engagement, interfaith families, small congregation concerns, outreach to young adults and Jewish life outside the synagogue.

Memphis is very creative and savvy on what they need to do to attract young members. “They don’t assume the next generation is just going to knock on the door of the synagogue and say ‘can we come be a part of what you do’,” but they also have a larger pool to draw from.

You can do your best practices in Greenville, but there aren’t that many people you can potentially contact and engage, he noted. “But I can be sure that nobody would walk into the congregation in Greenville that wouldn’t feel a warm welcome and embrace.”

On July 21 he met with lay leaders from across the region, including Baton Rouge, New Orleans, Little Rock and Alabama. He noted that the rabbis from those areas serve as faculty at the camp, and many of the lay leaders in attendance are also on the camp committee.

Jacobs said “there is a very compelling need for a movement, so we can grow and strengthen in effectiveness.” He added that “catalyzing congregational change requires that we all tell the truth about our successes and our problems.”

He said it was not an accident that he was visiting Mississippi. He found that “it’s not the same as the Chicago community, it is its own very distinctive community” with its own level of passion and commitment.

Driving through the region, “You see cotton fields and civil war battlefields, small and large congregations and a lot of very devoted leaders in our Jewish communities.”

And of course, he saw one other important thing. “Southern hospitality was genuine and noticeable.”

Jacobs led the Westchester Reform Temple in Scarsdale, N.Y., for 20 years. He has also been on the ground assessing needs in Haiti after the 2010 earthquake and in Darfur in 2005. In 2009, he was part of a conference in Qatar to build understanding between the West and the Muslim world.