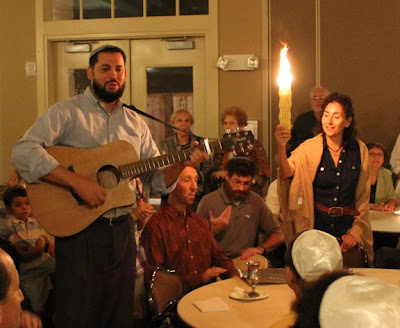 (Editor’s Note: Updated Sept. 3 with comments by the author of the original JTA piece).

Rabbi Uri Topolosky said he is “pained” by how an Aug. 26 JTA piece about his departure from New Orleans portrayed him and portrayed a community he and his family love.

“I’m very disappointed, obviously, in the article and the angle the author took,” Topolosky said. “People think I’ve betrayed a community that has been very good to me.”

Topolosky left Metairie’s Beth Israel at the end of July after six years in New Orleans. Online reaction to the article has ranged from those who say he “burned his bridges” to New Orleans in the piece, to others who are giving him “the benefit of the doubt.”

The piece centers around how he and his family made the difficult decision to move because of the educational situation for their four children, ages 2 to 9. He also had an opportunity to take a new position in the community where he grew up.

In an open letter sent for distribution to the community on Aug. 29, Topolosky said the piece mischaracterized their departure. “In no way did I ever insinuate that our move was the result of an overall decline in the state of the NOLA Jewish community (Certainly, the word ‘crumbling’ never came out of my mouth!).”

Heilman said Topolosky did not use the term “crumbling,” nor was it attributed to him, but it was the headline that JTA used in distributing the story to client newspapers. Many of the things that have caused a negative reaction are not in the actual story, Heilman said, but in what people are saying about the story.

When contacted by JTA, Topolosky figured the piece would be about his new position, “a story in and of itself,” and how it was a homecoming for him, but said when he was asked about the reasons for his departure, he felt immediately on the defensive and felt Heilman was “looking to undermine the history of the last six years.”

Heilman characterized the interview as “amiable,” that he wasn’t looking to undermine anything and was interested in hearing Topolosky’s perspective.

Over the last six years, the New Orleans Jewish community has rebuilt itself from the entire community having to leave the city, to a post-Katrina low of 6500 Jews, to today’s community that approaches 10,000. Before the storm, the community numbered 9500 and was considered to be on the decline. Today, New Orleans is attracting young professionals and retaining many Jewish graduates from Tulane, with the Jewish Federation of Greater New Orleans running a vigorous newcomers program.

Heilman notes the new Beth Israel building and eruv, but quotes Topolosky as saying that New Orleans would never be “a haven for Orthodox Judaism.”

Topolosky said he was trying to tell Heilman about the joys and benefits of living in a small community. He was admitting that New Orleans was not going to be a Chicago, a New York or a Baltimore, but Heilman took that phrase and “spun those words into a much more negative tone.”

Topolosky said he found himself “trying to defend small Jewish communities in America.”

In his letter to the community, Topolosky explained that in some parts of the religious Jewish world, a community is measured by only one or two things. “That might be because they have never spent a good weekend in some of the special places where Jews have gathered outside the giant metropolises of our country.” By the narrow measuring stick in huge communities, New Orleans isn’t an Orthodox haven, “but I also said it is the exact type of Orthodoxy we have loved for the past six years. And it is the kind of Jewish community that broke our hearts to leave.”

Heilman said he asked Topolosky to talk about the value of small Orthodox communities, and the “haven” remark came when they were discussing only New Orleans.

The congregations on the Jewish Corridor in Metairie — Orthodox Beth Israel, Conservative Shir Chadash and Reform Gates of Prayer — still have a wide range of joint programming, and Topolosky routinely studied with the other congregations’ rabbis.

The decision to leave came down to what was best for the family in the long run, and from the beginning Topolosky was open to the congregation about educational opportunities for their children being the key component. When he informed Beth Israel’s board about his decision last December, he said it “is with a broken heart” that they were leaving because they love New Orleans.

On Aug. 29, Beth Israel leaders released a statement of support for Topolosky, stating that none of them had been contacted for the article, and the congregation “completely disagrees with the author’s opinions and implications.” They said their relationship with Topolosky is “positive and respectful” and they “will forever be grateful for his contribution to the growth of Beth Israel, Orthodox Jewry in New Orleans, and the entire New Orleans Jewish community.”

The article mentioned the community’s other non-Chabad Orthodox congregation in passing, stating just that it was even smaller than 150-family Beth Israel.

Anshe Sfard Rabbi David Polsky said he was not contacted by the writer. But the congregation, the last remnant of the old Orthodox neighborhood of decades past, has struggled for many years. Before Katrina, the local Chabad was in charge of it. Polsky came aboard in 2011 as the first full-time rabbi there in decades and has raised the congregation’s profile.

“We have been gaining new congregants, especially recently,” he said. Last Shabbat, despite many regulars being away and it being summer, they had about 20 for services. The congregation also routinely caters to observant tourists visiting New Orleans, with large numbers visiting during the Super Bowl earlier this year.

The piece also noted in one sentence the presence of three Chabad Centers and plans to open a Chabad-run school in the fall of 2014. Torah Academy, which has been closed since Katrina, will reopen then. Topolosky noted he mentioned all that to Heilman, since Chabad “is a very important part of the community.”

When Peacebaker bakery was certified kosher in July, it was done by Polsky and one of the Chabad rabbis, Yossi Nemes.

Sharon Pollin, who became head of the Community Day School in July, said the school “embraces strong Jewish education and values the gumbo of its pluralistic population.”

A year ago, New Orleans Jewish Day School announced that it was changing its name to Community Day School in an effort to broaden its enrollment and attract more unaffiliated, intermarried and non-Jewish students. A decline in enrollment at non-Orthodox Jewish schools has been seen nationally.

She said many factors have led to Jewish schools struggling, including the recession from 2008, charter schools and “exciting developments in supplemental religious education.” Because each community is different, “there is no one-size-fits-all solution for Jewish day schools.”

Pollin said “What this day school is doing is embracing this opportunity to be inclusive and welcoming of all students, to innovate our curriculum, and to grow in a proactive manner that represents the needs of our community while maintaining the roux of our Jewish traditions. We choose the gumbo.”

Topolosky stated that “many communities, large and small, share the struggles of maintaining a Day School” and such normal struggles “should not be waved as a red flag to undermine all the good work that has been done.”

In an online post, Rabbi Yochanan Rivkin of Chabad at Tulane stated “when talking to the press, something that is said in one vein can often be interpreted the wrong way, and I am sure that this is what happened here.”

In his online defense of New Orleans, Rivkin stated that “small community Jewish life isn’t for everyone, but it can certainly be made to work.”

He added, “We have a unique flavor that I would not trade for any other flavor in the world. In my opinion, for the right kind of family, we are, and we will be, a haven for Orthodox Judaism, and Judaism in general, until Moshiach comes.”

Topolosky said the article “was personally damaging, but even more hurtful to see our New Orleans smeared in this way. There wasn’t an effort to understand and appreciate our community.”