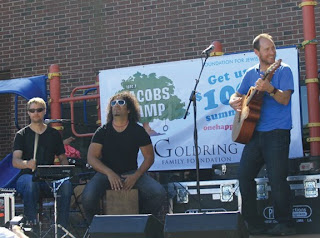 Two years ago, Dan Nichols and his band E18hteen did a Sukkot tour of the South, visiting communities large and small, some of which have rarely if ever been able to put on a program with a big-name performer of Jewish music.

In October, the documentary film from the “Road to Eden” tour will have its Deep South premiere as part of the Henry S. Jacobs Camp Fall Family Fest.

From Oct. 11 to 13, families in the region can experience a camp-style weekend, or choose to attend only the Saturday night “Dinner and a Movie” premiere.

Fall Family Fest includes a Shabbat experience, Havdalah and an opportunity to socialize with families from across the region. It is for those who already have ties to Jacobs Camp or first-timers interested in experiencing camp.

There will be structured programming for children and adults, and family time on the camp’s climbing tower, in the lake, and opportunities for sports, art and more.

Adults and young children will be housed in double-occupancy rooms. Children age 6 and older will stay in camper cabins with counselors.

“Dinner and a Movie” will be on Oct. 12 at 6 p.m. It starts with a dinner that includes the camp’s famous fried chicken, then is followed by Havdalah, the film, a conversation with the movie’s director. The evening wraps up with an acoustic concert by Nichols.

It was on Oct. 12, 2011 that Nichols and crew began a 2600-mile trek through the South over Sukkot, in the temporary dwelling of an RV. They went from community to community, building sukkot by where the RV was parked. Stops included Pensacola, Montgomery, Dothan, Jackson, Birmingham, New Orleans and Baton Rouge as part of the 10-day trip.

In Montgomery, he performed with the Tribe of Judah Gospel Choir at Temple Beth Or.

The film will premiere in Scottsdale, Ariz., and St. Louis during Sukkot. There is also a tentative plan for a concert and screening in Dothan on Oct. 13.

The film touches on a wide range of topics that came up during the tour, in the framework of the meaning of Sukkot. Immigration reform in Alabama, the importance of Jewish summer camp and civil rights struggles were viewed through that lens. The film’s message is to build “an ever-expanding Sukkah” to rebuild the world.

Nichols said, “For me, camp saved my life,” and he concluded the tour at his original camp, Goldman Union in Indiana.

Cost for the entire Jacobs Camp weekend is $150 per person, ages 3 and up. The charge for those attending only Dinner and a Movie is $36.

Deadline for the weekend is Oct. 1 or earlier if the camp fills. Deadline for the Saturday night program is Oct. 4. Registration forms are available at the Jacobs Camp website.