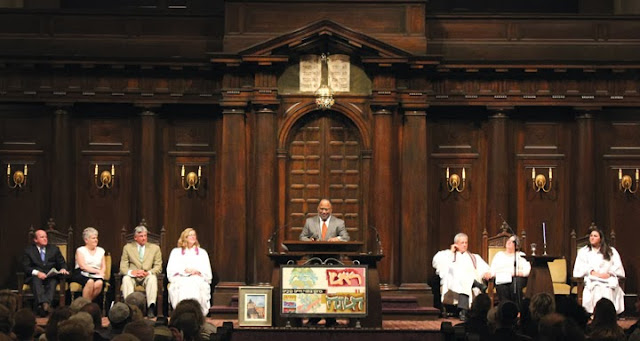 At Birmingham’s Temple Emanu-El, the phrase “My house shall be a house of prayer for all people” is written into the building. At the Aug. 24 Selichot services ushering in the High Holy Days season, it was evident that was no mere platitude.

To cap off a year of celebrating the 100th anniversary of the congregation’s sanctuary, representatives of five churches took part in the service. Four of the churches have been housed in Emanu-El’s sanctuary, while the other opened its doors a decade ago as Emanu-El underwent extensive renovations. Soloists and choirs from the churches were interspersed with the traditional Selichot liturgy.

In his introduction, Emanu-El Rabbi Jonathan Miller said “I don’t think there has been a building that has done more for Christian life than these walls. We have spawned and built up (at least) six churches… and we are very proud of it.”

The first, Central Presbyterian, met at Emanu-El’s previous building on the Northside for a year in 1890, and in 1900 First Baptist Church met there while constructing their building. According to recollections of Rabbi Mayer Newfield, who served the congregation from 1895 to 1940, the Congregational and Universalist churches also routinely met at Emanu-El.

The first church to meet at the current Emanu-El building was South Highland Presbyterian Church, which is located diagonally across the street. They spent two weeks at Emanu-El in June 1914 while their church was being renovated, mere months after Emanu-El moved in.

South Highland Presbyterian Rev. Ed Hurley added that the following year, Independent Presbyterian Church was formed and got its start at Emanu-El. He jokingly attributed the church’s split to a desire by roughly half of Southside Presbyterian’s members to meet at Emanu-El “on a more regular basis.”

Hurley said the churches and synagogues on Southside “were built to last” and “to make a statement, to offer a visible presence other than the businesses and restaurants.”

A favorite painting in his office shows his church in the foreground with Emanu-El in the background. He said it is “a beautiful parable of what we represent as faith communities.

“The dome and the steeple have borne witness together” for a century.

He recalled how Emanu-El welcomed delegates to the Presbyterian Church USA’s national assembly in Birmingham in 2006 for Shabbat services, when a contentious resolution on divesting from companies doing business with Israel was on the church’s agenda.

He also recalls being at Emanu-El for Shabbat services with Miller and Southside Baptist Church’s Rev. Steve Jones when Mel Gibson’s controversial movie, “Passion of the Christ” came out, when they were asked not only to react to the film, but to speak on their understanding of those events 2,000 years ago. “You invited, and you heard with love and respect, the preaching of the cross,” Hurley said. “And we heard a reminder of the shameful persecution of Jews by Christians in the Middle Ages during Holy Week.”

Independent Presbyterian’s Rev. Susan Clayton said that in 1915, when Rev. Henry Edmonds felt he had to resign at South Highlands, many members urged him to form a new church. Rabbi Newfield encouraged him to stay in Birmingham and offered Emanu-El’s sanctuary as a temporary home.

Due to World War I, the arrangement lasted seven years. “There was not one ripple of disagreement or uncertainty” for the entire time. They made an arrangement that was a “song without a discord.”

“Our church was born within these walls,” she said, and they moved into their permanent home in 1922 — with a gift of two seven-branched menorahs that “continue to hold a place of honor in our church.”

Then tragedy struck in April 1992, as Independent Presbyterian caught fire. Clayton said Rabbi Miller, Rabbi Emeritus Milton Grafman and Emanu-El’s president came to the parking lot to be with them as the fire raged, and they told Rev. Scott McClure to “come home” to Emanu-El. The offer was accepted, but they had one more service that night in the parking lot “across from the charred remains,” with Rabbi Grafman in attendance. Grafman had served at Emanu-El from 1941 to 1975.

“I know that it was here in our first home, through your gift of grace, hospitality, friendship, respect and love that we learned some of our greatest lessons of faithfulness,” Clayton concluded.

Rev. Tim Kelley represented Southside Baptist Church, as Rev. Jones was recovering from a stroke. In 2001, Emanu-El began 14 months “in the wilderness,” housed at Southside Baptist while Emanu-El’s building was renovated.

For Emanu-El, it was a return visit. In 1913, their building was not ready for the High Holy Days, and the old building had already been rented to a relatively new congregation, Beth-El. Emanu-El accepted an invitation to hold their High Holy Day services at Southside Baptist.

Kelley noted that as Emanu-El members marched the Torahs down Highland Avenue to their temporary home, “there was a lot of anxiety and fear by both the congregations,” and Miller probably wondered if Emanu-El members would follow him through the doors of a Baptist church.

“But you did, and for that we are thankful, for you taught us a lot in that experience,” he said.

Miller noted that Emanu-El had looked at South Highlands and Independent Presbyterian, but both had huge crosses as part of their sanctuary décor, and he felt “this is probably going to be difficult for the parents of the Bar Mitzvah kids” to accept.

Southside had just one small cross high in the room, and it was covered when Emanu-El was there because, Kelley explained, “the cross had been for so long a sign of hurt and pain” for Jews.

But when it came time for Emanu-El’s final service at Southside before returning home, Miller left the cross uncovered, “a visible symbol of the understanding we had all come to,” Kelley said. “We were friends and family and we worship the same God, and there is more we could do in union together without the suspicion, without the fear, that would bring a vitality and strength to our community that could never be achieved otherwise.”

Miller said when they arrived at Southside Baptist for the first time and saw the new, large banner welcoming them to a house of prayer for all people, “it was one of the most powerful moments of interfaith work that I have ever experienced.”

Rev. Sarah Shelton of Baptist Church of the Covenant spoke of her church’s origins at Emanu-El after “all hell broke loose at First Baptist Church in June 1970” when a black family applied for membership and were denied three times.

At the third refusal, Pastor J. Herbert Gilmore submitted his resignation and surgeon Byrn Williamson urged those who had a moral problem with the refusal to follow him out of the church, and over 250 followed.

They established Baptist Church of the Covenant, which started meeting at Emanu-El in February 1971 and stayed for three years until they found a permanent home.

After that, a resolution supporting racial inclusiveness in all Birmingham houses of worship quickly passed unanimously.

Shelton noted that she is sometimes asked how Covenant “can afford to be hospitable to so many different types of people in our congregation. My answer is that we learned about hospitality from those who do it best: our Jewish neighbors at Temple Emanu-El.”

Rev. A.B. Sutton spoke of Emanu-El’s legacy of “faithful love.” He saw it in 2010 when he had “a theological controversy of my own” at Sixth Avenue Baptist Church. While visiting Tibet, he heard God telling him it was time to leave the place where he was serving.

When he returned home, he heard the voice again, and replied “God, if this is you talking and not me, then I need a place to go.

“And I heard God say, call Rabbi Miller. Desiring to be obedient, I did.”

They had lunch, and Sutton told Miller what had transpired. Miller told him to come to the synagogue. “It had never crossed my mind. It was the farthest thing from my expectation that I could possibly be at the synagogue in any capacity.”

He resigned from Sixth Avenue the last Sunday of October 2010. The next Sunday, Living Stones Temple had its first service at Emanu-El with 800 in attendance, and within a year was able to pay cash for a building.

Sutton explained, “We call ourselves Living Stones Temple, so we don’t ever forget where we came from. So we know what love looks like and what hospitality feels like. Because of Temple Emanu-El.”

The choir from Living Stones then brought down the house with a rendition of “Pulling Me Through.”

At the end of the two-hour service, Miller remarked that “I have never had a worship experience where I have felt so uplifted,” and invited everyone back for the bicentennial.