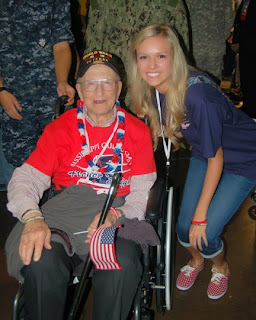 In recent years there have been dozens of Honor Flights from across the country, bringing World War II veterans to Washington to view the National World War II Memorial.

The one that Jackson’s Lou Shornick was on this week got a lot more media coverage than most others.

On Oct. 1 a group of over 90 veterans and roughly 60 caregiver-companions took off from Gulfport, knowing that the U.S. government had gone into shutdown mode a few hours earlier. When they arrived at the memorial, the central spot on their agenda, there were barricades and police line blocking off access to what is usually an open-air site.

A request to allow the veterans to visit the memorial had been made to the White House, but it was denied.

“At first we sat on the bus,” Shornick said, then the group got off to look over the fence.

As is typical, Congressional representatives were on hand to greet the veterans. “One of them had a pair of scissors,” Shornick noted, and because the lead guard was a former Marine, “he wasn’t going to stop us from going in.”

U.S. Rep. Steve Palazzo of Mississippi invoked the line of being “better to ask forgiveness than to ask permission.”

A bagpipe player was the first one in, leading the veterans to the Mississippi section, where they laid a wreath. As they left, an Honor Flight from Iowa arrived, one of 10 scheduled for the week.

“The next day, they had more guards there,” Shornick said. “They really don’t want us to be there. They want to inflict the most harm, to try to get the Republicans to see it their way.”

Democrats say the barriers are necessary to protect memorials that are not being patrolled.

Photos and video of the encounter quickly hit the Internet, and Shornick said they knew while they were still in Washington that their visit was plastered all over the news.

They also went to Arlington Cemetery, witnessing the changing of the guard and a wreath-laying at the Tomb of the Unknowns. Some additional sites were added to the trip as the schedule was affected by the shutdown.

But for Shornick, the highlight of the trip was returning to the airport in Gulfport, where a crowd was waiting. He said the whole length of the terminal was filled with people, five deep on each side. “I’ve never had anything like that before,” he said. One at a time, the veterans made their way into the terminal where they were surrounded by well-wishers giving a “rock star” treatment of handshakes, hugs and kisses, with each of them being treated “like we were the only one there.” At the end of the terminal was a procession under crossed swords.

On the way back, they also had a “mail call,” with notes from well-wishers and students. “Most got one package but I got two, containing more than 200 well-written stories for me,” he said.

A Connecticut native, Shornick worked with civilians at Wright Air Force Base in Ohio as an aeronautical engineer working on a new material that had never been used before — silicone. In 1944 he applied to the Navy and started in communications. He switched to aviation, became an officer and worked as a rocket scientist at the Bureau of Aeronautics in Washington.

In 1950 he took over a woodworking plant in Canton, Miss., then moved to the Magnolia State in 1953. After 13 years, his plant was acquired by Shelby Williams Industries. When that firm was acquired seven years later, he decided not to be “a small fish in a big pond” and retired at age 55.

He has devoted himself to travel and pursuing his life-long passion of photography. He also remains active at Beth Israel in Jackson, where he was president in the mid-1960s when the current building was erected.

During the flight, he was accompanied by 17-year-old Sarah Jenne (pictured above), who was one of four Gulf Coast students selected to be on the flight following an essay contest. When they met, he was the one to pull out an iPhone and ask her to friend him on Facebook.

Aside from the original meeting, she visited him in Jackson and is “anxious” to come visit again. This was her first trip to Washington.

Shornick noted that when they returned, he got to meet her whole family at the airport.