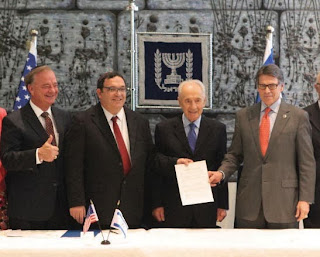 On Oct. 23, Texas A&M announced plans to build a campus in Nazareth, the first United States university to open a branch campus in Israel.

The Texas A&M Peace University would offer advanced degrees and emphasize attracting Jewish, Muslim and Christian students and faculty in what is Israel’s largest Arab city.

The announcement was made during a ceremony between Texas Governor Rick Perry and Israeli President Shimon Peres at Peres’ home.

“Texas A&M and Israel make a good fit, as communities built upon the values of family, commitment and tradition. That’s reflected in the goals we’ve established for this university,” Gov. Perry said. “We want to see the Nazareth branch as a means to preserve peace and build understanding between cultures.”

Israel’s Education Minister Shai Piron said it was a day to celebrate. “Our joy is even greater, knowing that we are establishing a campus of peace located in the city of Nazareth, in the Galilee. The founding of such a renowned institution in an Arab city in the State of Israel sends an important message to Israeli society and the Arab public in Israel. I am certain that this splendid institution will have the power to enhance the vision of peace and equality, and the founding of this institution is a giant step in that direction.”

John Sharp, chancellor of the Texas A&M University System, said the idea started with Perry. He told the Times of Israel that he and Perry are both “huge supporters” of Israel. “We didn’t know exactly what the vision would be, but it became clearer when we started dealing with Shai Piron and Shimon Peres, who wanted it to be not just a university, but a peace university, and that’s how it morphed into the agreement that we have now.”

The university will raise about $70 million from private donors to build the campus, and the opening is anticipated in fall 2015. The fundraising has to be completed before construction begins; last year the Texas A&M system raised $760 million overall.

The Knesset will also have to approve the arrangement, as branch campuses of foreign institutions have previously not been permitted in Israel.

This is the second Middle East campus for Texas A&M. An engineering school in Doha, Qatar, has 550 students from 30 countries.

The Nazareth campus will include the takeover of the financially-troubled Nazareth Academic Institute, which was formed three years ago.

Pastor John Hagee, founder of the million-member Christians United for Israel, made the connection between the university and Israeli officials at Sharp’s request. Hagee has a church in San Antonio.