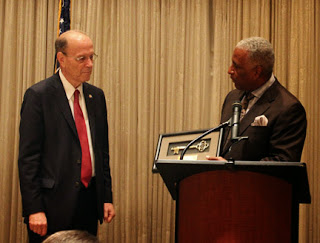 At the second annual JH Israel and U.S.-Israel Education Association Foundation dinner, founder Heather Johnston said “we have so much to celebrate.”

Ambassador Yoram Ettinger, the dinner’s speaker, spoke about the organization’s efforts on behalf of Israel, and gave an update on the current situation in the Middle East.

The Oct. 9 event at The Club in Birmingham drew about 500 in support of the local group’s efforts in Ariel. While the gathering was mostly non-Jewish, there was a larger representation from the Jewish community, through the efforts of Joel Rotenstreich and from an increased awareness of JH Israel in the community.

JH Israel is an outgrowth of JH Ranch, a California Christian-based outdoor leadership development center run by Heather and Bruce Johnston of Birmingham.

In 2010, the organization opened the Ariel National Leadership Development Center, working with the city of Ariel and the Israel Ministry of Education to develop a leadership development curriculum for Israeli youth.

Heather Johnston met Ariel Mayor Ron Nachman in Jerusalem in 1997, leading to a friendship and support for the city, located in the heart of the West Bank.

During her first visit to Ariel, she was overwhelmed by a visit to the absorption center for Jews from the former Soviet Union, having just read verses in Jeremiah that spoke of such a wave.

They got involved “in practical ways,” funding a radio station, computers for the schools. Many Ariel teens started going on a cultural exchange program to JH Ranch.

Soon, JH Ranch teens went to Ariel “where they got to experience Shabbat, Chanukah and see the roots of their faith.”

In 2006, the Johnstons suggested building a similar facility for Israeli youth in Ariel, which Nachman thought was a bad idea. A few months later he visited their program in California, “climbed on ropes courses for a week” and in July — “on 7/7/07,” she noted, they signed an agreement to build the center in Ariel.

On 8/8/08 representatives from the Ministry of Education visited the California ranch to sign an agreement to develop the curriculum, and on 9/9/09 permits to build were issued, despite a freeze on all new construction in the territories.

Christa Lidikay of JH Israel said the curriculum “reflects on leadership and the Biblical and cultural heritage of leaders in the Tanach.”

This year, they expect about 25,000 to go through the center, from school groups to Israel Defense Forces groups to governmental delegations. The center is also “a reason for people to travel into Samaria and see it.”

Seeing the city in the heart of what is called the West Bank was also a motivation for the establishment of the educational association. Nachman told the Johnstons that in all his years since founding the city, only one congressman had ever visited what is referred to as the capital of Samaria.

Back in the states, Heather Johnston met with Rep. Eric Cantor, who coordinates AIPAC educational trips to Israel for new congressional representatives, and suggested that her group would create “a complement” to the AIPAC trips. These would be for veteran lawmakers, especially those heading committees that affect Israel, and would be for just a handful at a time.

The first trip took place in 2009. Johnston said many of them had been to Israel numerous times but had never gone into the territories.

The latest trip is slated for Nov. 1 to 10 with seven representatives. A representative from a previous trip was so impressed with a site visit to the Iron Dome defense system that upon his return he spearheaded the drive to triple funding for it.

On those trips, Ettinger said, Johnston has formed unique itineraries, pairing the representatives with industries found in their districts, or having to do with committees they serve on.

Rep. John Fleming of Louisiana was on the fall 2011 trip.

Ettinger noted the AIPAC visits “focus on political and defense meetings — which are very important.” The AIEA trips expose the visitors to Judea and Samaria, “which is extremely important irrespective of the world-view of the visitor” in terms of whether Israel should give over the territories to the Palestinians.

“You may be a person preferring total Israeli withdrawal (from the territories), but you should know what it is that you want Israel to concede.”

He said the representatives “come back with an extra comprehension of the complexities of the area,” and the visit “shatters a very dangerous myth about the nature of Jewish settlers” who are often portrayed negatively but are “ordinary people.”

While the Ariel center is open, most of the visits are for one-day courses. The current emphasis is on building cabins on the property, so multi-day experiences can be accommodated. The infrastructure for the cabins and a dining area are also part of the plans.

Twila Frederick, who is involved in development for JH Israel, said “we’ve come a long way but we have a long way to go” to fulfill Nachman’s vision.

When Nachman visited the California ranch he wanted the one in Ariel to look the same — including tall trees that aren’t currently around Ariel. In fact, because of the small size of trees there, the poles for the ropes course had to be imported.

Nachman died last year and is buried on the center’s property. Heather Johnston gave a eulogy at his funeral.

JH Ranch also sends its ropes course experts to Israel on “Joshua Teams,” to live there for months at a time and train people on proper techniques for those courses.

“We’re not here to get a name for ourselves,” Johnston said. “We are here to serve.”

Ettinger said Israeli awareness of Christian support in the U.S., as exemplified by these projects, is growing.

“Increasingly, Israelis realize it’s not only the Jewish community in the U.S., it’s Americans as a whole, led by the evangelical Christians who do it based on religion, ideology and real comprehension of the nature of the threat to the U.S. and Israel, and the joint interests between Israel and the U.S.,” he said.

And that grass-roots relationship does not depend on who the president is, because presidents “zig and zag,” he said.

Every Sukkot there are massive Christian gatherings, especially in Jerusaelm. And when terrorism ramped up over the last two decades, when groups were cancelling trips to Israel it was the Christian supporters who came anyway.

In 2001, at the height of the Second Intifada, Ettinger got a call from former Alabama First Lady Bobbie James. When he asked her how things are in Mobile, she said she was in Jerusalem. She and a friend were there for two weeks, visiting hotels and restaurants to boost the ailing tourism industry.

When the former governor called her and told her to come home, she told him to stop watching the news and come to Israel, Ettinger said.

Ettinger was Israel’s consul general in Houston in the 1980s before heading the Government Press Office. Following that he was Minister for Congressional Affairs at the Israeli embassy in Washington and continues as a lecturer and consultant.

While visiting the state for the JH events, he also traveled to Huntsville, where there are numerous U.S.-Israel joint projects.

The Arrow and Iron Dome missile defense projects “have been major examples of mutually-beneficial U.S.-Israel collaboration, which has enhanced national security of both countries, as well as expanded employment, research and development, exports.”

He called Israel the “battle-tested laboratory of technologies “ for the U.S. defense industry.

The projects are 30 to 40 percent funded by the U.S., but Ettinger said “the return on investment is going to be extremely high as far as the U.S. is concerned” as some of these systems are sold to countries around the world.

Ettinger explained the strategic geographic importance of Ariel by noting the evening’s program at The Club atop Red Mountain. “From here you see Birmingham. From there, you see Tel Aviv.” Were it not for the Green Line, the pre-1967 border, Ariel would be a Tel Aviv suburb, he said.

Ariel is located half-way between the Mediterranean and the Jordan River. The nearest sizeable Israeli city inside the Green Line is Rosh Ha’Ayin.

Ariel also has a sister city relationship with Mobile, and representatives from Mobile were at the dinner.