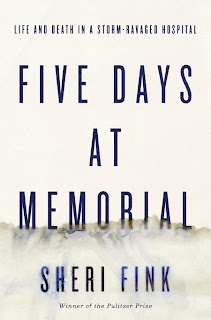 The festival kicks off on Nov. 18 at noon with the Booklover’s Luncheon, featuring Austin Ratner and his most recent book, “In the Land of the Living.”

The featured artist event hits closer to home with Sheri Fink’s Hurricane Katrina work, “Five Days at Memorial: Life and Death in a Storm Ravaged Hospital.” She will speak on Nov. 20 at 7 p.m.

The week concludes with a community Chanukah concert featuring the Maccabeats, an a capella group based out of Yeshiva University, on Nov. 24 at 2 p.m.

The Jewish Book Festival also features a bookstore offering a selection of children and young adult books, JCC Book Club selections and gifts, all provided by Octavia Books, which donates 20 percent of sales to the JCC in support of cultural programming. The bookstore is open from 9 to 11 a.m. and 4 to 6 p.m. weekdays except Friday afternoon, and during both author events.

Ratner’s semi-autobiographical book is about a Jewish family in Cleveland, Ohio, and how a series of premature deaths affect their relationships across generations. Ratner’s father died in Cleveland of lymphoma when Ratner was almost three years old, and a few years later his mother married real estate developer James Ratner.

He set out in his father’s footsteps, graduating from medical school, but decided it was time to find his own way, moved to New York and became a fiction writer — though his first work that sold was a medical school textbook.

His novel “The Jump Artist,” based on the life of photographer Philippe Halsman, won the 2011 Sami Rohr Prize for Jewish Literature, which came with an award of $100,000. Halsman was imprisoned in Austria by an anti-Semitic kangaroo court following the accidental death of his father, then released and exiled to Paris as World War II looms.

Tickets for the Nov. 18 event are $30 for the luncheon and presentation, or $10 for just the presentation. The luncheon is catered by Chef Rommel Hernandez, and groups may reserve tables on a first come, first served basis. Ratner will be available to sign his books after the event.

“Five Days at Memorial” is the culmination of six years of reporting and over 500 interviews. It is an expansion of her Pulitzer Prize-winning report in the New York Times Magazine in 2009.

Since 1926, Memorial had been a shelter each time a storm hit the New Orleans area, with many in the surrounding community seeking refuge as the area was below sea level.

When Katrina hit, there were roughly 2,000 in the building, of whom 244 were actual patients. After the levees broke, the hospital was surrounded by the flood, without electricity or basic services such as sanitation.

The book chronicles the efforts of doctors and nurses to preserve life during the chaos — and to decide who likely would not make it during an evacuation or because of limited resources and deteriorating conditions. At least 20 patients died after being injected with a morphine mix.

The second half of the book chronicles the post-storm investigation into those five days, raising the ethical and legal questions about allocation of resources in a crisis, and explores the issues of rationing, justice, end-of-life and liability in today’s health care system.

In 2006, the doctor and two nurses responsible for the injections were arrested in the deaths of four patients, but a grand jury refused to indict them.

Fink has reported extensively on emergency situations around the world and has experience with delivering aid. She did first-hand reporting from Haiti after the 2010 earthquake and in New York following Hurricane Sandy.

Her first book, “War Hospital: A True Story of Surgery and Survival,” about the genocide in Srebrenica, Bosnia-Herzegovina, was a finalist for the PEN/Martha Albrand Award for First Nonfiction and was awarded the 2004 American Medical Writers Association Special Book Award.

Tickets for the event are $5 and may be purchased at the JCC.