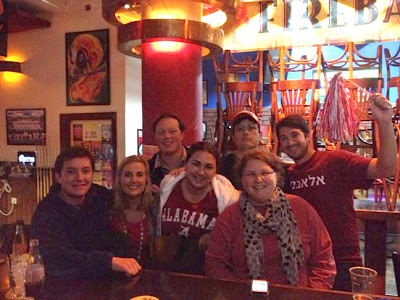 As the Jewish Federations of North America begins their annual General Assembly in Jerusalem today, much of the 23-member Birmingham delegation may seem like they are sleepwalking.

It was just after sunrise today in the holy city when, 6,598 miles away, Alabama Coach Nick Saban jumped into the arms of quarterback A.J. McCarron following the 38-17 victory over Louisiana State University. The Alabama-LSU game has in recent years turned into a major step toward a national championship for both teams and is becoming a passionate rivalry.

Just under 102,000 fans packed Bryant-Denny Stadium in Tuscaloosa, with reports that tens of thousands more were outside the stadium, soaking up the atmosphere. Joining the tailgate from afar were members of the Birmingham delegation, most of whom are on a young leadership mission to Israel from the Birmingham Jewish Federation.

After partying on Ben Yehuda Street in Jerusalem, the Tide faithful filed into Mike’s Place on Yafo Street, not far from the Old City. Rabbi Laila Haas of Birmingham’s Temple Emanu-El said they kept the bar open for the eight of them who were prepared for the all-nighter. The bar was then closed to the public at kickoff and streamed the entire game.

Six of them “celebrated the victory till the end,” she said — which came around 6:30 a.m.

Tim Thornton noted that they had already experienced a full day on their mission, climbing up Masada and floating in the Dead Sea. “I will stop by the Western Wall when the game is over and thank G-d for the victory,” he noted early in the second half.

On game day, many on the mission wore crimson shirts with a white “Alabama” in Hebrew. The Birmingham Jewish Federation offers those shirts free to Alabamians traveling to Israel, with the condition that they send the Federation a picture of them wearing it in Israel. They also have Auburn and UAB shirts.

Haas said watching that game in Jerusalem was an “amazing experience, and what a way to cheer on the Tide.”

Birmingham’s Jewish community has already received international attention this year because of Alabama football. This year’s “Game of the Century,” Alabama’s trip to Texas A&M, fell on Yom Kippur, and Temple Emanu-El issued a “no spoilers” edict for congregants, so those who recorded the game during services could watch after sunset.

Going into the game last night, Alabama was ranked No. 1, as it has been all season, and LSU was 10th in the standings.

Following the game, Haas said, “Roll Tide could be heard throughout the streets of Yerushalayim.”

For LSU fans, some solace can be had tonight, as the Mike’s Place website states it will be showing the New Orleans Saints game against the Dallas Cowboys. Kickoff will be 3:30 a.m. local time.