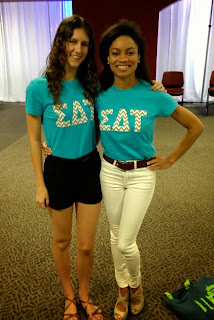 (Hannah Patterson (right), new president of Sigma Delta Tau at the University of Alabama, and Gwendolyn Gardiner at this year’s recruitment).

Two months ago, the Crimson White, the student newspaper at the University of Alabama, caused an international uproar by exposing that the traditionally white sororities there had admitted only one black member through the formal rush process, and that was two decades ago.

“I’m very honored and very blessed,” she said, “but I didn’t think it would get so publicized by the media.” She understands why so many people are making a big deal about her election, but going into it she never thought about it that way.

Since the news got out, “the past few days have been very busy.”

The piece spoke of several highly-desired black candidates who were not admitted to the historically-white sororities during the formal rush process, even though the sorority members were supportive. The sorority members blamed pressure from old-guard alumni as the roadblock.

After a week of protests and international exposure, the recruitment process was reopened and 11 black students were offered bids to historically white sororities, with four accepting immediately. The number was expected to rise as the year progresses. About 13 percent of Alabama’s enrollment is black.

The historically-black sororities integrated in the 1980s, according to the Crimson White.

Sigma Delta Tau at Alabama had been all-Jewish until the turn of the millennium. In 2011 the first black member was admitted, and there have been two more since then, and a third who transferred before being initiated.

When the controversy erupted in September, Patterson said, “Our sorority just didn’t really pay so much attention to it, because we were already a diverse sorority. We never saw race or the color of someone’s skin as an issue.”

The chapter did not participate in the formal rush process that was the focus of the controversy, opting for their own informal recruitment.

Currently, eight of the 38 members are Jewish, but Patterson points out that she and many of the non-Jewish members “attend Shabbat dinners and other activities at Hillel.”

Patterson is from a town near Pittsburgh, Pa. She started off at the University of Dayton but transferred to Alabama for her junior year.

“I just wanted something different, a little further away from home. I wanted to grow… where you’re in a totally new environment, new culture, new people,” she said.

When she arrived in Tuscaloosa, she participated in the formal recruitment process for the sororities but did not feel that she found a good fit.

She went to the informal rush at Sigma Delta Tau. The hour-long visit “was very genuine, very one-on-one,” she said.

“There was something about the way they made me feel so welcomed, I kept returning,” Patterson observed. ”They truly gave me a family, being so far away from home.”

Regina Broda, the previous sorority president, told the Crimson White that even before Patterson was offered a bid, “I knew that she had the potential to do wonderful things for our chapter.”

She added that Sigma Delta Tau was established by seven Jewish women in 1917 who were discriminated against by other sororities. “Sigma Delta Tau nationally does not discriminate because it goes completely against our founding principles.”

The election was held on Nov. 6. To run for office, a candidate has to write a letter of intent a few weeks before the election. Three national representatives of the sorority review the letters and decide a slate, which is submitted to the chapter. The chapter can then vote to accept or decline the slate.

Patterson said the slate was turned down, so they held votes for individual positions. She had been listed on the slate for president, and was approved in the vote.

A senior majoring in chemical and biological engineering, Patterson will remain at Alabama for a fifth year because of coursework related to her major and her transfer from Dayton.

While others focus on the significance of her election, the change that Patterson is most focused on is with Sigma Delta Tau, which has been going through a “revitalization period.”

“I would love for the chapter to grow… to have more involvement on campus,” she said. “We have a very strong sisterhood as it is right now and with growth I hope that we would continue keeping that strong sisterhood and strong sense of tradition.”

Since the election, “it’s only been a week, and I’m trying to get things in order for my chapter, preparing for finals myself, then getting things prepared for the new executive board for next year.”

And yes, fielding calls from reporters.