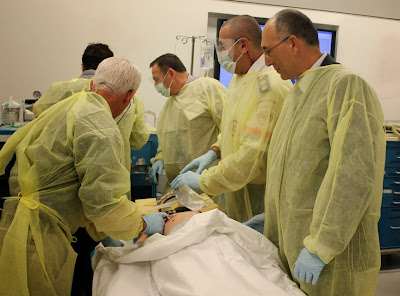 The Israeli team does an emergency response simulation at the LSU Health Sciences Center on Dec. 5.

After four days of joint sessions between Israeli and New Orleans medical and emergency experts, Avi Rivkind had a confession.

The head of the department of general surgery and the shock trauma unit at Hadassah Hospital said “I want to say we learned. For an Israeli to admit to learning something is difficult.”

Nine experts from Israel came to New Orleans for the New Orleans/Israel Partnership on Emergency Response and Medicine, a week of meetings with counterparts from a wide range of hospitals and medical centers in the New Orleans area.

Norman McSwain, who developed an emergency management system for New Orleans and is the only person in the history of the American College of Surgeons to receive all five of the major trauma awards, noted the difference in experiences between the two groups.

The partnership grew out of discussions between the Jewish Federation of Greater New Orleans and Bill Hines of the Jones Walker law firm. Michael Weil, executive director of the Federation, said “We started our conversations just over 2 years ago.” Hines was involved in numerous initiatives to bring back New Orleans post-Katrina and learned of the Federation’s efforts to rebuild the Jewish community and attract newcomers.

They met to have a “more formalized” partnership. Weil said “when we told him about the partnership with Rosh Ha’Ayin and mentioned this idea” of an emergency response conference, “Bill immediately jumped up and said that’s something we’d like to do.”

Rosh Ha’Ayin is the New Orleans Federation’s Partnership2Gether community, and some of the Israelis who attended NIPERM live there.

Hines noted that as a member of neither the medical nor Jewish communities he was “here to basically facilitate.”

“I’ve never seen a terror attack but I’ve seen a lot of bad things happen in New Orleans,” such as Hurricane Katrina in 2005 and the Howard Johnson’s sniper in 1973, Hines said.

Part of the impetus for the partnership was to help New Orleans prepare for a sudden major incident like the April 2013 Boston Marathon bombing. Many emergency professionals in Boston credited the training they got from counterparts in Israel with saving lives and improving their response.

Weil said the triage system at Massachusetts General Hospital in the bombing aftermath was based on training provided by Rivkind.

Led by Hines, organizers pulled together hospitals, medical and academic centers from across New Orleans in support of the initiative.

Noting the friendly trash-talk between representatives of Hadassah and Sheba Medical Center among the Israelis, Hines said that was nothing compared to getting all of New Orleans’ medical centers working together.

“All these players, it’s like putting eight law firms in New York that compete with each other together” and having them “bury their competition for at least a week.”

About 200 registered for the week, which began on Dec. 2 with a day of Hospital Preparedness sessions, hosted by Touro Infirmary. Sessions included case studies from Hurricane Katrina and the Second Lebanon War, care of newborns and those with special needs during disasters, and decontamination procedures.

New Orleans has emergency drills, but McSwain noted that they go up to the hospital doors and not inside. “I think that’s a big mistake,” he said.

He suggested having all the hospitals collaborate on simulations, such as an incident at the Superdome. He also urged a collaboration exploring violence from a medical point of view.

The second day’s focus was trauma, triage and blast injuries, held at Ochsner. The next day was field management and first response, held at Tulane University’s School of Medicine. Representatives of New Orleans EMS, the fire and police departments, Homeland Security and the Superdome were presenters. The Israelis spoke about medical response and field management following blasts.

There were also two public lectures during the week. Arnon Afek spoke on “Ethical Dilemmas in Disaster” on Dec. 3 at Ochsner, and Rivkind spoke about “Lessons Learned from Disaster” on Dec. 4 at the Lavin-Bernick Center at Tulane.

Afek, a professor of medicine at Tel Aviv University, was director of medical affairs for the Ministry of Health and chaired the residency program in the Israel Defense Forces Medical Corps.

On Dec. 5, there was a discussion of traumatic psychological stress injuries. That afternoon, the delegation visited the Isidore Cohn, Jr., MD, Student Learning Center at the LSU Health Sciences Center New Orleans. It is one of the most sophisticated simulation-based emergency training environments in the country.

As Cohn watched, the Israelis were put through a simulation of casualties coming in after a runaway car plowed into a crowd.

The LSU Center has a collaboration with Israel going back over a decade. Howard Osofsky, the center’s professor and chair of psychiatry, created a working group of international experts in the psychological impact of a variety of emergencies on families and children. The group included Professor Danny Brom from the Israel Center for the Treatment of Psychotrauma of Herzog Hospital in Jerusalem, and Arieh Shalev from Hadassah, to improve response following disasters.

Ironically, the planes carrying participants for the first meeting of LSUHSC’s International Consortium on Meeting the Needs of Children and Families Following Disasters, Terrorism, and Mass Destruction, landed just ahead of Tropical Storm Isidore in 2002. The Consortium met in New Orleans annually until the devastation of the city following Katrina brought the meetings to an end.

On Dec. 6 there was one final presentation on the Israeli Medical Corps’ humanitarian missions. 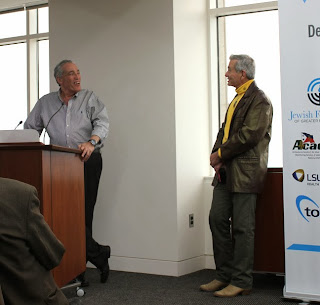 McSwain, who has written or revised over 25 textbooks, said the week was “an extremely unique opportunity.”

“I certainly think this needs to be continued,” he said, and urged organizers to find a way to get the group together again.

Hines said the plan is to make this a regular event, and there will be a discussion on whether it should be every 18 months, every 24 months or a different time-frame.

Rivkind said the continued collaboration “should be from today.” There were discussions on further initiatives, especially ones that can be done as part of the partnership with Rosh Ha’Ayin.

Hines said there was a discussion on whether to make this a regional event, especially including the large medical community in Birmingham, but the decision was to do just the New Orleans area this time “and get it right” for the first event.

Zeev Rotstein, senior cardiologist and former director of Sheba’s Acute Care Hospital, called the week “a good beginning” and said “being a citizen of Rosh Ha’Ayin, I am very happy to be representing the city here and I look forward to more joint ventures.”

He spoke about an initiative on dealing with road accidents, the number one killer of young adults. Through safe driving initiatives “we can share programs, exchange students, working together, because this is really bettering the world.”

“There is a greater opportunity now that we know each other,” Rotstein said. “It’s time to walk together.”

Afek mentioned several initiatives, including a national Israeli program on suicide prevention after a successful pilot program in the army. He also spoke about collaboration on operating medical systems during a lack of resources, and an Israeli “healthy cities” initiative promoting walking and outdoor exercise.

McSwain spoke of a new system to promote teaching hemorrhage control and the use of tourniquets “to everyone in the country, the same way we teach CPR.”

During events like the December 2012 school shooting in Newtown, Conn., medical personnel are not allowed on the scene until law enforcement has controlled the situation. Having law enforcement personnel and civilians trained in hemorrhage control will prevent greater loss of life from victims bleeding out.

McSwain said in the next two years, they plan to train all law enforcement personnel in the state, and then use the model to start teaching citizens.

One of the Israelis then proposed that a similar educational program start in Israel with Rosh Ha’Ayin as the pilot community.

Danny Shani, Rosh Ha’Ayin chair of the partnership steering committee, said “We can and should collaborate in other subjects in the medical field.”

McSwain said he and the Federation’s Allison Kushner have discussed assembling the week’s proceedings for distribution and possible submission to medical journals.

Many admitted that when the idea was first floated, there was a lot of skepticism as to whether a conference like this could be assembled. Avi Kagan, Partnership director for the Jewish Agency, noted that they were trying to attract “a lot of very busy people” to commit to a week in New Orleans, but “I’m thrilled to see things really happen.”

Through this and other initiatives, “the connection between the Jewish Federation and the city of Rosh Ha’Ayin will grow.”

During their visit, the Israelis were introduced to Bourbon Street and other local sites, then enjoyed home hospitality and visited area congregations over Shabbat after the conference.

While in New Orleans, Shani and Kagan attended a Chanukah lighting at Community Day School in Metairie. Students from New Orleans and Rosh Ha’Ayin lit the candles simultaneously via video link, and sang together.

Hines added that the conference “has far exceeded my expectations.”

Afek said “to us (the partnership) is not something to be taken lightly. He concluded by saying “Next year in Jerusalem — and in Rosh Ha’Ayin.”

At the closing reception, Gerald Berenson spoke to the delegates about his disaster experiences, calling himself “just a charity hospital doctor.” In reality, he is the principal investigator of the Bogalusa Heart Study, an internationally-renowned study that explored the early natural history of heart disease.

He noted the Israelis have to prepare for disasters before they happen. In New Orleans, “we got a flood.”

He remarked that he was at home when the levees broke, and the water eventually started rising through the floor. “Some sheriff deputies came up to our home with sidearms and AK-47s… to pack us up and take us to Baton Rouge.”

There he went to the campus of LSU where he had the “privilege” of seeing cardiologists he had trained in action. “We had to read X-rays on white bed cloths,” he said.

He spent six weeks there, then said “I got to get out of here and put my program back together,” which he did while shuttling among Baton Rouge, New Orleans and Bogalusa.

He added, “Israel and New Orleans are so very different, but as members of the medical community we share the same values.

“We can help to repair the world.”