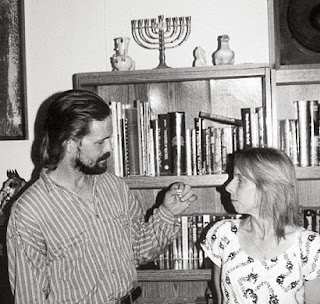 In this 1998 file photo, Wayne and Sue Willis at their home with a Star of David necklace that was banned by the Pike County schools as a “gang symbol.”

Wayne Willis, who with his wife, Sue Willis, filed a lawsuit in 1997 against anti-Jewish activity in Alabama’s Pike County School System, died on Dec. 24 in Green Bay, Wisc., after a long battle with cancer. It was his 53rd birthday.

Born in Pennsylvania, Willis served in the U.S. Army from 1978 to 1989. He married Sue Works in 1990. She had grown up near Lexington, Ky., the only Jewish family in her town, and attended the synagogue where Rabbi Milton Grafman had served in the 1930s before taking over Birmingham’s Temple Emanu-El for over three decades.

Soon after they married, they moved to Pike County where he was a truck driver. Though he had not undergone formal conversion, he had practiced Judaism for several years before the lawsuit.

The suit alleged religious harassment of their children, who were the only Jewish students in the school system located roughly half-way between Montgomery and Dothan. After years of incidents, they filed suit to put an end to the unconstitutional practices and did not seek monetary damages.

Incidents included a ban on the Star of David as a “gang symbol,” teachers forcing the children to bow their heads when Christian prayers were being delivered, mandatory school assemblies where preachers spoke of salvation and faith in Jesus, and one daughter being sent to the hall so Gideons could distribute Christian Bibles in the classroom.

One teacher was alleged to have stated that if the parents weren’t going to save souls, the teachers would have to. The final straw came when one son, then in eighth grade, was sent to the office and as punishment ordered to write an essay on “Why Jesus Loves Me.”

In April 1998, the suit was settled “amicably” as the school system signed a consent decree using guidelines similar to those in a DeKalb County lawsuit, also about overt Christian activities in public schools.

Despite the settlement, the Willis family still faced some hostility in the community after the case drew national attention, including a lengthy piece in George magazine.

In 1998, Dean Young, chief spokesperson for Alabama “Ten Commandments Judge” Roy Moore, traveled to Green Bay, Wisc., to speak on behalf of a proposed Ten Commandments monument being considered for the county courthouse. While there, he verbally accosted the community’s only rabbi, Sid Vineburg, who opposed the monument.

After an article about the encounter ran in this publication, the Willises called Vineburg to talk about church-state battle experiences. They were surprised to learn that Vineburg knew all about them and their case, and before long the Green Bay congregation banded together to move the family from Alabama to Wisconsin, where they have lived since 1999.