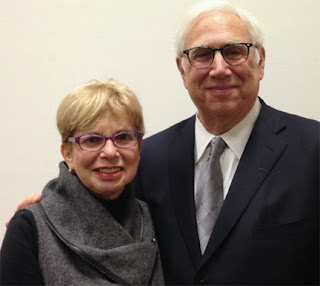 The New Orleans Section of the National Council of Jewish Women will honor Marjorie and Scott Cowen as the 2014 Hannah Solomon Award recipients.

The luncheon will be held at the Hilton Riverside on Feb. 3 at noon. A reception with a cash bar will begin at 11:30 a.m.

The Cowens arrived in New Orleans in 1998 as Scott Cowen became the 14th president of Tulane University.

Marjorie Cowen is Tulane’s senior advisor for external affairs. Prior to coming to Tulane, she was executive director of external relations and administration at the Weatherhead School of Management, Case Western Reserve University.

Scott Cowen, who plans to retire this summer, was named one of the nation’s top 10 best college presidents by Time magazine and in 2012 was named chair of the Association of American Universities.

He is also the recipient of The Times-Picayune’s Loving Cup, which each year honors a New Orleanian who has worked unselfishly for the community without expectation of recognition or material reward. He has been honored by New Orleans CityBusiness as one of the 30 “Driving Forces” in New Orleans in the last 30 years and by Gambit as New Orleanian of the Year in 2011.

He also navigated the challenge of Hurricane Katrina in 2005, which wiped out the fall semester. Under his guidance, a recovery plan was put in place and the campus opened in January 2006 with 87 percent of undergraduates returning.

In June 2008, Cowen announced the successful completion of “Promise and Distinction: The Campaign for Tulane,” which exceeded its $700 million goal, making it the largest university fundraising effort in the history of Louisiana. Upon the completion of a comprehensive university-wide planning process in 2012, he launched a $1 billion campaign to support the university’s long-term future.