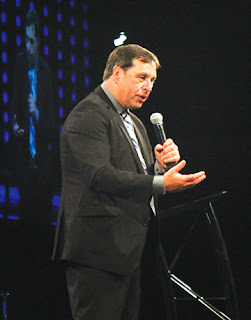 A new organization plans to build on the legacy of Alabama’s pro-Israel passion, kicking off with a statewide Alabama Celebrates Israel gathering in Huntsville on March 25.

The event will be the public launch of the Alabama-Israel Task Force. Laura King, former president of the Jewish Federation of Huntsville and North Alabama, said the organization has evolved out of dialogues about Israel that have been ongoing with the Christian community in north Alabama.

To start the ball rolling, two Israeli speakers came to Alabama for a series of meetings in late January, some of which turned out to be reunions. Eeki Elner, founder of the Israel Leadership Institute, and Major General Eyal Ben-Reuven visited churches in Huntsville, Birmingham and Montgomery, and Birmingham’s Temple Emanu-El.

The Institute is an Israeli partner of AITF.

In January 2013 King had hosted Elner in Huntsville, and one of his talks was at the Dwelling Place Church. The programs were to introduce ILI to the area, Elner noted.

During his talk at Dwelling Place, “In the middle of it while I was presenting… Pastor Patrick (Penn) disappeared. He came back with a picture” that turned out to be of them meeting in Sderot five years ago, along with Bob Sommerville of Awareness Ministry in Huntsville.

“Laura invites me here to get to know the Jewish partners and her Christian friends… and as a matter of fact I met them before,” he recalled.

Elner founded the Israel Leadership Institute in 2006, seeking to develop future generations of political, civic and business leaders for Israel.

He decided to located the institute in Sderot, which is better known as the town near the Gaza Strip that in recent years has been subjected to missiles from Gaza — over 12,000 since 2001.

Because in Israel leadership is done by personal example, he moved to Sderot, and after less than a year a missile hit his home, landing where he had stood less than a minute earlier. Nevertheless, the first ILI class started in 2008.

In addition to heading the Institute, Elner has served as a special envoy for the Ministry of Foreign Affairs, speaking at the AIPAC Policy Conference in 2012 and at numerous pro-Israel Christian conferences.

When Ben-Reuven retired after over 35 years in the Israeli military, he was second in command only to the Chief of Staff.

Ben-Reuven was battalion commander in the first Lebanon War, then was commander of the first digitized division of the IDF.

Their January visit was the culmination of a year of discussions, said John Buhler of Mission Huntsville.

“There are many in the Christian community who care deeply about Israel’s future because of the tremendous blessing Israel has been to our heritage and faith,” he said. They started to discuss, “how can we partner, how can we explore possibilities.”

As they began, one thing that “began to stir in our heart” was the 70th anniversary of the famous 1943 resolution by the Alabama Legislature calling for “the establishment of a Jewish homeland in Palestine.”

Buhler said they asked “how could we embrace the legacy that our state has? There are many things in our state’s past that we might be ashamed of, but there are also moments worthy of remembrance and honor.”

They started discussing doing more than just an event, “and really allow the history of our state to become a catalyst for us and to inspire us to go beyond.”

The AITF will be a way for the Christian community to partner with the Jewish community and help strengthen the Alabama-Israel relationship on a grass-roots level. Buhler said the idea is to take existing relationships, like Birmingham’s sister city relationship with Rosh Ha’Ayin and “multiply it throughout the state.”

Elner said AITF “is partnering with our leadership institute to build bridges and present opportunities for the people of Alabama — both Jews and Christians — and the people of Israel, to connect, cooperate, exchange and get involved.”

He said the Institute feels “there is a lot of ready-to-go support for Israel in Alabama, support which has been expressed in many initiatives,” Elner said. The Institute wants “to look at all aspects, all sides, and strengthen them to make Alabama and Israel closer than ever.”

AITF’s first project is raising resources for an Emergency Preparedness and Disaster Response Center at ILI, “which will be serving both states,” Elner said.

The center will train emerging young leaders in Israel in emergency and disaster response. In a later stage, Alabama young leaders will be invited to train and share workshops with their Israeli colleagues.

“We want to give something in return.”

Another important aspect of the leadership training is that “future leaders of Israel must have the channels to be able to communicate with people in Alabama, or Ohio,” Elner said.

Buhler sees AITF as bridging relationships and networks of pro-Israel activity in the Christian and Jewish communities, “when it makes sense for the Jewish and Christian communities to co-labor in some type of area, and particularly in regard to the Alabama-Israel relationship.”

Buhler said he knows of many pro-Israel efforts in the Christian community, from Christians United for Israel to the International Fellowship of Christians and Jews, to individual churches. Especially in rural areas, “many of them don’t know anyone in the Jewish community. If there are opportune times or desires to unite in some kind of Alabama-Israel endeavor, we want to have an organization that at least has contacts, has relationships so we can mobilize that extra level when and if it makes sense to do so.”

Elner sees it as “an incubator of ideas.”

Elner and Ben-Reuven also had a luncheon with 21 pastors in Huntsville, spoke at Redstone Arsenal and met with several politicians.

Ben-Reuven said he was asked by Elner some time back to accompany him on the nine-day trip to Alabama. He was reluctant at first. “I have six kids, I live in the north of Israel, I am so busy with so many projects,” he said.

“When he told me about John and Laura, and the feeling you get here… it influenced me,” Ben-Reuven said. “I am here and I am very happy to be here.”

Ben-Reuven said Israel’s mentality has changed recently. In the past, Israel regarded itself as a small, lone boat in a stormy sea, needing to trust only itself. Today with globalization, “we are all on a big ship with lots of rooms. There is no captain” and the direction comes from coalitions of groups.

In his Alabama appearances, Ben-Reuven spoke about his service in the Yom Kippur War, where he and one other soldier were the only survivors of an attack on their tank in the Sinai. Surrounded by Egyptians, he stayed the night guarding his wounded comrade until they could be retrieved.

He then was immediately sent to the Golan, where his father was also fighting, unbeknownst to each other at the time. Afterward, his father visited him and said that when he fought in 1948, “he couldn’t dream he would have to fight beside his only son and to be so worried.”

Ben-Reuven said he does not dream like that, because he knows his children will continue to experience war “because this is our life.”

The military’s most important job, he said, is to try and prevent war because “war is tragedy.

“I an doing whatever I can to prevent war. In our area it is very difficult,” he observed.

For the battle-tested general, what got to him emotionally was having to pick up tiny gas masks soon after his children were born. “It is very difficult. Even for a general.”

He noted that the last time Israel fought an actual army was in 1973, and each war has a different set of parameters and needs different solutions. Places like ILI teach the tools to enable leaders to come up with the right answer to a particular situation. “That’s why this institution is so unique.”

The Huntsville event will start at 7 p.m. on March 25 at the Von Braun Center. The evening will “honor and celebrate” the history of Alabama’s relationship with Israel, including the 1943 resolution.

Buhler said the event will use the state’s history with Israel to “inspire us to great things going forward.”

It will also be the formal kickoff of the “People’s Resolution of Reaffirmation and Renewed Commitment in Our Generation” of the 1943 resolution.

The evening will include political and religious leaders from across the state, and there will be an Alabama-Israel State Leadership Roundtable the next day.