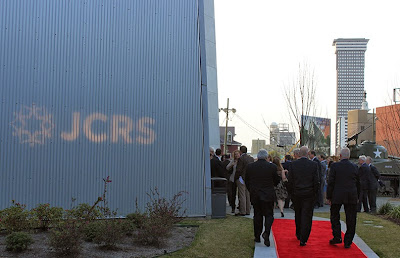 For the third Jewish Roots annual gala, the Jewish Children’s Regional Service moved to a larger venue, the National World War II Museum Freedom Pavilion, for its March 22 “Jewish Roots of Broadway” celebration. Just like the previous two years, they filled the room.

A crowd of 460 attended the evening, which also honored the Scharff and Tolmas families for their years of service to JCRS and the community.

After a season of unpredictable winter weather, the skies and temperature were perfect for the outdoor reception. Once indoors, supporters of the regional children’s agency went through buffet lines before the formal program.

Both families have New Orleans roots but currently reside elsewhere and have ties to more communities, so there was a large out-of-town contingent in attendance.

Bruce Katz, meteorologist at WVUE-TV, was emcee of the evening, and started by paying tribute to an organization that was “vital” for his family. He and his three brothers, New Orleans natives, received college aid from JCRS.

The agency, which provides need-based scholarships to those attending non-profit Jewish overnight camps and to Jewish college students in a seven-state region “was absolutely there for our family,” he noted.

Goldberg said both families had “multi-generational involvement” with JCRS, with children of both families serving as JCRS presidents in the last 17 years.

He recalled that when he first moved to New Orleans to take over the agency in 1998, “one of the first families I recall meeting was the Scharff family.”

Goldberg added, “once you become a friend of the Scharffs, you are a friend for life.”

Lee Scharff thanked JCRS, along with friends and family who traveled from “as far away as Charlotte and (Washington) in the east, San Francisco and Kenner in the west.”

Goldberg commented that one of individuals who was most excited about the Tolmas family being honored was Harry Mayronne, the evening’s pianist and musical director. Mayronne “was one of the many thousands of New Orleanians who grew up under the care of Hyman Tolmas.”

Jeanie Tolmas represented her family in accepting the award.

Dan and Florence Scharff have Southern family roots going back 160 years. He grew up in New Orleans, while she is originally from Montgomery. They met at Tulane, and after being married in Montgomery moved to New Orleans, where they lived until they lost their home in the storm. 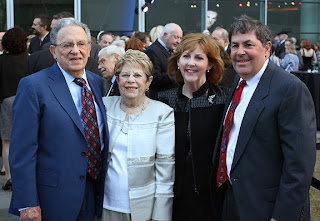 Since Katrina they have made their home in Baton Rouge.

Also honored were son and daughter-in-law Lee and Susan Scharff, who met at the University of Alabama. He was president of JCRS from 1997 to 1999, and is past president of the Brotherhood at Temple Sinai and Gates of Prayer.

New Orleans native Hyman “Doc” Tolmas was already a physician when he met Connie Cohen of Dallas, who was at Newcomb. He practiced medicine for 55 years and was president of Anshe Sfard, while she became active in volunteer work. 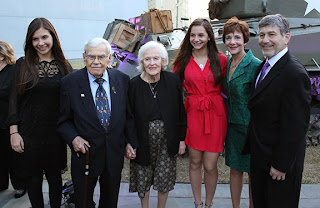 Daughter Jeanie graduated from Tulane Medical School, becoming a local “Top Doctor.” She served as JCRS president from 2003 to 2005.

Son Alan founded Texas Financial Forensics in Dallas, while his wife Gina, a Tulsa native, established an interior design firm. After the storm, the rest of the family moved to Dallas. They have established four scholarship funds at JCRS.

Two others involved in the “Musical Night from Gershwin to Godspell” had JCRS ties. Professional drummer Bruce Miller is the immediate past president of JCRS who is also a past JCRS recipient. The concert narrator, Hank Greenberg, is past president of the New Orleans Concert Band, which performed at the 2012 “Jewish Roots of Jazz” gala. All four of his grandparents were raised at the Jewish Children’s Home, which became the JCRS when the home closed.

Vocalists were Chris Wecklein, Darcy Malone and Amy Alvarez. They were also joined by Dr. Sick and Mark Brooks. Playwright Jon Broder wrote the narration and worked with Mayronne on the music selection.

In the program notes, Goldberg wrote that for many Jews who went on to fame in the world of Broadway, Jewish summer camp was the first opportunity to take part in theater.