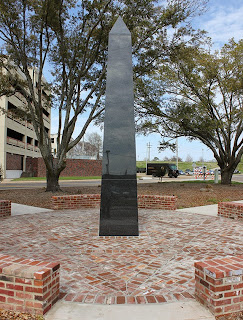 With Holocaust Remembrance Day falling on April 28, many communities will have commemorations this month with a wide range of topics and speakers.

Waters served in Vietnam with the Navy for five years, then established Waters Investments, a real estate business in Louisiana. He now lives in South Carolina.

Michael Tudor, an Alexandria attorney who started the process leading up to last year’s dedication of a Holocaust memorial in Alexandria (left), said Patton was in Alexandria during the Louisiana Maneuvers, along with Dwight Eisenhower and Omar Bradley.

The Maneuvers were training sessions for the U.S. military, testing a wide range of tactics that ultimately enabled the country to defeat Nazi Germany.

Tudor said the three leaders often stayed and played cards in the Mirror Room of the Hotel Bentley, three blocks from the new memorial. The hotel is currently being restored.

There are two historical markers at the monument, one of which describes Alexandria’s role in the war. A new Anne Frank marker is scheduled to arrive before this year’s commemoration.

The April 28 event will start at the monument at 6 p.m. After the opening service, there will be a two-block procession to Emmanuel Baptist Church for the bulk of the program, including Waters’ talk.

As the procession passes the Cathedral for the Northern Diocese of Louisiana, the cathedral’s bells will ring.

Also in Alexandria, the Museum of Art is showing “Theo Tobiasse: Textural Emergence” as part of the Days of Remembrance. The exhibit opened March 7 and runs through May 24.

As a teenager in Paris, he and his family were forced into hiding during the city’s Nazi occupation from 1942 to 1944. He spent most of his time reading and drawing.

After the war, armed with a portfolio of drawings, he began his artistic career as a graphic designer and painted at night. By 1969 he was able to devote all of his time to painting. The works in this exhibition are Carborundums, Aquatints and Lithographs from the 1980s.

Tobiasse, who died in 2012, put his innermost feelings into almost all his works and his little “secret,” entrusted only to his paintings: a personal message which he wrote in Yiddish and then glued onto the canvas before painting or collaging over it. No one will ever know the message without destroying the painting itself.

In Shreveport, this year’s Holocaust commemoration is tied with an effort to give life.

The twin drives are in memory of Zach Guillot of Seattle, who died from an aggressive form of childhood leukemia in February at age 9. His grandparents, Linda and George Guillot, used to live in Shreveport, and his father, Jeff, grew up at B’nai Zion.

The drive is aimed at “giving new life through blood transfusions on a day that we mourn the loss of 11 million.”

That afternoon at 4, the 31st annual Northwest Louisiana interfaith Holocaust remembrance will be at the Christian Center on Idema Street in Shreveport. There will be a candle lighting ceremony and reading of the winning entry in the high school writing competition.

The performance features Tony Kushner’s English translation of the Hans Krasa children’s opera “Brundibar,” which was performed 55 times by children in the Terezin concentration camp.

Also featured will be Charles Davidson’s “I Never Saw Another Butterfly” song cycle for soprano, based on the book of drawings and poems from the children of Terezin. Christie Weber will be the featured performer, accompanied by an ensemble from the Huntsville Community Children’s Chorus and Ars Nova singers.

Ela Stein Weisberger, a survivor of Terezin now living in New York, will provide a pre-show discussion of her Terezin experiences. She was 11 when she was sent to the camp in 1942 and was liberated in 1945. While at the camp, she played the pivotal role of the cat in “Brundibar.”

Weisberger will also speak at Huntsville’s Temple B’nai Sholom on April 9 at 7 p.m.

Rabbi Elliot Stevens of Montgomery’s Temple Beth Or will be the keynote speaker at the State of Alabama Holocaust Commemoration, April 29 at 11 a.m. at the Old House Chamber. A proclamation from Governor Robert Bentley will be presented.

A lunch follows the state commemoration. Reservations are required for the lunch, which is $10, and can be made through the Birmingham Holocaust Education Center.

Philip Bialowitz, one of only eight living survivors of the Sobibor extermination camp, will be the keynote speaker at New Orleans’ community-wide Holocaust Memorial Program on April 27 at 7 p.m. at the Uptown Jewish Community Center.

The memorial program remembers and honors local survivors while educating the public about the horrors of the Nazi regime and teaching the importance of tolerance. The evening is free and open to the public.

Bialowitz participated in the largest successful prisoner revolt of the Holocaust. He will share his experiences at Sobibór and discuss the continued importance of mutual respect among people of different beliefs.

During the program, the ninth Annual Educator of the Year award will be presented to Tony Behan, a religion and theology teacher at De La Salle High School in New Orleans. This award recognizes local teachers who do an outstanding job integrating Holocaust education into their curriculum.

A Holocaust remembrance will also be held at Gates of Prayer in Metairie on April 27 at 11 a.m.

In Birmingham, educational programming began in March with an annual Brown Bag Lunch series at the Birmingham Public Library, featuring sessions on the Holocaust each week.

In April, the Levite Jewish Community Center is doing “27 Days of Understanding and Tolerance” leading up to Holocaust Memorial Day, in conjunction with the Birmingham Jewish Federation’s Jewish Community Relations Coalition.

Visitors to the LJCC will be asked to participate in an activity centering on understanding and tolerance.

Toward the end of the 27 days there will be a viewing of the new JCC Holocaust memorial garden, and on April 27 the program concludes with the 2 p.m. screening of “No Place on Earth.” The documentary talks about Esther Stermer of Ukraine, who in October 1942 leads her family to hide from the Nazis. They spent about a year and a half living underground, in two caves.

B’nai Israel in Monroe will also screen “No Place on Earth” at its remembrance on April 27 at 2 p.m.

Birmingham’s community program will be April 23 at 7 p.m., at Samford University’s Brock Recital Hall. Concert pianist and Grammy nominee Mona Golabek will present “The Pianist of Willesden Lane,” based on her book “The Children of Willesden Lane.”

“I was so overwhelmed by the love my grandmother showed in sending her daughter away, losing her forever to save her, that I vowed to share this story with the world,” Golabek said.

The evening will also include a candle lighting ceremony.

The Birmingham Holocaust Education Center also announced that a set of the exhibit “Darkness Into Life” about Holocaust survivors in Alabama will be permanently housed at the Friedman Center at Knesseth Israel in Birmingham.

On April 8, the Birmingham Holocaust Education Center, Anti-Defamation League and University of West Alabama hold an educators workshop at the Livingston campus.

The Jewish Federation of Huntsville and North Alabama will hold its commemoration, “America in the Shadow of the Holocaust” on May 4 at the Huntsville Museum of Art, starting at 2 p.m.

Guest speaker will be Leslie Kahn, granddaughter of Holocaust survivors who were rescued by a relative in Huntsville, Lawrence Goldsmith. Frustrated by the State Department during his efforts, Goldsmith went through other channels, including Senator John Sparkman, to get the family out of Europe.

On April 17 at noon, Dan Puckett, author of “In the Shadow of Hitler: Alabama’s Jews, the Second World War and the Holocaust,” will speak on “The Resettlement of Jewish Refugees in Alabama 1938-1941” at the Alabama Archives in Montgomery.

Jackson’s Holocaust remembrance program will be April 26 at Beth Israel, featuring University of North Carolina at Charlotte Professor James Grymes, who is interim chair of the department of music, and Marta Szlubowska, concert mistress for the Mississippi Symphony.

Grymes is author of “Violins of Hope,” about the power of music even during the horrors of the Holocaust. According to a profile of the book, “for some musicians, the instrument was a liberator; for others, it was a savior that spared their lives. For many, the violin provided comfort in mankind’s darkest hour, and, in at least one case, helped avenge murdered family members.”

The book talks about Israeli violin maker Amnon Weinstein, who is working to bring these instruments back to life as a tribute to those who were lost in the Holocaust, including 400 of his relatives.

Also in Jackson, the Oscar-nominated film “The Lady in No. 6” will be screened at Beth Israel in cooperation with Jewish Cinema Mississippi. It tells the story of Alice Herz-Sommer, who was the oldest living Holocaust survivor at age 110. She died one week before this year’s Oscars ceremony. A pizza lunch will be served at noon on April 27, the film will begin at 12:30 p.m.

Baton Rouge’s commemoration will be on April 27 at 4 p.m., at Beth Shalom, sponsored by the Jewish Federation of Greater Baton Rouge and the Advocate Educational Services Department.

Holocaust survivor Manny Klepper of Lafayette will speak, and there will be recognition of essay contest winners.

Klepper was almost seven years old during Kristallnacht. A group of young men invaded their home in Trier, trashing the place. Afterward, a group of nuns from the convent next door came by to see what the noise was, and spent the entire night helping clean the house.

Klepper’s father was in the resistance. It took until 1940 for family members in the United States to go through the bureaucracy to get the rest of the family out of Europe, which at that point could be done only via Russia to Korea and Japan. He arrived in the United States in late 1940.

Mobile’s community Holocaust commemoration is done in conjunction with the Christian-Jewish Dialogue. This year’s event will be at Springhill Avenue Temple on April 27 at 7 p.m.

The event will feature artwork, poems and essays by Mobile County students, and a special recognition to Agnes Tennenbaum, a Holocaust survivor who moved from Arizona to Mobile in 2006.

Also in Mobile, the exhibit “Helene Berr, A Stolen Life” about “the French Anne Frank” continues at Spring Hill College through Aug. 10.

Donald Berry of the University of Mobile and director of the Gulf Coast Center for Holocaust and Human Rights Education will be the guest speaker at “Unto Every Person There Is A Name” at Beth Israel in Gulfport on April 28 at 7 p.m.

Montgomery’s interfaith Holocaust memorial service will be on April 27 at 3 p.m. Temple Beth Or will host. There will be readings and presentations by numerous clergy, and Turia Stark Williams will sing.

In Auburn, a Holocaust remembrance is scheduled for April 27 at Beth Shalom, starting at 3 p.m.

Dothan’s Temple Emanu-El will hold its Holocaust remembrance at the April 25 Shabbat service.