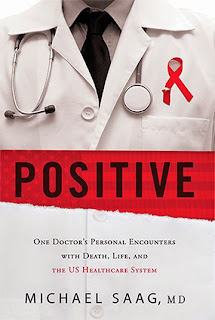 Michael Saag, who has been in the trenches in the scientific battle against AIDS for three decades, always knew he was going to write a memoir. He just didn’t intend it for an audience wider than his family.

That changed as he saw the debate over the Affordable Care Act, better known as Obamacare, rage in Washington and across the country. The result is “Positive: One Doctor’s Personal Encounters with Death, Life and the U.S. Healthcare System.”

Saag said the book uses his experiences in the fight against AIDS as the thread to weave a discussion about the dysfunctional state of health care in the United States.

His great-grandfather, a Russian Jew who immigrated to the United States around 1875 and for whom Saag was named, wrote his memoirs in 1939. “I always felt really connected to him because he told the story,” Saag said.

He intended to write his memoirs for family, but “I got so angry” watching the health reform debate. “Nobody was saying the obvious — that our current health care system is abysmal.” Saag decided to “lift up the rock… and look at the ugliness we experience but don’t talk about.”

When Saag began his medical residency in 1981, word first started spreading about a mysterious “gay cancer.” Saag said one aspect of his book is to show medical students that they can’t really plan their careers — “things happen, and most careers are serendipity… don’t block opportunities that are begging for you to get involved.”

Saag became director of the Center for AIDS Research at the University of Alabama at Birmingham, and is an internationally-known expert on AIDS and the treatment of those with the disease.

For Saag, the opportunity to be involved in fighting this mysterious disease was “a calling.” He was just young enough to miss the social activism of the 1960s and early 1970s. “HIV came along and I found myself in the center of the storm.”

Because the disease started in the gay community, there was — and still is — a great stigma associated with it. Passionate activists had a huge effect on forcing awareness into the public arena.

In the early days of the disease, Saag did something unexpected. When giving presentations on how to treat patients with AIDS, he spoke only briefly about the technical side, and then brought in patients to talk about their personal stories and their struggles with the stigma. “To know how to take care of people with HIV you have to know who the patients are, what they are up against… that goes well beyond a virus.”

Working on changing AIDS from a death diagnosis to a chronic but manageable disease was “invigorating and challenging” while also “horrifying.”

Because it is generally manageable now, there are some who are “in denial” and don’t worry about infection, but Saag said having AIDS is still a big deal.

While most individuals in the book are identified by a pseudonym, there is one in particular that will be familiar in the Southern Jewish community — the story of Rabbi Cynthia Culpeper.

While attending rabbinical school, Culpeper continued to work as a nurse in her native San Francisco. She was accidentally punctured by a needle, and was tested for HIV. At the length of time afterward by which any infection should be detectable, she tested negative.

Then shortly after she started her rabbinate at Agudath Israel in Montgomery in 1995, she became ill, and found out that she had a particularly aggressive strain — and already had full-blown AIDS.

With the permission of Culpeper’s mother and brother, Saag goes into detail about her case and the connection they had. Part of that was the discussion over whether and how to tell her congregation. She did so in January 1996, and the congregation rallied around her.

After a year she resigned her pulpit and intended to go back home, but was receiving far better access to experimental treatments by being in Alabama than she could get in San Francisco, so she moved to Birmingham, where she was active in the community until her death in 2005.

Saag said there is a lot in the book that resonates Jewishly — “trying to give back, be productive and make a difference.” He also noted that the stories of many individuals in the book are “Biblical” in their power.

Saag also wrote about “Jacob,” his first Jewish patient. When Jacob was dying, Saag went to the hospital to visit him one last time.

Recently, Richard Friedman wrote about Saag’s book in the Birmingham Jewish Federation’s daily Update. Rabbi Reuven Tradburks, who was at Birmingham’s Knesseth Israel and now is in Israel, emailed Saag to tell him how Saag’s actions that day had stayed with him.

When Saag got to the room, he said it was a scene from a Rembrandt painting — but instead of “Night Watch” it was “Death Watch.” Jacob’s parents were on one side of the bed, other relatives on the other side, and Tradburks at the foot of the bed. All of them were focused on the heart monitor — would this be the last heartbeat?

Saag saw that and turned off the monitor. In the book he explained that it was to spare the family of “the horror” of an occasional isolated beat that sometimes randomly happens after death and can toy with the emotions of a grieving family.

But there was something else Saag had in mind, which Tradburks still remembers. “At that moment, we stopped focusing on the technology and turned our focus back to the patient in the bed.”

Similarly, the country needs to focus on the patient when talking about health care reform. He said the Affordable Care Act “while not being the right solution” is still “one of the most important first steps in change that our country could have had.”

Since the Roosevelt Administration, presidents have tried to tackle health care but come up empty. He hopes the ACA is “the first step in a series of changes for us to have affordable health care in the future.”

Only in the United States do people go bankrupt because of health care, he pointed out. Two-thirds of all personal bankruptcies in the country “were precipitated by a medical bill,” and three-fourths of those were individuals who had insurance.

Because Obamacare got rid of pre-existing condition restrictions and lifetime caps on payouts, “that is going to be more expensive,” but “you get what you pay for.”

He said the expansion of Medicaid is “vitally needed,” though it is being resisted in many states, including Alabama.

But Saag said taxpayers are already paying for those who are not currently eligible, every time they show up at an emergency room. “They overcharged us for insurance to pay for the uninsured for 70 years,” he said.

With the book now out, Saag is touring, including an April 24 appearance at the Garden District Book Shop in New Orleans, at 6 p.m.

He also is being honored at this year’s Hands Up Together gala for Collat Jewish Family Services, on May 8. His cousin Mary Fisher will be the guest speaker. Fisher, daughter of prominent Republican activist Max Fisher, became a national figure at the 1992 Republican National Convention, where she spoke about being diagnosed with AIDS she got from her second husband.

Fisher has spoken in Birmingham over the years and established a non-profit fund at the Center for AIDS Research at UAB.

While there has been “remarkable success” in the fight against AIDS, that came from a large number of groups working together toward a common goal. That cooperation has been completely absent in health care reform, Saag said. “We’re all pulling apart.”

“We need to look at the big picture of who we were before the Affordable Care Act and where we want to be in the long run when it comes to health care.”