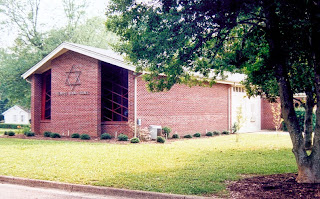 According to reports from congregational leaders, Temple B’nai Israel in Tupelo escaped this afternoon’s tornado with minor damage. Some tree limbs fell on the roof and there was some “minor damage,” but the building is secure.

Many congregants are without power, but at last report everyone was safe.

The tornado went through town around 3 p.m. and heavily damaged some businesses along Gloster Street, including landmark restaurant Vanelli’s. The destroyed businesses are roughly three-fourths of a mile northeast of B’nai Israel.

The Tupelo Daily Journal reported house-to-house searches underway in the neighborhood where the Temple is located. Joyner School, located around the corner, had some trees down and roof damage.

Tupelo’s only Jewish congregation was established in 1939. The current building, the congregation’s first permanent home, was dedicated in 1957.

Update 7:05 p.m.: Sid Salter is reporting via Twitter that the home of legendary broadcaster Jack Cristil, who was the voice of Mississippi State football for over 50 years, suffered “significant damage,” but he was not injured. Cristil routinely leads Shabbat services at B’nai Israel, and his home is about half a mile west of the Temple. Salter wrote the 2011 biography of Cristil.