Eli Gold being inducted into Alabama Sports Hall of Fame 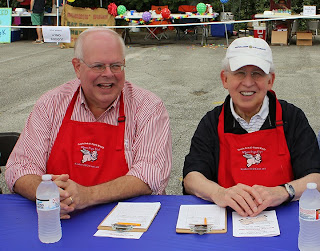 Eli Gold, the golden voice of the Alabama Crimson Tide football radio network, never dreamed that a “Jewish kid from Brooklyn with zero athletic talent would make it into the Alabama Sports Hall of Fame.”

“It is truly an honor to be inducted in a Hall of Fame that includes so many great sports legends and humanitarians,” said Gold, who lives in the Birmingham suburb of Vestavia.

Growing up, Gold’s father was the executive director of the Brooklyn Jewish Community Center. As a teen he took a learning trip to Israel.

It was about the time of his Bar Mitzvah, eighth grade to be exact, that Gold knew what he wanted to do with his life. When asked for his yearbook what job he wanted to do when he grew up, Gold put “sports broadcaster.”

“I was not a good athlete, but I loved sports and traveling. I was a super spectator. I remember spending many nights listening on the transistor radio to baseball announcing legends such as Mel Allen, Red Barber and Vin Scully. The thought of sports broadcasting was so appealing,” he said. “It’s like I have worked for years in the toy store of life.”

Mel Allen, a native of Alabama’s Jewish community, moved to New York and became the Voice of the Yankees. He is also in the Alabama Sports Hall of Fame.

Gold started his career in 1972 as a weekend reporter with Mutual Broadcasting System. He has done play-by-play for the Birmingham Bulls of the World Hockey Association, and the Nashville Predators and St. Louis Blues of the National Hockey League.

He was the first play-by-play announcer for the University of Alabama at Birmingham Blazers basketball team and spent four years as the voice of Birmingham Barons baseball. Since 1976, he has been a member of NASCAR’s Motor Racing Network, serving as network co-anchor since 1988.

That was the year he started at likely what most people in Alabama know him as – the play-by-play voice of the Alabama Crimson Tide football team. He has won the Alabama Sportscaster of the Year Award four times.

“I’ve been down here so long, I think I am considered a native Southerner,” Gold only slightly joked. “There is a passion for sports in the South and I am grateful to have been a part of so many great moments.”