Scott Cowen reflects on his “two presidencies” at Tulane University 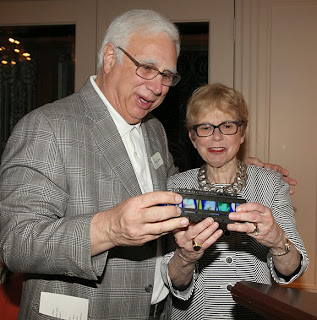 Scott and Marjorie Cowen were presented a Gary Rosenthal New Orleans streetcar Tzedakah box from JNOLA on May 7.

As Scott Cowen completes his 16 years as Tulane University’s 14th president, it really marks the end of two presidencies for him. And as with so many in New Orleans, the dividing line is Hurricane Katrina.

Cowen had been a professor and dean at Case Western Reserve University in Cleveland for 23 years. He was attracted to Tulane because it was “already a highly-regarded and respected institution in the 1990s, but I saw that it still had a lot of upside potential.”

He added that Tulane “was in a part of the country where there is not an overabundance of high-quality highly-ranked universities.”

He also felt “a good cultural fit between myself and the character and values of the people here at the university and in the city.” Though he had not spent much time in New Orleans before, he said he could see himself living there.

After arriving in New Orleans in 1998, the first seven years were a “traditional presidency,” though he cautions that the term can’t “accurately describe being a university president.” There was a plan in place to build on Tulane’s foundation and “increase the impact and the quality of the institution,” and “we were well on our way.”

Then Hurricane Katrina hit in August 2005 as the fall semester was beginning. After the levees broke and New Orleans was inundated, Tulane became “the first major university in the country to close since the Civil War.” With students and faculty scattered across the country, Cowen and his team were tasked with rebuilding the university.

Flooding inundated 70 percent of the campus and the entire downtown health sciences campus.

“A lot of people didn’t think we would survive it, or if we did survive it we would be so diminished that we would be just a shadow of what we were before the storm,” he said. “I could never have anticipated in a million years” that something like this would happen.

Nevertheless, in December 2005 his Renewal Plan was approved by the Board of Trustees, and when classes resumed in January 2006, 87 percent of the students returned.

After the initial survival and recovery phase, the process became an opportunity to reimagine Tulane. The upward trajectory pre-Katrina was replaced with a “parallel” track, and “today we are probably stronger and better than we were before the storm,” he said.

After Katrina, Tulane became the first and only major research university to integrate public service into the core curriculum for all undergraduates.

“That turned out to be a very profound change in the culture and the ethos of Tulane University,” Cowen said. It affected the type of student who came to Tulane and boosted the retention and graduation rates to new highs.

They are sticking around. Eighty-five percent of undergraduates at Tulane are from outside Louisiana. Previously, most of them went back home afterward. “It wasn’t that they didn’t want to stay here,” Cowen noted. “They just didn’t see ample opportunities. Today that is changing dramatically.”

Students are finding opportunities in the non-profit and commercial sectors. Cowen noted that a “very high percentage” of graduates go into Teach for America and other service organizations, with the “vast majority” doing so in New Orleans.

One of the largest employers of Tulane graduates is Tulane itself, he said. Last year about 75 graduates were hired by the university.

Cowen’s involvement with New Orleans as a whole also changed because of the storm. Before Katrina, “I was involved but tangentially,” he said. “Post-Katrina I have been involved very intimately in a number of important initiatives in the city, and I hadn’t envisioned that” in 1998.

He was appointed to the Bring New Orleans Back Commission and charged with leading a committee to reform and rebuild the city’s failing public school system. Tulane chartered a K-12 school in New Orleans and created an Institute for Public Education Initiatives to support the transformation of public education.

He was a co-founder of the Fleur-de-lis Ambassadors, civic leaders who traveled the country to tell the story of New Orleans, that it was an economically viable, livable city with a recovery plan in progress.

Though he is most proud of the reimagining of Tulane after Katrina, and the “culture of engagement” that came from it, there have been numerous other achievements. In June 2008 he announced the successful completion of “Promise and Distinction: The Campaign for Tulane,” which began before the storm. The initial goal of $500 million was surpassed and topped $700 million, making it the largest university fundraising effort in Louisiana history.

Now, Tulane is in the “silent phase” of a $1 billion campaign “and we’re having very good early success.

“I think we have changed the culture of fundraising and philanthropy at the university in very profound ways,” he noted. Also, close to $800 million has been invested in new buildings and facilities on campus.

Tulane is one of only a few universities in the country rated by the Carnegie Corporation in the highest research category and the highest category of civic engagement, and Cowen also points to “extraordinary contributions that faculty and students have made in certain areas of research.”

Despite all that, he acknowledges that “if you talk to some people, they’ll say my greatest legacy is I built a football stadium” on campus. Yulman Stadium is set to open on Sept. 6.

Cowen says he is excited about the stadium and knows it means a lot for a lot of New Orleanians, but it’s not toward the top of his personal list. Still, “that may in many ways be the most visible mark from my tenure as president.”

An area where Cowen has remained visible is his relationship with the Jewish students on campus.

One concern he and his wife Marjorie had before they arrived was the size of the Jewish community in New Orleans, as they were coming from Cleveland, which had a Jewish population of over 80,000 — about nine times that of New Orleans.

Though the community was smaller “relative to what we were used to… we found that it’s not necessarily the quantity, it’s about quality and impact.”

While his wife has been on the Federation and synagogue board, Cowen hasn’t had the time to do that, but they try to be engaged with the community as much as possible. “My wife and I try both institutionally where appropriate and personally to stay very involved.”

At least once a year they host a large Shabbat dinner for students at their home, and do things with Hillel. He said he is very proud of the Goldie and Morris Mintz Center for Jewish Life, the new Hillel building that was dedicated at Tulane in 2011.

On May 7 he hosted a JNOLA event at the president’s residence, attended by about 135 Jewish young adults from the community.

This month he will be speaking at the Jewish Book Council in New York and have a program on his new book at the Uptown Jewish Community Center (see sidebar). He will also be speaking to several Federations as part of the book tour.

He noted an award that will be presented to Tulane by Hillel International this month as recognition of Tulane having “the closest and strongest relationship between a university and its Hillel.”

What is next for the retiring president? Aside from speaking engagements about his book, it is time for a sabbatical, something he has not had in a 40-year academic career. “This will be a new experience for me.”

He will continue his non-profit work in New Orleans, mainly through the Cowen Institute for Public Education Initiatives, which was formed in 2007 as a think-tank to “eliminate the challenges impeding the success of K-12 education in New Orleans and beyond.”

He also plans to go back into teaching at Tulane, most likely the year after next. He has ideas for at least two more books and is a corporate director for several companies across the country, as well as non-profit boards.

In all, it will be “a portfolio of activities that will keep me intellectually and practically engaged in all the things I care about, which are higher education and Judaism.”

The main difference is he will have a little more flexibility in getting it all done.