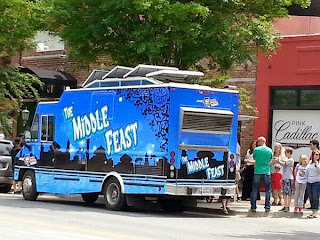 Mobile will be able to have an Israeli-style Middle Feast this weekend, and then watch it on television in a few months.

Three food trucks remain in Food Network’s reality competition “The Great Food Truck Race,” and they are setting up shop in Mobile this Saturday and Sunday. Eight trucks began the show’s fifth season in Los Angeles, and at each stop they have to determine the best location to set up. The truck with the lowest sales is eliminated.

The winner receives $50,000 and a new food truck. Naturally, Tomy Marudi hopes his truck, The Middle Feast, is the last one standing.

Marudi’s truck specializes in Israeli-American fusion cuisine. Joining him in the truck are his sister, Hila Marudi, and his best friend, Arkadi Kluger.

On Wednesday, they traveled 15 hours from Saint Louis, their previous stop. There, they set up outside a brewery and Ballpark Village, competing with the Lone Star Chuckwagon, Let There Be Bacon and the Beach Cruiser.

Marudi noted that it was a slow trip to Mobile, because the trucks really aren’t built to travel long distances, and they had to keep under 60 miles an hour.

In Mobile, the trucks will compete from about noon to 8 or 9 p.m. both days. They were scheduled to scout out locations on Friday, then plaster their Facebook and Twitter accounts with the information. But, he said, “this game is crazy and it can change all the time.”

The Middle Feast announced its May 31 location will be on Dauphin Street downtown, across from the Brickyard, between Joachim and Jackson Streets.

Born in Los Angeles, Marudi has been interested in cooking from a “very young” age. When he wanted to quit school, his uncle told him that if he did, he would have to go to work. He started as a dishwasher in his uncle’s Tel Aviv restaurant and “slowly worked up.” His culinary experience is “life experience, and I love it.”

At age 21 he returned to Los Angeles and started working at Aroma Bakery and Café. He displayed a talent for reinventing dishes, and eventually opened his own kosher establishment, Paprika Grill, which was recognized by Los Angeles Magazine as having the best Israeli breakfast in the city.

Currently, he works at Toast Café, a kosher dairy restaurant in Sherman Oaks.

Two years ago, his wife sent in an application for the show, and a couple of months ago “they called and said they were very interested, and asked us to send a bunch of information and video.”

Marudi said the competitors are food truck rookies. With his background “I knew how to cook, but this is my first experience with food trucks.” At first “I just wanted to be on the show,” but he has discovered “how cool it is” to run a food truck, “and how profitable it is.” He noted that it is very hard “but very satisfying.”

Now, “I’m bringing my flavors to the streets.”

After starting in Santa Monica, the trucks traveled to Tucson, Austin, Oklahoma City and St. Louis.

The teams are free to do their own publicity, and the eliminated trucks do not continue on as decoys. The only rule, Marudi said, is that he cannot say the name of the show, nor what network it is on. Tyler Florence hosts the show.

When Middle Feast left St. Louis, they did not know which of the other trucks had been eliminated, nor do they know their next destination until after they finish in the current city.

The Middle Feast updates fans about their location online. The St. Louis Jewish Light reported that several synagogues offered their parking lots for the team, but sustained foot traffic for the whole weekend is the key to success — and the truck isn’t kosher.

Marudi also spoke with the Mobile Area Jewish Federation to get suggestions about where would be best to set up in the “other” L.A. — Lower Alabama. This is his first time in the Deep South, he said.

Now that there are only three trucks remaining in the competition, Marudi said “the game is on.”