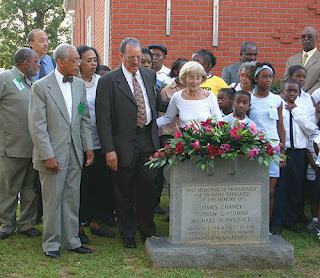 The summer of 1964 became known as Freedom Summer as large numbers of activists and volunteers descended on Mississippi during the height of the civil rights struggle. They sought to register as many African-Americans as possible to vote, and established Freedom Schools.

A large proportion of the volunteers were Jewish, estimated at over 1,000, and in June two of them, along with a local African-American activist, disappeared in Neshoba County. Their bodies were found weeks later underneath an earthen dam in one of the most notorious murders of that era.

In June, there will be a major Freedom Summer 50th anniversary gathering centered at Tougaloo College in Jackson. Activists, elected officials, students, scholars and veterans of the movement will gather for the June 25 to 29 reunion. About 3,000 participants are expected.

In conjunction with the event, the Goldring/Woldenberg Institute of Southern Jewish Life is organizing programs to highlight Jewish activism from 50 years ago through today. The ISJL is partnering with national Jewish organizations that work for social justice to offer programming that will give a contemporary Jewish presence while honoring the legacy of the Jewish volunteers from the 1960s.

Rachel Myers, ISJL special projects coordinator, said she and Director of Community Engagement Malkie Schwartz were inspired “to offer programming that gives participants an authentic experience in the state in which the campaign occurred, exchange ideas with local and national activists, and most importantly show that Jewish activism is still alive and well, not just a story from 50 years ago.”

While in Mississippi, Jewish social justice advocates will have the opportunity to learn from veterans of the Civil Rights Movement and fellow advocates about the work that lies ahead. Programming will provide the space for people to learn about Jewish activism during Freedom Summer and the work of Southern Jewish communities today.

Among the veterans taking part is Larry Rubin, who came to Mississippi in 1964 from Philadelphia, Pa. An organizer with the Student Nonviolent Coordinating Committee from 1961 to 1965, he started in Georgia and then went to Mississippi.

“This event will commemorate Freedom Summer by discussing tactics and strategies for meeting today’s injustices,” Rubin said. “Economic inequality is greater today than it was in 1964. Voter suppression laws are rampant. The Freedom Summer 50th is planned to be a watershed event in planning for the ongoing civil rights struggle ahead, and I hope Jews and all other activists will attend this important gathering.”

Myers said the week “will not be a typical commemoration, but a launching pad for social action focused on four closely-related issue areas: Education, Workers Rights, Healthcare, and Voting Rights within Mississippi and the nation.”

Among the national groups taking part is Bend the Arc, A Jewish Partnership for Justice. Stosh Cotler, Bend the Arc CEO, said the organization is excited to be participating. “The hard-won victories from that summer — including the Voting Rights Act — are in jeopardy today, making it meaningful and even urgent for all of us to come together, learn, and continue the vital work of protecting the right to vote. It is especially poignant to gather together in Mississippi, where Freedom Summer culminated.”

A dinner for Jewish participants is planned for June 26, and organizations will be able to share information about their work.

The ISJL will host a Lunch and Learn at their office at noon on June 27. During the afternoon there will be a panel on the history of Jewish Freedom Summer volunteers.

At 5 p.m. on June 27, Beth Israel will host a Shabbat service and community discussion among scholars, volunteers and Jewish social justice professionals on the experience of being an “outsider” working in diverse communities.

Additional programs on June 28 include a breakfast discussion on current initiatives, a tour of Jackson and a Call to Action moving forward. These sessions are open to the Freedom Summer 50th conference and planned to complement the other sessions at Tougaloo.

In Neshoba County, where the murders of Andrew Goodman, Michael Schwerner and James Chaney took place, the Philadelphia Coalition will hold 50th anniversary events the week of June 15. A kickoff event will be held at Mt. Zion United Methodist Church at 3 p.m. on June 15.

The church is where Klansmen beat church officers and set the church on fire on June 16, 1964. On June 21 of that year, the three civil rights workers arrived to document the beatings and arson before they were abducted. They have held memorial services for the three every year since then. The first community-wide service was held in 2004 for the 40th anniversary.

Civil Rights tours will be held in Neshoba County throughout the week.

On June 20 at 7 p.m., there will be a program at Mt. Nebo honoring local heroes.

The Louisiana CORE Legacy Committee is organizing “Freedom Summer and Beyond” from June 21 to 23 to commemorate the 1960s and examine “what we can and should be doing to address the many contemporary problems in Louisiana and in the nation.”

In October, a group of young Jews will visit the region through TENT: Encounters with Jewish Culture, a traveling seminar hosted by ISJL and the Yiddish Book Center. The participants will visit sites from New Orleans to Memphis.