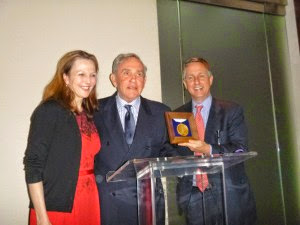 The Israel Museum in Jerusalem just opened a major exhibit of Japanese screen art, and it’s a story from New Orleans.

“Unfolding Worlds: Japanese Screens from the Gitter-Yelen Collection” opened on June 7 and will be displayed through the end of November. The 18 screens reflect the range of topics covered by Japanese artists, as well as the cultural attitudes and ideals from the 18th to 20th centuries.

The screens come from the collection of Kurt Gitter, a New Orleans ophthalmologist and retinal surgeon, and his wife Alice Yelen Gitter. In 1997 they founded the Gitter-Yelen Foundation for the study and preservation of Japanese art and American self-taught art.

Over 100 scholars from around the world have visited the Gitter-Yelen Study Center to conduct first-hand research on paintings, sculpture, and ceramics in the collection.

Selections from the collection are displayed in quarterly rotating exhibitions at the New Orleans Museum of Art, and over the last 30 years works have been donated and displayed at museums world-wide.

Gitter was born in Vienna in 1937. His first birthday was the Anschluss, when Austria was annexed by Nazi Germany. Nine months later, he and his parents left Vienna and made their way to the United States. Many close relatives did not leave and were lost in the Holocaust.

Gitter’s interest in art developed at an early age. While in medical school in New York, “I didn’t have any money but I went to all the galleries” to exercise that passion.

After graduating from medical school, he was drafted by the Air Force. Yelen explained that the military needed doctors, and Gitter was sent to Kyushu, Japan. If you lived off-base, she said, it was just a two year commitment.

While in Japan, Gitter “fell in love with Japan, the country, the food, the environment.” He grew up on concrete streets, and now he was “in a rice village in the country.”

Fifty years ago, when he started collecting the Japanese paintings, “things were not terribly expensive.” Now, he added, “they are very expensive — and I’m still collecting.”

He started by focusing on Japanese Edo period painters from the 16th to 19th centuries, an area that was not widely collected.

As the collection grew and he developed his successful medical practice in New Orleans, he started lending and then donating works to the New Orleans Museum of Art, helping develop its Asian art collection.

Yelen, who is currently the senior curator of collections research at NOMA, said Gitter “got Japanese art on the map” at the New Orleans museum.

By the mid-1980s, Gitter was a trustee of NOMA and on the board of other arts institutions across the country. He met Yelen, who at the time was assistant to the director at NOMA. She had studied Japanese art and history at Columbia University.

They soon married and the collection continued to grow — and took an additional direction. In 1988 the museum had a show of works by New Orleans native Sister Gertrude Morgan. They were profoundly affected by the self-taught artist, and when the largest collection of her works — 50 pieces — became available, they bought it.

From that start, they embarked on road trips to find other self-taught artists throughout the South, as most of them were still relatively unknown. They acquired works by Thornton Dial, Mose Tolliver, Charlie Lucas, Jimmy Lee Sudduth, Clementine Hunter and Mary T. Smith.

Yelen wrote “Passionate Visions of the American South,” chronicling many of those artists. For them, a major attraction to collecting self-taught art is also the relationship and friendship they develop with the artists.

Douglas Hyland, who was director of the Birmingham Museum of Art, approached them about doing an exhibit from their self-taught art collection. Gail Trechsel organized the 1996 exhibit, “Pictured in My Mind: Contemporary American Self-Taught Art.”

Yelen noted that while the Gitter-Yelen Foundation promotes scholarship in the field, the individual museums organize the exhibitions and produce catalogs. The Japanese art has been displayed in Australia — and in Japan.

Having an exhibition in Japan was “quite an honor, because they have plenty of Japanese art in Japan and they don’t need to bring it in” from another country, she said.

On April 3, Gitter was given the Distinguished Service Award from the United States-Japan Foundation in Washington. The award was established in 2005 to honor American and Japanese individuals for their lifetime commitment to promoting friendship and understanding between the peoples of the United States and Japan.

Gitter is the first recipient who was not a “major political or business figure.” Several past recipients were ambassadors, including Walter Mondale, or chairmen of major international corporations.

The foundation recognized Gitter for “his extraordinary contributions to American appreciation of Japanese culture by facilitating exhibitions, publications, and scholarly research through his Japanese art collection.”

Gitter has been a member of the board of directors of the New Orleans Museum of Art for the past three decades, and he has also served on the boards of Johns Hopkins University, the Freer and Sackler Galleries of Asian Art at the Smithsonian Institution, and the visiting committee of the Boston Museum of Fine Arts.

Gitter and Yelen have always had an interest in Israel. Gitter has a sister in Jerusalem, and through the years they have given paintings to the Israel Museum. After organizers at the museum saw a publication from a previous exhibition of the Japanese screens, “they came to us and asked to do an exhibition.”

They want to help develop the field of Japanese art in the Middle East. Yelen said “they do have some budding scholars there now,” and through this exhibit the museum will bring some major Japanese art scholars to meet with the young Israeli scholars.

A major international symposium on Japanese art will be held in conjunction with the exhibit, on Oct. 20 and 21.

The curator, Miriam Malachi, is writing a catalog for the exhibition.

The opening reception was held on June 6. The exhibit will be displayed through Nov. 27 at the Ayala Zacks Abramov Pavilion for Israel Art.