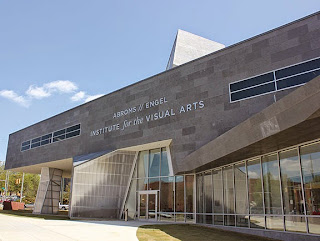 Across the street from the Alys Stephens Center at the University of Alabama at Birmingham, the Abroms-Engel Institute for the Visual Arts is changing the art world in Birmingham. And many in the local Jewish community played a major role in making it happen.

Opened in January, the institute houses three galleries with adjustable walls to make one large space. Upstairs there are numerous state-of-the-art classrooms, art and design studios and faculty offices.

Curator John Fields said the idea was to have a medium size to large-scale contemporary exhibition space, something that has been missing in Birmingham because of limitations at the Birmingham Museum of Art’s facilities.

The 6,000 square feet of exhibit space will be dedicated to contemporary art. There will be a mix of student shows and shows from local, national and international artists.

The choice to focus on contemporary art was to not compete with the BMA, with whom the institute has a great relationship.

Much of UAB’s 600-piece permanent art collection has been stored at the downtown museum because of a lack of climate-controlled storage facilities. That void is also being met by the Institute.

Key to the Institute’s completion were Judy and Hal Abroms.

The Abromses first became involved with UAB in 1985 as the Hess-Abroms Scholarships were established in the university’s honors program. Abroms was asked to chair the advisory board, and he said UAB has been “very good from the very beginning in keeping us in touch with our students,” many of whom have gone on to impressive achievements, including two Rhodes Scholars.

In 2005 Abroms was asked to be the interim vice president of development for a year, which he did as a volunteer. In 2006, “we had an opportunity to make a significant gift somewhere and we hadn’t really done anything for UAB” since the scholarships. He approached then-president Carol Garrison, who presented him with three ideas.

The one that resonated was an art museum and teaching facility. “We didn’t know what it was going to cost, who was going to be the architect,” he said. “The only thing we knew was where it would go.”

The art facility had been a dream of Bert Brouwer, dean of the school of arts and humanities, for years.

Fields noted that when he was a student at UAB, Brouwer said the facility would be finished before he graduated. He graduated in 2003 and got his Master’s from the University of New Orleans in 2007. “I was told I’d be in the first class to graduate from this building. Now I’m the first employee,” he said.

After an architect was selected, Shirley Salloway Kahn, who had become the vice president of development, called Abroms and said they had a dollar figure for the building, but he really ought to bring a friend because it was a large amount.

“We knew Marvin Engel loved the arts too, so it was a perfect fit for us,” Abroms said. After that, he quipped, “we went to our friends who always came to us” to fundraise. “We had some people who really stepped up.”

The facility’s lecture hall is named by the Hess family, the Elsas family did the seminar room and the grand atrium was named by Gail and Jeffrey Bayer. Numerous other families in the Jewish community also made contributions.

In April, the Institute housed the 38th annual juried exhibit of student art. A nationally-known figure in the art world judges the works, and some space is offered to that artist.

This year, the guest exhibit was based on a Bar Mitzvah photo. George Ferrandi did an installation called “The Prosthetics of Joy.”

Ferrandi’s works respond to the specifics of a site, audience or situation, employing whatever medium is best suited for the task. Based in Brooklyn, Ferrandi made news recently with her “daring” site-specific performance piece, “it felt like i knew you,” which tests the limits of a subway car’s shared spaces.

At UAB, she spent a week building forms that re-created poses from a large group photo at a nephew’s Bar Mitzvah party. On March 20, about 60 students and faculty members got into those forms to create a photo reminiscent of the original. The prosthetics were then displayed the rest of the month.

In late August, New York artist Amanda Browder will drape two huge fabric installations to celebrate the new UAB Cultural Corridor. Magic Chromacity will drape both buildings starting on Aug. 26. Sewing days are set up from July 9 to 12 for members of the community to take part in the works’ creation.

Faculty members from other divisions of the university are contacting the Institute to develop interdisciplinary lessons, tying art to their departments.