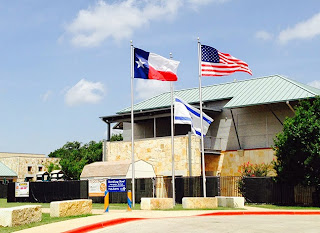 Israeli flag at half staff outside the Jewish Community Center in Austin.

With the discovery of the bodies of three missing Israeli teens, planned vigils have turned into memorial services.

The Israeli Consulate in Atlanta stated “we are heartbroken to report the senseless killings of the three Israeli teenagers, Eyal Yifrach, 19, Gilad Sha’ar, 16, and Naftali Frenkel, 16, z”l, who were kidnapped near their school on June 12” by Palestinian terrorists presumed to be aligned with Hamas.

Their bodies were found in a field near Hebron on June 30. The discovery set off a wave of mourning throughout Israel and worldwide.

Numerous groups immediately issued statements of solidarity, and even the United Nations Security Council expressed “profound outrage” at the murder.

Frenkel was a dual citizen of Israel and the United States.

The Israeli consulate, Atlanta Rabbinical Association and the Jewish Federation of Greater Atlanta are holding “a demonstration of solidarity and support” with a memorial service at Ahavath Achim, July 2 at 6:30 p.m.

The Jewish Federation of Greater New Orleans was “devastated” to hear about the murders. “The abduction and murder of these three is a vile act of terrorism.”

In a statement, the New Orleans Federation said “People everywhere have prayed in hope, because every child counts. Today we stand united in expressing our outrage, in sending our sympathy to the families and in expressing our hope for peace and security for children everywhere and in the Middle East.”

A vigil had already been planned for July 2 at 7 p.m. at the Uptown Jewish Community Center in New Orleans, it will now be a #PeaceForOurBoys memorial. Attendees will light memorial candles for the boys.

Rabbi Ethan Linden, president of the Rabbinic Council of Greater New Orleans, and Brenda Brasher, chair of the Jewish Community Relations Council, will speak. Their organizations are planning the event.

Cantor Joel Colman of Temple Sinai will also speak. His son, Josh Colman, is a soldier in the Israel Defense Force.

“Our community is deeply saddened by the murder of these three teenagers,” said Linden “We condemn those responsible for the act itself, and we condemn those who would attempt to justify this horrific crime by reference to Israeli policies. We reject the culture of violence and vengeance that inspired this taking of innocent life, and we stand by our brothers and sisters in Israel as they mourn the loss of these children. We hope and pray for peace.”

“This is not about politics,” noted Brasher. “This is about innocent lives. It’s an issue of human compassion and a concern for the balance of peace and justice in the wake of unimaginable grief.”

In Birmingham, the Hillel at the University of Alabama at Birmingham is coordinating a candle prayer vigil on July 2 at 6 p.m., on the Campus Green off University Boulevard between Heritage Hall and the recreation center. Rabbi Randall Konigsburg of Temple Beth-El will speak.

The Birmingham Jewish Federation expressed its “profound grief and sadness,” and said “This is a time for the Jewish world to stand together, not only with these three families, but with the entire State of Israel in unity, solidarity and sadness.”

The leadership of Temple Beth-El stated the congregation “mourns with the entire state of Israel the death of the three teens” and prays “for a time when all people, men, women, and children, will be able to ‘sit under his grapevine or fig tree with no one to make him afraid’ (Micah 4:4).”

Birmingham’s Jewish community had held a service for the boys on June 22, while they were still missing. Rabbi Eytan Yammer of Knesseth Israel, who organized the event with all of the local congregations, said that evening he had felt the “love of a unified Jewish world calling out to their creator.”

Though the unity now turns to mourning, Yammer said “I am still filled with hope. That the unity of Am Yisrael is not broken by the murder of our sons, that we find times to gather once more, at times of hope, at times of loss and, with God’s help at times of great celebration.”

Huntsville’s Jewish community will be joined by local Christians and Muslims for a memorial service on July 2 at 7 p.m., at Temple B’nai Sholom. Aladin Beshir, a NASA scientist, will offer prayers for peace from the Islamic tradition.

Beshir told al.com that “”This is a funeral in my neighbor’s house, and regardless of whether we agree, disagree on occupation, these are neighbors who are mourning… Any bloodshed — any drop of blood shed, whether Christian, Muslim, Jewish, Atheist — it doesn’t matter — is prohibited.”

Rabbi Scott Kramer of Agudath Israel-Etz Ahayem in Montgomery said in light of the news, “I am afraid of what is now going to happen in light of the danger posed by ISIS having its sights against Jordan and now this. I pray for Israel and I send comfort to the families of these three boys. I can only hope that our boys and girls in arms will protect our land and our people and calmer heads prevail as we search for the ever disappearing “better angels of our nature.”

In Houston, the community will hold a memorial service on July 2 at 6 p.m., at Beth Yeshurun.

On July 2 it was reported that a Palestinian youth had been found murdered in Jerusalem. While it is unclear if it was in revenge or a non-related criminal act, the murder was swiftly condemned by Prime Minister Benjamin Netanyahu and Jerusalem Mayor Nir Barkat, along with a wide range of Jewish organizations and family members of the three slain Israeli teens.

Israel Defense Forces are reporting that it likely was an “honor struggle” within the family, as the victim’s brother had been taken in a similar fashion the week before, and family members are being interrogated.