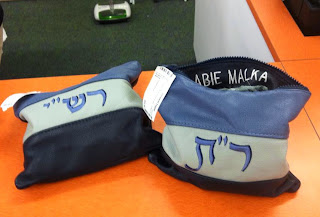 When Rabbi Uri Pilichowski and family stopped in Scottsboro at the Unclaimed Baggage Center on July 2, it was just another interesting place to see on their cross-country adventure.

It quickly turned into much more than that for the Boca Raton, Fla., family, as they found seven pairs of tefillin, setting off an Internet odyssey to return the sets to their owners.

Unclaimed Baggage purchases truckloads of suitcases from airlines, rental car companies and unclaimed cargo after the respective carriers have exhausted all avenues to return the lost items to their owners. The items are sold at the north Alabama store, and unsold items generally wind up going to charitable organizations.

Pilichowski’s wife, Aliza, had read about the store and figured it would be an interesting place to visit. They were driving from Baltimore to visit her sister in Memphis, and Scottsboro “was only slightly out of the way,” he said.

Four years ago, they set a goal of visiting all 50 states by the time their daughter Avigayil graduated from high school. Since then they had moved from California, where he was assistant rabbi at Beth Jacob in Beverly Hills, to Florida, where he was at Boca Raton Synagogue and started an Israel advocacy group for high school students.

At the start of this summer they had been to 35 states — and had taken Alaska and Hawaii out of the challenge. With their decision to move to Israel later this summer, “it put a rush on our plans” to hit the remainder of the Lower 48, and they set out from Oregon to Maine before heading back to Florida.

Pilichowski said his wife found the sets of tefillin, which were marked at $45 each. “She immediately started crying” because she was sad to see them unclaimed. She quickly called him over to see what she had discovered.

He noted that in Jewish law there is a prohibition on turning away from a lost item, and a commandment to try and return items to their owners.

“We bought them all,” he said, and they quickly took pictures in the store and posted their find on Facebook, with “HELP! HELP! HELP!… We found Tefilin!!! People are missing their tefilin! Please share this entire post.”

That post was shared over 1700 times, and within a day, six of the seven sets had been claimed.

The name “Abie Malka” was on two pairs of the tefillin, so Pilichowski contacted Yossi Malka, a fellow counselor from several years back at a Passover camp in Ukraine.

Yossi Malka confirmed that they were indeed his oldest son’s, having been given to him by his grandfather, Dovid, shortly before his passing in 2011, in anticipation of Abie’s Bar Mitzvah. They became lost in Charlotte, N.C., on a Passover trip to Cancun.

Dovid Malka of Crown Heights was a chef for the Lubavitcher rebbe and Oholei Torah.

When they were lost, Yossi Malka explained to the New York Daily News, “it was devastating. I did not want to share it with the rest of my family.” He even returned to the Charlotte airport to search the lost-and-found.

Though six pairs were identified quickly, the last pair proved more challenging. It was the only one that did not have a name or initials.

According to VIN News, an Israeli man whose daughter is friends with the Pilichowskis reposted the story on Facebook and then set out to find the owner.

A sticker on the tefillin indicated they had been checked at a store in Holon, so Ami Mintzer contacted the store’s owner, who found the sofer who had checked the tefillin. He was able to verify that they belonged to Emilion Maimon of Bat Yam, whose suitcase was lost while traveling from Mexico to Denver last December.

In all, two pairs belonged to Israelis, the Malka sets went to Los Angeles and the others were reunited with owners in New York.

In a post reflecting on the odyssey, Pilichowski said “After a tragic week, in which our people collectively sat in mourning over three kedoshim, the speed in which the owners were found speaks not only to the power of crowdsourcing, but to the importance of following God’s commands, the resilience of our people, and our nation’s ability to come together in good times and bad.”

He added, “Thousands participated in this mitzvah, and it is a tribute to them that the owners were found.”

After leaving Memphis on July 8, the Pilichowskis headed back to Boca to get ready for their Nefesh B’Nefesh flight to Israel — with one more stop in Scottsboro.

“No more tefillin” on the return visit, he said. But “they knew what we were talking about this time.” Anyone who wants to look for sets of tefillin in the future should check the jewelry department, he added.

Because they are moving to Israel, this will likely be his last time through Scottsboro.